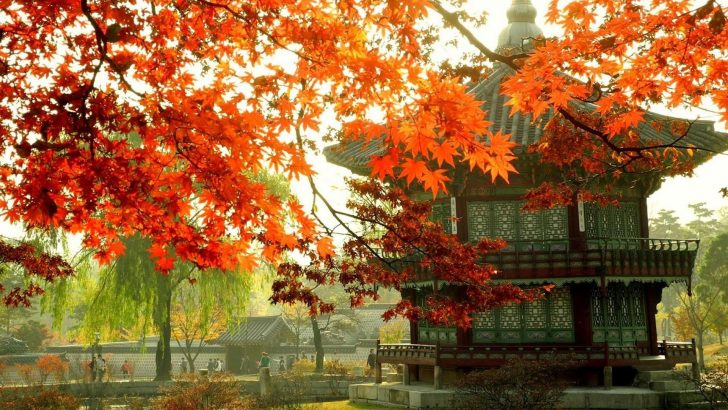 South Korea, officially known as the Republic of Korea is a country located in East Asia.

South Korea occupies the southern half of the Korean Peninsula, sharing borders with North Korea, obviously to the north, China across the sea to the west, and Japan a short ferry ride to the southeast.

Seoul, South Korea’s capital and the powerhouse of Asia’s third-largest economy, is an attraction all by itself!

This city that never sleeps is a heaven for those yearning to experience some adventure in contemporary Asian surroundings: on every corner, you can find flawlessly reconstructed palaces that stand side by side with glowing night markets and the latest technological wonders.

Since it’s not too large of a country, serenity can be found just around the corner from the urban noise.

Just next to the densely forested national parks, you can find mountains that turn into amazing ski centers in winter.

You can also go sailing to remote islands, go farming and fishing with the folk people, and relax in tranquil villages surrounded by rice fields.

South Korea is overall, very safe and you will probably encounter no problems when traveling there. Still, do not let your guard down and be vigilant at all times.

Tourists are exposed to risk whenever crossing the street since in South Korea risky behavior is common when it comes to traffic. The Republic of Korea has one of the highest rates of traffic deaths for a developed country. Check the road twice before crossing the street. Also, watch out for taxi drivers trying to overcharge you: it is recommended to refrain from using unofficial taxes.

Since South Korea is a somewhat popular tourist destination, it is expected that pickpockets operate in larger cities. Petty theft is the most common form of crime in South Korea, but following basic precautions, rules should take care of this issue.

South Korea is safe when it comes to mugging or kidnapping, though precaution is still advised. Avoid poorly lit streets and areas, and people offering you free drinks.

Even though there haven't been any terrorist attacks in South Korea's recent history, there is heightened tension between South and North Korea, so precaution is recommended.

There is a risk of someone scamming you in South Korea since there are a lot of scammers and con artists on the streets of this country. The most notable among them is the Teahouse scam with girls saying to tourists that they want to practice conversing in English, which usually ends in a teahouse with a huge bill. Other forms of scams are mostly overcharging in cafes and restaurants, with a separate menu just for tourists.

So... How Safe Is South Korea Really?

South Korea is a very safe country to visit.

Its crime rates are much lower than in the US and on par with most European countries, Japan, Singapore, and Hong Kong.

This mostly means that, for tourists and anyone else, it is perfectly safe to walk around at night, even in the larger cities.

Only foreigners and tourists looking for trouble could end up in one, and this usually applies to drunker or intoxicated visitors, provoking fights in bars.

However, if you do find yourself in a situation concerning anything police can help you with, they are mostly at every corner, and even though they don’t speak English, they have interpreters on-call that can help you.

Another issue in Korea is the problems that Korean motorists cause to its traffic.

They sometimes speed through pedestrian crossings, go through red lights and have no problem passing within a hair-width distance from pedestrians and other cars.

Traffic lights do not mean much to these drivers, so be careful when crossing the street as you never know where they can jump out from.

Generally, the streets of South Korea and their traffic culture is not too safe, and it is safer to use underground passageways.

Also, keep in mind that even though an armistice was established between North and South Korea in the 1950s, these two countries are, officially, still at war.

In the light of recent events that made the tension between them very high, there is general fear that a new war might result in tragic consequences and casualties, so, by all means, get informed on current events in the region before traveling there.

How Does South Korea Compare?