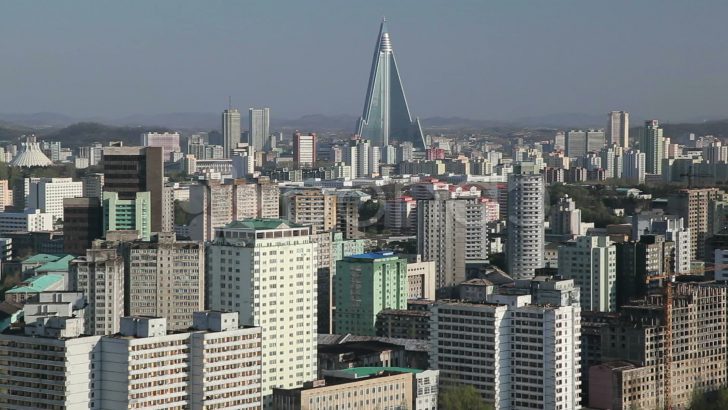 North Korea, officially referred to as the Democratic People’s Republic of Korea is a country located in East Asia covering the northern half of the Korean Peninsula that is situated between Korea Bay and the East Sea.

This country is under a totalitarian dictatorship and after its complicated history, travelers generally are skeptical when it comes to visiting this country.

Tourists that do travel to North Korea will be immediately met by a tour guide from a local state-owned travel company who will decide what they can and cannot see.

Traveling independently isn’t possible, and you can see North Korea only as part of a guided tour.

When traveling to this county, your movements, freedom, and behavior will be severely limited.

As soon as you step out on the street, you will be accompanied by one or more guides.

Usually, the sightseeing is limited to war memorials, monuments to the Great Leader and the Workers Party of Korea, and war-related museums.

Another popular landmark for tourists is The Demilitarized Zone (DMZ).

Generally speaking, North Korea isn't safe and some governments advise their citizens against traveling to this country. If you're already in North Korea and if you don't abide by its strict rules, you can be faced with imprisonment, torture, and death.

The fact that all your traveling is completely controlled by the state is also helpful when it comes to transport, as all your transport needs will be dealt with by your tour company. Using any other form of local public transport is generally impossible.

The biggest natural threats for North Korea are devastating floods. Typhoons have also been known to cause damage. In 2002, a flood occurred that killed 170 people and left 84,000 homeless.

The same goes for violent crimes, like muggings, robberies, and kidnappings. Even the nightlife in Pyongyang is extremely safe and non-violent.

There haven't been recent terrorist attacks in North Korea, but they shouldn't be ruled out, so you should remain vigilant and be aware of your surroundings at all times.

There aren't many known scams in North Korea. Generally speaking, ways of crossing over tourists are limited given the fact that traveling independently is impossible in this country and everything is strictly controlled by the state.

Women are safe when it comes to crime in North Korea, but you should know that if you have any needs as a tourist, or won't help, the assistance from your embassy will be limited and due to strict dictatorship in this country, your actions and behavior here will be limited and in that sense, North Korea can be dangerous.

So... How Safe Is North Korea Really?

North Korea’s history and political situation are complicated and extremely strict, being that this country is under a totalitarian dictatorship.

Due to this and the uncertainty caused by North Korea’s nuclear weapons development program and related tension in the country, some governments strongly discourage traveling to North Korea.

If you go to North Korea and do not abide by its strict laws, be prepared to face imprisonment, torture, and even death.

North Korea and the US have had a complicated history and relationship for decades.

As of September 2017, all American residents with a US passport will not be allowed to travel to North Korea without having special permission from the US State Department.

You should keep in mind all the time that North Korea in general places blames on America for starting the Korean War, and you should, under no circumstances, disagree with that viewpoint as you might get yourself in trouble.

Also, the country is covered in landmines and dotted with minefields so you mustn’t stray from your group as it may have deadly consequences.

Do not take photographs as this is a huge issue in North Korea and only some places are allowed to be photographed, like the “peace village” Panmunjom.

How Does North Korea Compare?