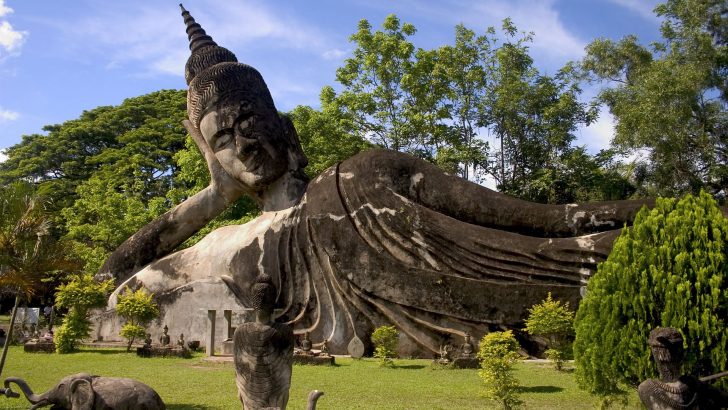 Laos is a landlocked country, officially referred to as the Lao People’s Democratic Republic, that shares its borders with Vietnam to the east, Cambodia to the south, Thailand to the west, and Myanmar and China to the north.

This mountainous country is known to be one of the poorest nations in Southeast Asia.

However, its biggest appeal is that it is, undoubtedly, the least Westernized country of all Indochinese nations.

It’s relaxed and, with that, authentic vibe attracts more and more tourists every year, though Laos, until recently could’ve been described as a forgotten Asian country.

Though it’s so poor, it offers a bunch of natural wonders to visitors: the wonderful Mekong River and its tributaries create what could be described as the most popular and attractive geographic attraction of Laos.

If you continue further north, you will encounter the more hilly part of the country, where the remote jungle is less explored.

North is where the nature lovers will find their paradise – visit Luang Namtha, the far-northern town where you can truly remote Lao wilderness, and see firsthand the culture of the many hill tribes of this region.

Overall, Laos is relatively safe, but there are extremely high rates of both petty crime and violent crime due to the poverty of the population. You should be vigilant and take all possible precaution measures in order to minimize the risk of something going wrong.

Transportation conditions have improved a lot in the past couple of years in Laos. The highways of Laos have improved a lot and taking buses and trucks have become popular with travelers. Just be careful when it comes to pickpockets and always negotiate the fees before entering the vehicle.

There are many natural disasters that Laos is exposed to throughout the year, such as droughts, flooding, cyclones, and various disease epidemics. However, the most dangerous natural disasters are floods due to tropical storms that, in the past years, have been causing serious damage and hundreds of thousands of deaths.

Violent crime is not unheard of in Laos. The chances of getting mugged or kidnapped are low, but there are areas that are best avoided. Recently, this country has seen a rise in robberies and muggings, so keep your belongings tightly by your side.

There haven't been any terrorist attacks in Laos' recent history but they shouldn't be ruled out. Be aware of your surroundings at all times.

There are a couple of scams in Laos, the most popular being the bus drivers stalling their driving routes and then dropping you off to a "good guest house they know" where your only option is to spend the night.Actually, most scams take place at bus or train stations where only the locals know the real fees. Always negotiate your prices before getting into vehicles.

Laos is relatively safe for female solo travelers. Sexual harassment does occur, though rarely, but you should still be careful. Apply basic precaution measures - avoid wearing purses and do not walk alone or roam around deserted or poorly lit streets and areas.

So... How Safe Is Laos Really?

Laos is relatively safe to visit.

Crime levels are low in Laos, but you should expect instances of pickpocketing and bag snatching since this is a poor country with an authority that doesn’t have the power to stop these petty crimes.

Violent crime is also not unheard of and there were reports of a robbery at gunpoint in the big cities.

Bear in mind that Laos is one of the world’s most corrupt countries, though it doesn’t affect tourists that much.

Corruption in this country has been getting worse during the last four years, and the appalling cases involving the police include people getting arrested simply for sitting near someone who had drugs on them.

Having drugs planted on you is also an issue, and authorities in Laos don’t seem to mind the difference between using drugs and dealing them.

This happens not just in Vang Vieng, but also in Vientiane and Luang Prabang.

Be sure to always have your passport with you When in Laos, as you may be asked to show your ID at any time and if you don’t have it, you may have to pay a fine of 100,000 kips.

Copies of your passport and visa will do, and it is actually recommended you carry them instead of the originals.

Avoid allowing hotels to make the copies of your passport or visa as they might sell them for extra money, and use them in illegal money laundering operations.

How Does Laos Compare?