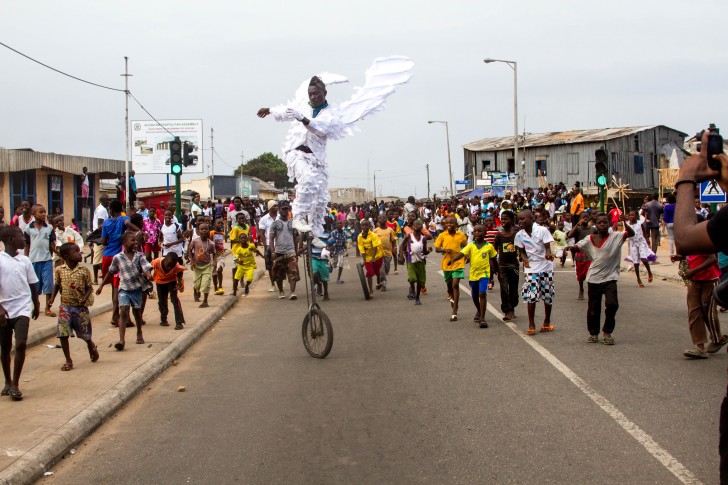 Ghana, a country that means “warrior king” is located in West Africa, bordering with Côte d’Ivoire to the west, Burkina Faso to the north, and Togo to the east.

It is a very friendly country and is recommended for tourists who have never been to Africa and want to get a sense of what it’s like before venturing into its depths.

The people of Ghana are warm, welcoming, and willing to help at all times.

They are known for being laid back and not caring too much about being organized and reliable, and while it can be annoying for some, others find this as one of the country’s charms and adorable quirks.

Tourism in Ghana is growing quickly and it is becoming a desirable travel destination.

Since it is rich in gold, it is a stable country with a lot of potential for growth, and with a low crime rate compared to other African states.

Ghana is relatively safe, although you should consult your guidebooks and forums on the internet before traveling there, since they may help you prepare for suspicious activities, frauds, and petty crime going on in Ghana.

Means of transport are relatively safe in Ghana but you should be very cautious because there have been reports of passengers in taxis being robbed by drivers. There have also been incidences with impostors posing as the tourist's taxi drivers at airports and then try and extort money from them upon entering the vehicle.

Pickpocketing definitely exists in Ghana, as does mugging and theft of valuables. Beaches are often the hotspot of crime throughout Africa, and it doesn't only apply to Ghana. Travellers are always advised to watch their belongings and keep their belongings by their side. Never leave them in plain sight.

Ghana is exposed to some weather related threats. The country is most exposed to risks from floods and droughts, especially in the Northern Savannah belt. There are also some coastal threats, including coastal erosion as well as landslides, earthquakes and wildfires.

Armed robberies and other types of assault, such as rape and house invasions are increasing but they are still not that common. Tourists should extremely cautious around areas known for expats. These are often the target for muggings and robberies. Always get a taxi to and from bars at night, never walk the streets after dark. African cities in general are not safe for tourists at night.

In March 2016 Ghana’s National Security Council announced that Ghana was taking enhanced security measures due to attacks elsewhere. Keep in mind that these attacks could be indiscriminate, including places visited by foreigners.There have also been terrorist groups in west Africa performing attacks since 2015 in Côte d'Ivoire, Burkina Faso and Mali, targeting beach resorts, hotels and restaurants.

People in Ghana trying to scam you is not a rare occurrence. They usually do it by posing as someone else. Thefts by individuals posing as airport staff frequently occur at Kotoka International Airport. Always keep in mind that legitimate members of airport staff should have identification cards with their name and photograph. If there are no photographs on their cards, they're frauds.There have also been reports of individuals posing as police officers and extorting money from tourists, or incidences of individuals approaching travelers before the main arrivals area claiming to be the traveler's driver or contact. After the tourist enters their car, they extort money from them.

When it comes to women traveling on their own, they are often the target of crimes such as muggings, bag snatching, pickpocketing, etc. These crimes mostly happen in crowded places and beaches, but women should be mostly cautious at night and avoid going anywhere after dark. They are often the targets of sexual assaults or petty thefts. Africa is not particularly safe for women to travel alone.

So... How Safe Is Ghana Really?

Ghana is a relatively stable country, a gem in a region where peace, stability and low crime rates are not very common.

However, there are some issues when it comes to the crime that tourists should be aware of.

Pickpocketing and mugging, even though not as common as in other African countries, exists and you should be vigilant for any dangers or possible incidents.

Avoid walking alone at night, since Ghana is not a safe country for tourists at night.

Foreigners, even during the daytime, are often the target of thefts and muggings.

Watch out for your belongings at all times.

There have been many reports of valuables being stolen on Ghana’s beaches since they are the main hotspot for thefts and pickpocketing.

These crimes also happen in markets, tourist attractions and other crowded places.

Another issue in Ghana is individuals posing for official personnel on airports or train stations and then extorting money from tourists.

There have also been reports of passengers in taxis being robbed by drivers.

You should always look for identification cards with the name and photograph of the individual providing you with their service.

Identification cards without photographs are not valid.

How Does Ghana Compare?