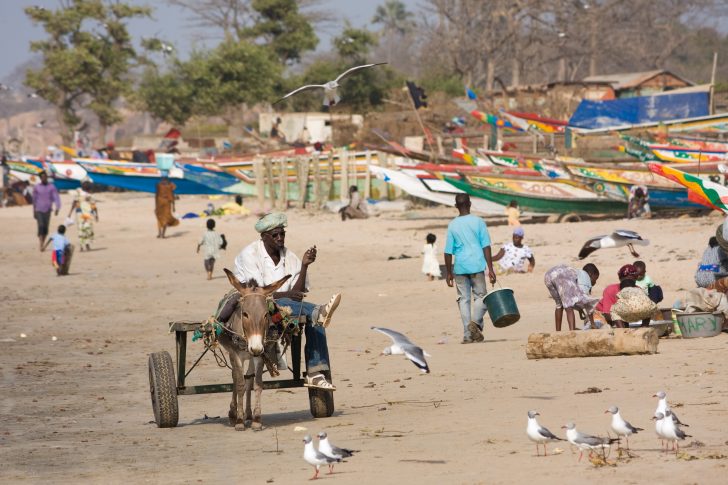 The Gambia is a country located in West Africa and at the same time, it is the smallest country on the continent of Africa.

It has a short North Atlantic Ocean coastline in the west and is surrounded by Senegal so that it is almost an enclave.

The country occupies the navigable length of the Gambia River valley and the hills surrounding it.

Apart from adding the “The” to its own name (it is short for The Republic of Gambia), they also call themselves “The Smiling Coast of Africa”, alluding to their cultural diversity, developed tourism and safety for visitors.

And to be fair, for an African country, The Gambia is mainly safe to travel to and your trip should be trouble-free.

Gambia is, for the most part, a safe country to visit. However it does have a rather high crime rate, though it's mainly ridden with petty street crime. You should be vigilant and take all possible precaution measures in order to minimize the risk of getting stolen from.

Public transportation in Gambia is not particularly reliable but you can always use a shared taxi if there's extra room. Always negotiate every ride before entering the vehicle. Watch out in public transport as it is likely there are thieves roaming around.

There is an extreme threat of petty crime. Pickpockets are an everyday occurrence, so you should be extremely careful when handling your valuables and never carry your money in a purse or a pocket. Never carry all your money in the same place, and be aware of your surroundings at all times. Be wary of young men called "bumsters", since they will offer anything they can in order to get some money from you.

During the year's rainy season (June to October), there has been severe flooding and some winstorms.

Muggings, armed robberies and other types of assault, are on the increase in Gambia, but still not a major threat. Be extremely careful when handling money and around ATMs. These are often the target for muggings and robberies. Always get a taxi to and from bars at night, never walk the streets after dark. African cities in general are not safe for tourists at night.

There haven't been any terrorist attacks recently in Gambia, but they shouldn't be ruled out. Stay away from large gatherings and avoid possible protests. Always follow the instructions of security personnel.

The risk of getting scammed is extreme in Gambia. There is a number of scams performed on tourists, such as getting your passport stolen at the airport by people posing as airport officials, or getting scammed by a bumster - who may trick you into thinking they want to help you, when their only goal is getting some of your money.Another scam exists in which marijuana is offered to tourists only to find police waiting to extort money from you as a bribe.

Gambia is relatively safe for solo women travelers. Just use your common sense and be aware of your surroundings at all times. Avoid wearing purses and do not walk alone or ride in taxis at night.

So... How Safe Is Gambia Really?

Generally speaking, traveling throughout the country Gambia is trouble-free.

However, like anywhere else, travelers should use their common sense, apply the basic precaution measures, and be vigilant of any potential threats to their safety and security.

You are unlikely to encounter violent crime incidents, and the most common threats in The Gambia are a petty street crime such as pickpocketing, bag snatching, and theft.

It is most commonly performed in crowded market areas, public transport, taxis, and isolated beaches.

Unfortunately, tourists are increasingly being targeted by thieves so never leave your luggage or valuables in plain sight.

However, the most irritating issue for tourists in The Gambia are the so-called ‘Bumsters’.

These are young men who rely on scamming tourists instead of finding a real job, so this is basically their profession.

They approach tourists offering help: either romantic, tourist, or social, they will offer basically anything they can do to get some money.

Bumsters often target women, using romance with them, because they are hoping to either gain some money from them or to depart The Gambia through marrying someone from the west.

Keep in mind that LGBT activities are illegal in the Gambia, so watch out for people on the street telling the authorities where your hotel is.

How Does Gambia Compare?