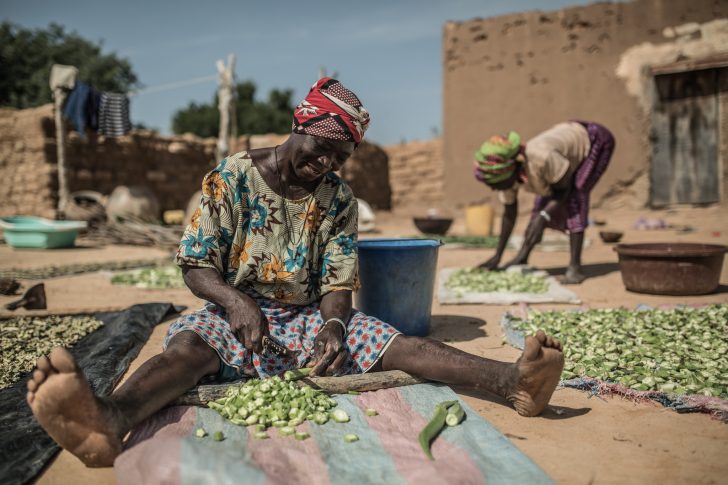 Burkina Faso is a landlocked country located in West Africa, sharing its borders with six countries: Mali to the north, Niger to the east, Benin to the southeast, Togo and Ghana to the south, and Côte d’Ivoire to the southwest.

And although this country is among the poorest in the world, it is also a nation with a strong sense of national pride, with extremely friendly and warm people and visiting it will be a bitter-sweet experience for any traveler.

Until recently, Burkina Faso was one of the safest countries in all of Africa.

However, recently thieves have become more active in major cities, because of the crushing poverty.

And though it has only a minor influx of tourists per year, it still remains an excellent destination for anyone interested in seeing the real West Africa: it’s a country brimming with original African culture and music.

Burkina Faso isn’t exactly known a safe destination, but its safety levels are just like in most African countries. Street crime, bandits and scams are the norm here, so if you’re an adventurer who doesn’t scare easily, do visit but apply all safety measures.

Transport is not safe in Burkina Faso. You can count on highway bandits operating mostly at night but during the day, too. Incidents of highway banditry are on the decline, though, but they still do happen from time to time. If you end up in such a situation, cooperate at all costs, as they have been known to kill and injure people who refuse to meet their demands.

Burkina Faso isn’t exactly known as a safe destination, but its safety levels are just like in most African countries. Pickpockets could happen and we do have some reports of pickpockets but mainly these happen and don't get reported for fear of what might happen from reporting and from lack of faith in the police and what the result of reporting will be.

As for natural disasters, one that keeps hitting this country hard is flooding. In August 2015, 20,000 people were severely endangered and affected by heavy rains that caused severe floods in and around Burkina Faso's capital Ouagadougou. This caused tremendous material damage to more than 3,700 that were left homeless.

Muggings and kidnappings are also common, as are assaults and thefts, particularly in Bobo Dioulasso and the capital, Ouagadougou, the central market and the United Nations traffic circle in Ouagadougou.

Terrorist groups are very likely to try to carry out attacks in Burkina Faso and this also applies to kidnaps. There have been several attacks during the past couple of years, the last one occurring on 2nd March 2018, when there was a terrorist attack against the French Embassy and the Army Headquarters in Ouagadougou. Two more attacks occurred in Ouagadougou, in August 2017, when gunmen attacked the Aziz Istanbul restaurant in Ouagadougou and in January 2016 when there was an attack at a hotel and café in central Ouagadougou.

Financial scams are extremely common in West Africa. There have been reports of criminals seeking details of 'safe' bank accounts overseas in which to transfer large sums of money, and many people fall for this. If you are a victim of this kind of fraud, never travel to Africa to seek restitution as you might end up physically assaulted from the perpetrators. Seek legal advice at once.

Burkina Faso isn't safe for female solo travelers. It is highly advised that women stay out of the streets at night, though this advice applies to anyone, really. If you are a woman and you do plan on visiting Burkina Faso alone, use your common sense and be aware of your surroundings at all times. Avoid wearing purses and do not walk alone or ride in taxis at night

So... How Safe Is Burkina Faso Really?

Street crime is the norm in Burkina Faso as is the case in most African countries, so you should be aware that the streets of this country are full of bandits, scammers, and thieves.

Tourists should be especially careful on the streets as they are perceived as easy targets by local pickpockets and thieves.

Apart from pickpockets, purse snatching, as well as camera snatching, are common occurrences (usually when dangling from your wrists while not being used) so do yourself a favor and leave all valuables at home.

It is also advised that you travel in a larger group as you are less likely to be targeted.

Violent crime is not as bad as you would expect and not as widespread, but assaults and muggings do occur, particularly in Bobo Dioulasso and the capital, Ouagadougou.

Muggings are also common around the central market and the United Nations traffic circle in Ouagadougou. It is especially dangerous after dark, so avoid roaming around, alone or in a group at night.

You should also be aware that thieves are especially active during international meetings or events which attract crowds and people gathering in one place.

Another thing to watch out for is the, albeit declining, number of highway hold-ups by bandits, and similar robberies and attacks occurring on roads and highways of Burkina Faso.

Although they are not as common as they used to be, they still occur sporadically.

Bear in mind that even though they usually operate at night, daytime attacks are not impossible either.

If you do end up in such a situation, keep in mind that these criminals have been known to hurt or kill anyone refusing to cooperate or individuals that attempted to drive through their roadblocks.

How Does Burkina Faso Compare?