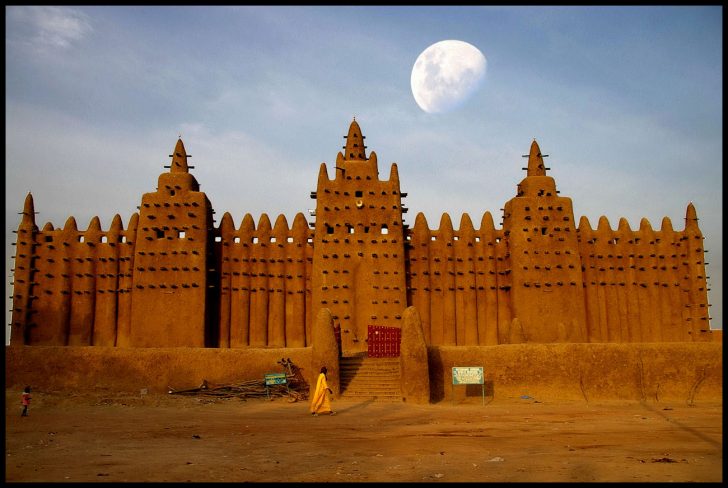 Mali is a landlocked country located in the Sahel, sharing its borders with Algeria, Niger, Burkina Faso, Cote d’Ivoire, Guinea, Senegal, and Mauritania.

Mali is a developing African country and is one of the poorest countries in the world.

That being said, it still has some incredible sights to offer to its visitors, like the historic city of Timbuktu and a couple of UNESCO World Heritage sites.

As for the main sights in Mali, it is sad that both most visited sights are mostly destroyed or forbidden for tourists.

The famous shrines of Timbuktu and the Muhave have been destroyed for the most part by an Islamist group during their occupation in June/July 2012.

There have been talks of these sights being rebuilt, but for now, they still just remain as ruins.

Then there’s the Great Mosque, known for being completely made out of mud, counting five stories and three towers.

But, however impressive it is, you will not be able to see it if you’re not a Muslim, as the entrance to non-Muslims is not allowed.

This came as a consequence of a photo shooting that took place here ten years ago and was viewed as “pornographic”.

Overall, Mali isn't a safe country to visit. With political turmoil and threats of kidnappings and terrorism, you should definitely think twice before deciding to come to Mali.

Transport isn't safe in Mali. Malian roads, as well as vehicles, are unsafe and unreliable, and drivers can be reckless, ignoring traffic signs and there are accompanying factors that make driving difficult like roaming cattle on the roads. The best way to move around Mali is to hire a driver.

As in most African countries, you should be careful with displaying your wealth or your belongings at all, as petty crime is spread in Mali and poverty is crushing. Keep your valuables in your accommodation.

As for natural disasters that hit Mali regularly, they include desert sandstorms in the north, with the harmattan wind blowing during dry seasons, bringing a dust haze which may cause damage to aircraft and respiratory diseases to people. Droughts are also common.

Violent crimes are also common in Mali. People have been attacked in broad daylight, and kidnappings also occur commonly. Avoid walking unaccompanied in Mali altogether, be it during day or night.

Terrorists are very likely to try and carry out attacks in Mali. The risk of terrorist attacks is extremely high in Northern Mali that under the control of Islamist rebels that are cooperating with Al Quaeda. There have been numerous attacks performed in Mali and you should be very careful.

There are plenty of scams and frauds performed in Mali with a goal to steal from tourists. Be wary of anyone trying to distract you, or anyone offering help. Check your change twice and negotiate your rides before stepping into a vehicle.

Mali is not safe for solo female travelers. Anyone is strongly advised against walking unaccompanied in Mali, but this applies more to women as they may be perceived as easier targets by muggers and other criminals. Stay away from poorly lit and deserted areas.

So... How Safe Is Mali Really?

Mali is not a safe country to visit.

You should know that Northern Mali was under the control of Islamist rebels, who practice the extremely strict Sharia law which they use to justify the destruction of shrines, landmarks, and historic buildings.

The Sharia law also calls for women to wear veils, for adulterers to be stoned publicly and for thieves to have their hands cut as a punishment.

This law caused about 500,000 people to flee to other parts of the country or to Niger.

The worst part is that these terrorist groups are in cahoots with an Al Qaeda branch which has operated for many years in the Sahara desert and kidnapped several foreigners from Mali.

Tourists are strongly advised against traveling to Northern Mali or anywhere near the border with Mauritania, and if you do plan on traveling to Mali, you need to monitor events in this country extremely closely and follow the advice of your embassy.

Be wary when on the train commuting between Bamako and Kayes, since it is notorious for theft: if you’re planning on taking the train, you should remain vigilant all the while and keep your valuables tightly by your side.

How Does Mali Compare?