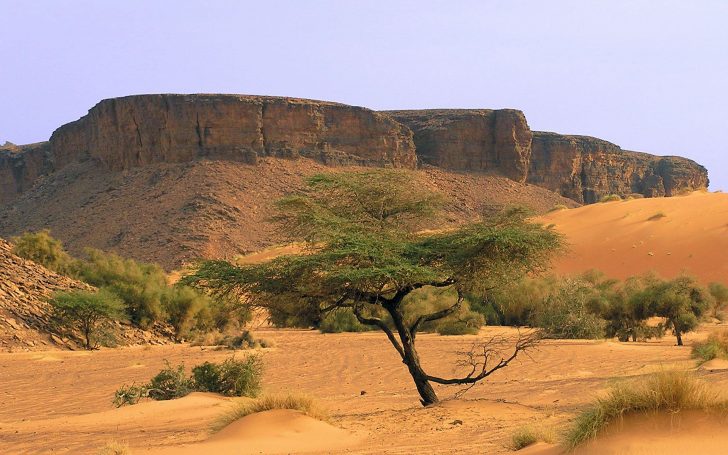 Mauritania is a country located in northwest Africa, sharing its borders with Algeria, Senegal, and Mali, along with the disputed territory of Western Sahara.

Mauritania is a country whose main attractions are its desert and its ocean.

This is why it’s no wonder that tourists mostly come here to visit the desert in Adrar and the Tagant areas (areas around Atar), and the ocean in Banc d’Arguin: this is an incredible sight of a natural reserve with dunes ending in the sea, with millions of birds that will take your breath away.

It is protected by UNESCO.

If you’re interested in seeing the stunning desert scenery, Mauritania is the place for you.

You can hike across rocky terrain and through narrow canyons and run into surprising oases which served as some kind of refuge to traders crossing the Sahara for centuries.

Two other stunning historical cities in the Adrar are Chinguetti, once a trading center with an incredible architecture that persisted unchanged for nearly a millennium, and Oudane, and along with a couple of other small towns, it is also a UNESCO World Heritage Site.

Generally speaking, Mauritania isn’t safe at all for tourists. There have been reports of Westerners being kidnapped and executed while violent crime is on the increase. Exercise maximum possible vigilance.

Use your wits as you would in your own country. For instance, never get in unlicensed cabs as there have been many cases of robbers using this trick to lure and attack their victims. Banditry is increasingly common in Mauritania so be careful when driving or finding yourself on the road. Always keep your windows up and your doors locked.

Pickpockets are extremely common, and tourists very commonly wind up being stolen from. When you’re on the streets, try not to look like you have money and leave all your valuables in your accommodation. Don't take your cell phone out in the middle of the street, and while walking around, keep your eyes and hands on your purse at all times.

When it comes to natural disasters, since 2002, Mauritania has battled many wars with natural disasters from locust invasions to severe drought and flooding. The droughts and severe rainfalls keep interchanging so the country is suffering from either one thing or the other.

Muggings, robberies, kidnappings, and assaults are becoming increasingly common in Mauritania so be on the lookout everywhere. Be careful at night and avoid remote and poorly lit areas, and if you find yourself in a dangerous situation, hand over your belongings immediately.

Terrorists are very likely to try and carry out attacks in Mauritania. Avoid traveling to the eastern and northern provinces of Mauritania - Tiris Zemmour, Adrar, Tagant, and Hodh el Chargui - as there is a continuing high threat from terrorism throughout the country.

As in almost any country, there is a great risk of getting scammed in Mauritania, too. Always check everything twice and negotiate everything in advance. Taxi drivers might try to trick you into paying more, giving you wrongful information about the price of the ride.

Women are strongly advised against going anywhere in Mauritania alone and unaccompanied. If you do decide to go to Mauritania, be extremely careful, especially at night and always try to stick with other individuals or groups. Even going accompanied by just one more person is better than going alone.

So... How Safe Is Mauritania Really?

Though the gorgeous Mauritania, that boasts beautiful deserts and coastline beauty, its safety remains constantly in question with its persistent struggles located with poverty, terrorism, escalating crime rates and severely mined border areas.

Unfortunately, the biggest threat in Mauritania is one of a terrorist attack.

Terrorists have been known to target areas frequented by foreigners, like most of Western Africa, including clubs, restaurants, embassies, international schools, hotels, expatriate housing compounds, churches and other places of worship, and shopping centers, and Mauritania, unfortunately, isn’t an exception.

In early 2011 Mauritanian security forces prevented a car bombing in Nouakchott, while in 2010, three people were injured in an attempted suicide bombing in Nema.

As for crime, you should avoid Nouakchott and Atar, as there’s a great risk of kidnapping particularly against Westerners there.

Violent crime including robbery, rape, and assault is common and represents a great threat in Mauritania.

Avoid beach areas, deserted areas and areas along the road between Mali and Mauritania as bandits have been known to operate there.

How Does Mauritania Compare?