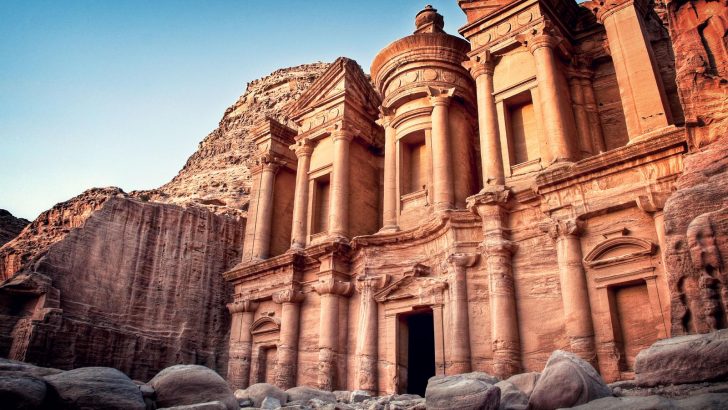 Jordan is a country located in the Middle East that would be landlocked if it weren’t for a small 28km outlet on the Red Sea in the Gulf of Aqaba and a frontage on the Dead Sea.

It shares its borders with Israel and the West Bank (Territory of Undetermined Permanent Status) to the west, with Syria to the north, Iraq to the east and with Saudi Arabia to the south.

Jordan is a country of many beauties and tourists attractions: just think of the Dead Sea attracting many tourists a year, trying to swim in the immense amounts of salt and not succeeding.

Apart from the Dead Sea, that you should definitely visit and float on the densely concentrated salt waves, the biggest reason to visit Jordan is the Archaeological Ruins at Petra: they are a must-see for anyone visiting Jordan.

Petra is a world-known ancient Nabataean city in the south of Jordan.

Due to its sheer size and jaw-dropping ruins, Petra was named a World Heritage Site by UNESCO in 1985.

Overall, Jordan is mostly a safe country. Follow the general rules of precaution and your common sense, and you will probably encounter no problems. There is less crime due to the presence of police and military everywhere and you should just be vigilant for suspicious terrorist activities.

It is advised that you avoid public transport in Jordan due to a high risk of terrorist attacks in crowded places such as bus or train stations, and on public transport as well. Never accept lifts from strangers and always sit on the back seat of a cab.

As mentioned, pickpockets and purse snatching are very common in Jordan, it is actually a constant risk. Cell phone snatching also happens so you should keep all your valuables out of sight. Avoid wearing purses and keep your money in a hidden place, not easily accessible by pickpockets. Also, be wary of people trying to distract you, it might very well be a way to take your money.

As for natural disasters, sand storms can be expected regularly and there is occasional flooding in the deserts, blocking all the roads.

As for muggings, Jordan is relatively safe. There haven't been many reports of someone being violently mugged or kidnapped.

Terrorists are very likely to try and carry out attacks in Jordan. Attacks could be indiscriminate and happen everywhere and target both locals and tourists.

There aren't many scams in Jordan, but you should, just in case, double-check your change, since you might get tricked and negotiate everything in advance to prevent being ripped off,

There are some risks for women traveling to Jordan such as sexual harassment or attacks. Women should avoid areas near bars and clubs, and go by taxi, not on foot. Avoid walking alone in poorly lit and deserted areas.

So... How Safe Is Jordan Really?

Jordan is relatively safe to visit as it is one of the safer countries in the Middle East when it comes to terrorism and crime, but you shouldn’t get too relaxed.

Since there has been an increase in police and military presence with a goal of combating terrorism, the crime rates in Jordan have decreased in Jordan are now actually pretty low in comparison to many European or U.S. destinations.

Generally, the only things to worry about when in Jordan are pickpocketing and bag snatching (which mostly happens in the tourist-frequented part of Amman), and occasionally, sexual harassment or assault if you are a woman, mostly.

Never sit in the front seat of a taxi, as women often report harassment by the taxi drivers.

Watch out for your belongings in the shopping precinct of Amman and especially the up-market Taj Mall, since they attract petty thieves.

However, the highest risk in Jordan isn’t a crime – it’s the terrorism.

Keep in mind that ISIS still calls for followers to carry out attacks on westerners in Jordan, especially at Petra.

Even though the presence of police and military has eradicated terrorist actions in the country since the 2005 suicide bombing of Amman hotels, you should still remain vigilant at all times.

How Does Jordan Compare?