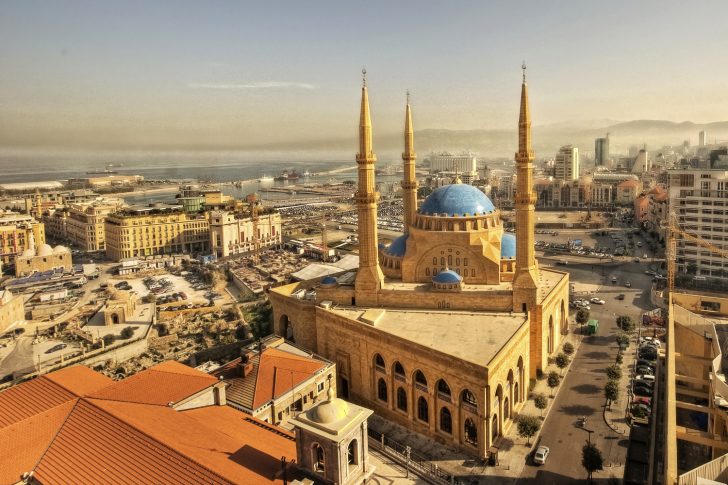 The Republic of Lebanon is a small country located in the Middle East region, counting 3.7 million inhabitants and with Beirut as the capital city.

It boasts a rather long coastline on the eastern shore of the Mediterranean Sea and shares a border with its warring neighbor Syria to the north and the east, and a much shorter border with Israel to the south.

Unfortunately, this country is considered unsafe since its neighbor Syria is in a long war that has left consequences on Lebanon, too.

If you’re planning on traveling to Lebanon, keep in mind that this is a country of immense natural scenery from beautiful beaches to mountains and valleys.

It is one of the few countries where you can go skiing in the morning and then casually stroll to the beach in the afternoon and Lebanese people take pride in that fact, even though this is actually possible only for a few days in the year when winter shifts to spring and/or summer shifts to autumn.

Generally, Lebanon isn't a safe country to visit, because of its complicated political situation and turmoil that took over the country and its neighbors. Be careful when traveling to Lebanon.

When it comes to transport, it isn't too safe. Generally, the roads in Lebanon are in good condition, but the problem is the number of reckless drivers. Also, street names are non-existent so be prepared to a lot of roaming around, and if you plan on mountain driving, keep in mind that it is particularly hazardous. Traffic jams are the norm in Lebanon.

Pickpockets do operate in Lebanon and tourists are commonly the victims of pickpocketing or bag snatching. Be careful in crowded places such as bus and train stations and keep your valuables in your accommodation.

Lebanon is susceptible to many natural disasters, like severe earthquakes which are the most dangerous threat to this country. They are probably associated with a tsunami. Minor natural hazards that hit Lebanon include floods, forest fires, landslides, and drought.

You should definitely be careful when it comes to violent crime in Lebanon. Organized criminal activity exists in the Beqa' Valley and includes drug trade that mostly has nothing to do with tourists, but there have been some kidnappings involving foreigners. Traveling in groups is recommended in this part of the country.

Terrorists are very likely to try to carry out attacks in Lebanon. The threat comes from Islamist extremist groups that are known for targeting the Lebanese state, security services, and civilians, and even foreigners inside Lebanon. Extremist groups have been active within the city of Tripoli, Palestinian refugee camps and in areas close to the Syrian border.

Scams exist in Lebanon and you should use your wits while in this country. Double-check your change, never pay anything upfront and negotiate everything in advance. Be very careful around ATMs and be wary of people trying to distract you.

Lebanon isn't dangerous for women particularly, but it is advised for tourists in general, regardless of their gender, not to roam around unaccompanied by someone who knows the safe and unsafe parts of the country.

So... How Safe Is Lebanon Really?

Lebanon is a country filled with extremely friendly people, but you should know that there is a complicated political situation currently in Lebanon, which makes it unsafe to travel there.

For instance, traveling to eastern, southern, and northern areas which are close to the Syrian and Israeli borders is strongly advised against due to the spillover from the war with Syria and the conflict with Israel.

Also, you are recommended to avoid cities like Hermel, Dannie, and others close to the Syrian or Israeli border.

Lebanon’s capital, Beirut is still reasonably safe as are many other parts of the country, and the chances of something happening to you are small.

You should also be very careful in South Beirut, Baalbek, Sidon, and Beqaa valley, as they have also suffered sporadic clashes and/or had security incidents but these are sporadic events that aren’t too common and usually don’t affect foreigners.

What you should always keep in mind is that it is extremely important that you make sure to avoid any discussions related to politics or religion.

This country is home to a variety of ethnic and religious groups and any comment, and your comments might be taken as an offense even though they may not be malicious.

How Does Lebanon Compare?