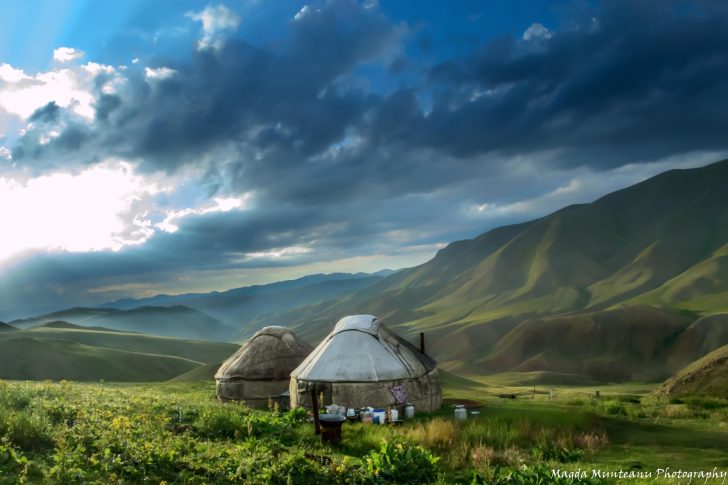 Kyrgyzstan officially referred to as the Kyrgyz Republic is a South-Central Asian Union country that offers great natural beauty with a nation proud of their nomadic traditions.

The area that was to become modern Kyrgyzstan was annexed by Russia in 1876 and after the collapse of the Soviet Union in 1991 it became an independent country.

It is progressive in many ways: its visa policy is the most liberal policy in entire Central Asia and its government prides with its progressive attitude.

There are many things to do and see in Kyrgyzstan.

From the traditional Eastern market in Bishkek that sells virtually everything you might think of, to the famous Dordoi Bazaar, known as the largest market in Central Asia, there is something for everyone here.

If you’re more of a nature lover, you can swim, sail and sunbathe in Issyk Kul the world’s second-biggest high altitude mountain lake, or experience the nomad life in Son Kul, the gorgeous high altitude lake which will make you really experience the semi-nomadic Kyrgyz life.

It can be challenging to travel to Kyrgyzstan as it is a country filled with both petty and violent crime, with corrupt police and no one to turn to. Though it is a beautiful country where crime is on a decline, you should exercise caution at all times.

Public transport is not the safest option for a tourist as this is the prime spot for pickpockets to operate. However, the core network of roads has been rehabilitated and the main roads can now rival many in the western nations. And though they’re starting to deteriorate due to poor maintenance, many of them are being rapidly reconstructed. Be careful and keep your windows up while driving – thefts from cars are also common.

Pickpockets are widespread throughout the country and many tourists can't emphasize this enough. They can be found on every corner, so be extremely vigilant, especially when handling money.

Mugging and kidnapping aren't too common, but they do happen. Be careful around clubs and bars, and when going back home always call a taxi instead of walking. Avoid poorly lit and deserted streets and keep in mind that drink spiking also happens here, so don't accept anything from strangers.

Terrorists aren’t exactly likely to carry out attacks in the Kyrgyz Republic, but you should remain vigilant, as there has been some terrorist activity and armed violence, particularly south and west of Osh.

There are a couple of scams circling around Kyrgyzstan. Many of them involve meeting foreigners right off the bat, at the airport. Taxi drivers often wait outside Manas International Airport and then rip off foreign passengers, many speculating that the airport staff tells them who's a tourist and who's not. There have also been reports of people being greeted by total strangers who happen to know their names. For this reason, always pre-book transportation from the airport with a reputable company or arrange for your accommodation owners to find you one.

It is not safe for women to be traveling to Kyrgyzstan alone. If you do, you should know that women are often targeted when alone on the streets. Avoid remote streets as much as you can, both during day and night. Stay out of the streets at night and be vigilant for any possible dangers at all times.

So... How Safe Is Kyrgyz Republic Really?

Any traveler planning to visit Kyrgyzstan should bear in mind that this country is constantly ridden with strife and political turmoil.

And while several countries advise foreigners to not travel to Kyrgyzstan at all at this time, because of some attacks on Westerners that have occurred, the Kyrgyz people view the situation differently.

Generally speaking, there are fights and assaults here, and they generally occur around nightclubs and bars, just as in any other large city.

Bear in mind that downtown Bishkek can get dangerous after dark.

While we’re at night clubs and bar, don’t forget that drink spiking also occurs in this country so never accept drinks from strangers and don’t let your drink out of your sight.

As for petty crime, tourists often repeat again and again about how widespread pickpockets are in Kyrgyzstan.

Bearing this in mind, just apply all precaution measures you would in any other urban area in the world.

You already know how skillful pickpockets can get and swoop in and swipe your bag clean, so keep your wallets hidden and your valuables at home.

When it comes to more serious forms of crime like rape, assaults, and kidnapping, they have happened and involved tourists in the past.

There have even been incidents with tourists being held up and robbed.

Gang crime is also an issue.

And, don’t be surprised to see uniformed police officer involved in thefts as well.

The main place where muggings tend to occur is in downtown Bishkek, but you should be vigilant around all bars, clubs, hotels, and parks, as foreigners are perceived as easy targets around these spots.

Avoid taking public transport or even walking outside after dark.

When returning from pubs or nightclubs, call a taxi instead of walking home as there have been reports of bands of young men robbing foreigners on their way home.

How Does Kyrgyz Republic Compare?