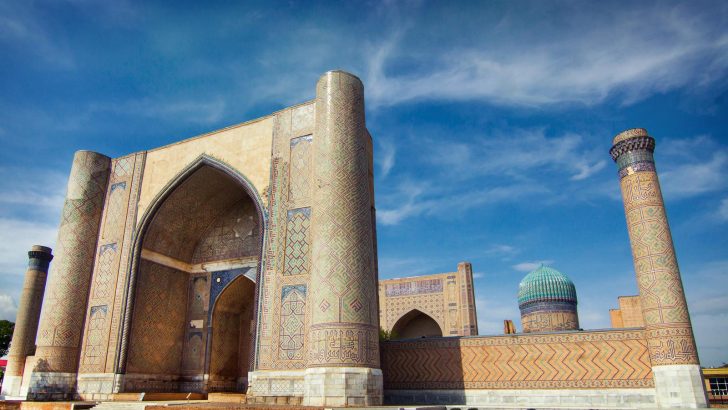 Uzbekistan is located within the South-Central Asian Union and it shares its borders with other member states of Afghanistan, Kazakhstan, Kyrgyzstan, Tajikistan, and Turkmenistan.

Though it doesn’t have a coastline, it includes the southern shoreline of the Aral Sea.

Uzbekistan is a heavenly destination for all those yearnings to spend some quality time with nature and all those thirsty for some cultural uplifting.

This country has preserved a rich architectural heritage, from the monumental buildings that were built as a way of showing prestige, emphasizing the power of the ruling dynasty and leading families.

They are all there still, and the external appearance of the towns as they are today is, to a large extent, determined by those forts.

If you’re more of a nature lover, look no further: the Jeyran Ecological Centre, that was ridden with jeeps and helicopters in the last century and now includes the Uzbekistan jean, one of the species that can be found in the Red Book of Endangered Species, is the only ecological center of its kind in Central Asia.

More than 700 unique animals live here in a fenced area of 5000 hectares.

Apart from this, Uzbekistan is perfect for activities like camel trekking, bird watching, trekking, rafting, and skiing.

Generally, Uzbekistan is safe compared to its neighbors, since it’s a police controlled country. However, you shouldn’t relax as there are violent and petty crimes here and they have been on an increase lately.

Transportation in Uzbekistan is not as smooth as its nickname – the Silk Road – might suggest. The main roads are well maintained but the secondary roads and those outside of major cities function in poor conditions. Add to that vehicles, buses, and taxis running on CNG (Compressed Natural Gas) that just recently caused a major bus explosion with six fatalities as a consequence and you’ll figure out why it is best to avoid public transport.

Pickpockets are, of course, common, and you should refrain from handling money in public, and generally avoid situations where you might get stolen from. Be very careful in public places with crowds or places where tourists gather. You should never carry all your money in the same place, and be aware of your surroundings at all times.

Due to its geographical characteristics, Uzbekistan is very prone to earthquakes, as it is located in a seismically active zone. The eastern portion of the country, where the cities of Tashkent, Samarkand, and Bukhara, as well as the Fergana Valley, are located, is constantly at risk of earthquakes of very high intensity. The last severe earthquake struck Tashkent in 1966, causing severe material damage, killing hundreds and leaving 300 000 people homeless.

Mugging and kidnapping are not unheard of in Uzbekistan, though it’s not an issue to be worried about. It exists, but it’s not too common. When in any of the major cities, be careful after dark, avoid unlighted and deserted areas, and don't walk unaccompanied.

Even though there haven't been any terrorist attacks in Uzbekistan’s recent history, they shouldn't be ruled out so remain vigilant and aware of your surroundings at all times.

There are a couple of known scams in Uzbekistan, the most popular one being the situation where a stranger comes up to a tourist and says they found some money lying on the street. Then after a short conversation, when the tourist has put up some of their money too – thanks to the scammer’s skills, the scammer will try and get the tourist to split the cash with him. It’s an obvious scam, but people still fall for it. Also, avoid locals offering to show you “nightlife in Uzbekistan” as this can end in many unfortunate scenarios.

Generally, it is not recommended for women to be walking alone along the streets of Uzbekistan’s major cities, but it’s not that dangerous either. Just apply all precaution measures you would in your own city. Be sure to avoid remote streets, both during day and night, and do not flash your belongings or handle money in public. Stay out of the streets at night and be vigilant for any possible dangers at all times.

So... How Safe Is Uzbekistan Really?

The areas of Uzbekistan along its borders (which are aplenty since it is a landlocked country) are not safe.

They may be land-mined, there have been cases of borer gunfire, and you can also expect closure without notice there, so never ever roam around, especially not around places that aren’t authorized border crossing points.

When it comes to crime and violence, Uzbekistan is different from its neighbors: it is generally safe for tourists, which is maybe due to the fact that it is police controlled state.

However, it isn’t a safety paradise and you shouldn’t relax since this country isn’t without its risks.

The street and violent crime have been on an increase lately, especially in Tashkent.

According to the Uzbek law, homosexuality is illegal and any kind of public display of affection is still very much frowned upon socially.

Be careful if you’re a member of the LGBT community.

Apart from this, you should keep in mind that any form of photography can upset the authorities, and you’ll be easily spotted taking pictures in this country as it’s a police controlled state.

Photography is forbidden at metro stations.

How Does Uzbekistan Compare?