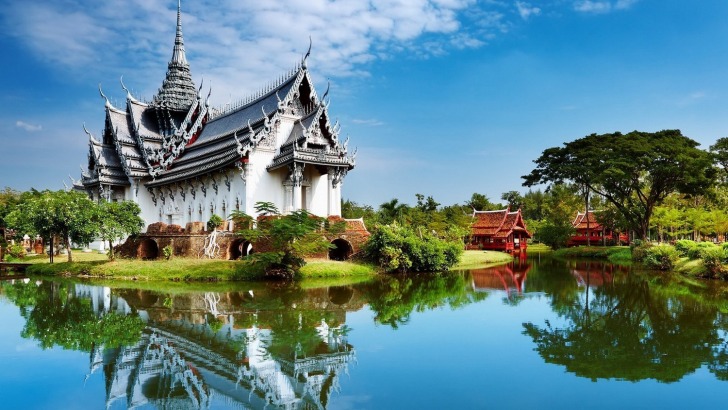 Chiang Mai is the center of Northern Thailand and the Capital City of the Province of Chiang Mai.

Chiang Mai, though the fifth largest city in Thailand, boasts such natural treasures and tranquility that it’s mostly visited by tourists who just want to get away from the hustle and bustle of a large city.

This isn’t to say that it’s completely secluded – no: it’s surrounded by countryside and mountains, but it also has a genuine city center and is you’re completely in touch with the civilization.

This city is a prime example of what Thailand is: it has resisted the heavy flows of tourists, and kept its innate Thai identity, keeping its rich culture, religions, and history safe.

Generally speaking, Chiang Mai is a safe city, though there are some scammers and petty thieves. You better apply all possible precautious measures, just in case you stumble upon them.

There is a great risk when it comes to transportation conditions in Chiang Mai. Thailand roads are the place where many motorbike accidents happen, especially in the mountainous areas of Chiang Mai. These places have completely new traffic rules for tourists, that they are not used to, which makes it difficult to be a part of the transportation system. Avoid public transport too, as this is where the pickpockets operate.

Since Thailand is a growingly popular tourist destination, Chiang Mai is also more visited than it used to be, and it's actually to be expected that pickpockets operate around the city, usually in crowded places filled with foreigners. Excessive vigilance is highly recommended.

As for natural disasters, Chaing Mai is known for flooding and severe rainy seasons.

Kidnappings are not that often, though they have been reported. Muggings are also rare, but they're also possible, especially in the remote areas and the outskirts of the city.

Though there haven't been any recent terrorist attacks in Chiang Mai, Thailand’s main cities have been assessed as a medium-threat location for terrorist activity

There are two known scams in Chiang Mai: the gem scam, where they convince you to buy worthless gems for a lot of money; and the tuk-tuk scam, where a tuk-tuk driver tells you a tourist attraction you want to see is closed, and instead offers you a tour for - again - a lot of money, which usually consist of touring the gift shops.

Even though Chiang Mai could generally be considered a safe city for women, they are still highly advised to follow the basic rules of precaution. Avoid dark alleys, walking alone along with dark, poorly lit or deserted areas, or finding yourself late at night in areas filled with bars or clubs as you might receive some unwanted attention.

So... How Safe Is Chiang Mai Really?

Now, it wouldn’t be fair to say that Chiang Mai has no dangers at all – it certainly does, but for a city in this part of the world, they’re mostly insignificant.

Chiang Mai is perfectly safe and its dangers come down to petty crime and scams.

Again, one of the most important things here is not to mess with the Royal Family – in any sense: you should never, under any circumstances, say or mumble anything negative, or make jokes about the Thai royal family, as you might get attacked – and, we mean – severely.

And of course, given the fact that this area is already sort of secluded, by all means, avoid poorly lit, deserted areas, especially at night – Thailand is safe, but don’t push your luck.

How Does Chiang Mai Compare?