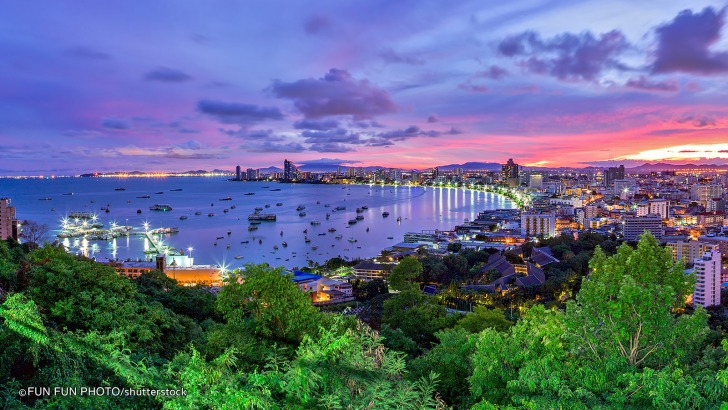 Pattaya is a city notorious for its booming sex industry and sex tourism is, actually, the main means of money earning in Pattaya.

However, even though it’s most famous for its go-go and beer bars, the local authorities in its city are trying to provide more family-friendly attractions and activities.

The beaches in this area are, unfortunately, below Thai standards for beaches, but authorities have been trying to improve their quality – destroying, along the way, some of the natural charms this area once had

Generally speaking, Pattaya is relatively a safe city, though there are some scammers and petty thieves, especially along the beaches. You better apply all possible precautious measures, just in case you stumble upon them.

One of the greatest risks in Pattaya lies in its transportation system and reckless drivers. The number one cause of death for visitors to Pattaya is motorbike accidents that often occur on the narrow, mountainous and twisty roads and the speedboats that cause many accidents in the water. Avoid public transport too, as this is where the pickpockets operate.

Pickpockets can be usually spotted along the beaches that are filled with foreigners, where excessive vigilance is highly recommended. You'll see pickpockets and petty thieves in all crowded places so are very careful.

As for natural disasters, Pattaya is known for its devastating flooding and occasional tsunamis.

Kidnappings are not often and neither are muggings, though they're possible, especially in the remote areas of the city and other secluded areas outside of it.

Thailand has been a target of small bomb attacks and shootings, but places like Pattaya aren't probable targets since they're secluded and mostly consist of beach resorts.

Be prepared that most people providing any type of service for tourists in Pattaya are probably going to try to scam you or rip you off. Tuk-tuk drivers, fake police officers, street vendors are all possible scammers. Keep in mind that ATMs are places where criminals try and steal pin codes.

Even though Pattaya could generally be considered a safe city for women, they are still highly advised to follow the basic rules of precaution. Apart from that, use your common sense and apply all basic precaution measures.

So... How Safe Is Pattaya Really?

Pattaya is mostly safe for foreigners and tourists.

Probably the most severe, danger in Pattaya, and the number one cause of death for visitors to this city is motorbike accidents, that often occur here.

There has also been an accident recently involving a speedboat propeller that hit a surfacing driver and killed him on the spot.

Be careful on the roads too, even if you’re going on foot (and be equally careful both on and off pedestrian zones, because Thai drivers have been known to completely ignore them and just drive along with them, regardless of the people walking there).

How Does Pattaya Compare?