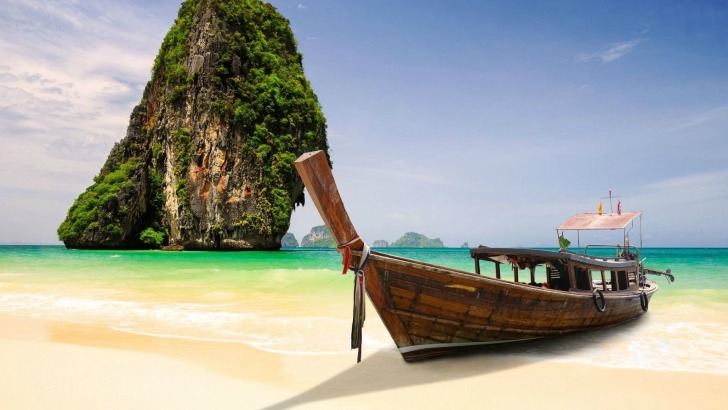 Krabi often referred to as Krabi Town, is the capital of Krabi Province in Thailand, known for its gorgeous beaches and luxury resorts.

However, though the province is known for its beaches, Krabi Town doesn’t have any.

It is a small city of about 55,000 residents and most tourists don’t stick around, they just move towards the popular beach resorts of the province.

Still, the place is considered Thailand’s “nook”: it is a relaxed place which is pleasant enough for travelers to spend a night – and it’s a place where you can certainly experience the true and traditional Thailand.

Generally speaking, Krabi is a safe city, though there are some scammers and petty thieves. You better apply all possible precautious measures, just in case you stumble upon them.

There is a great risk when it comes to transportation conditions in all of Thailand, not just in Krabi. The number one cause of death for visitors to Thailand is motorbike accidents that often occur on the narrow, mountainous and twisty roads. Avoid public transport too, as this is where the pickpockets operate.

Krabi isn't as visited as all the other cities in Thailand so, apart from the beaches in the rest of the Krabi province, there is no reason to be afraid of the pickpockets in this city. They are usually on the beaches filled with foreigners, where excessive vigilance is highly recommended.

As for natural disasters, Krabi is known for tsunamis, severe storms, and occasional earthquakes.

Kidnappings are not often and neither are muggings, though they're possible, especially in the remote areas of the city and other secluded areas outside of it.

Thailand has been a target of small bomb attacks and shootings, but places like Krabi aren't possible targets since they're secluded and mostly consist of beach resorts.

Be prepared that most people providing any type of service for tourists in Krabi are probably going to try to scam you or rip you off. Tuk-tuk drivers, fake police officers, street vendors are all possible scammers. Keep in mind that ATMs are places where criminals try and steal pin codes.

Even though Krabi could generally be considered a safe city for women, they are still highly advised to follow the basic rules of precaution. Apart from that, use your common sense and apply all basic precaution measures.

So... How Safe Is Krabi Really?

Many consider Krabi to be the least risky place in the whole country.

However, that doesn’t mean that it doesn’t have its dangers: petty theft like pickpocketing or bag snatching is more than common and you should expect it at every step.

Violent crime has been on the rise during the past couple of years and muggings and robberies are not rare at all, but most don’t affect tourists.

Avoid any confrontations during the night, at bars and clubs as you might get severely beaten up.

Still, these warnings are just for hypothetical situations, since you probably won’t get in any kind of trouble in Krabi: except for stealing and petty crimes on the beaches and mainly after dark, there aren’t many criminal activities in this part of Thailand.

Another danger, though, that you shouldn’t forget is the driving in Thailand which is very dangerous for tourists: the number one cause of death for visitors to Thailand is motorbike accidents, which often occur on the narrow, mountainous and twisty roads.

How Does Krabi Compare?