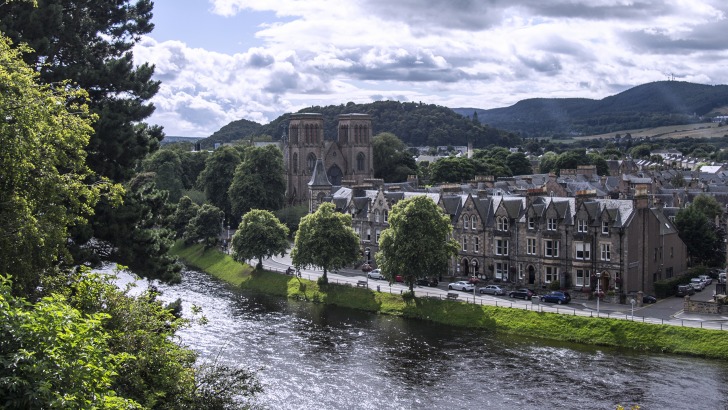 Inverness is a city situated right at the heart of the Scottish Highlands and it represents Scotland’s principal center for administration and commerce.

It’s surrounded by easily accessible countryside and if you are interested in sailing, climbing, hillwalking, whale-watching or anything of that kind it is impossible to beat in the UK.

It has a very strong music and dance scene, larger than any city of equivalent size in the UK.

For this and all other reasons, it is expensive for housing and accommodation, similar to Edinburgh and Aberdeen, and it’s flooded with tourists during summer.

Inverness is overall, very safe and you will probably encounter no problems when traveling there. Still, do not let your guard down and be vigilant at all times.

Transportation is very safe and reliable in Inverness, but be careful since most bus services cease or become less frequent at about 7 pm.

Since Inverness is a popular tourist destination, it is expected that pickpockets operate in prominent and touristy spots. Still, it's not a common form of crime.

There are almost no threats of natural disasters in Inverness, apart from common raining and cloudy weather.

Although there are areas that should be avoided at night, Inverness is relatively safe when it comes to mugging or kidnapping, though precaution is still advised.

There is no risk of getting scammed in Inverness, but still be careful when receiving change, check it twice, negotiate everything in advance and be wary of people offering you unwanted help, directions, etc.

Even though Inverness is pretty safe for women traveling solo, sexually motivated assaults are on the rise in Dublin and it is advised that unaccompanied women take extra precaution measures, especially after dark.

So... How Safe Is Inverness Really?

Overall, Inverness is a safe city and you will probably have no problems while being here when it comes to safety.

The most common nuisance here are the drunk people that you’ll probably encounter on a Friday or a Saturday night, but they’re mostly annoying and nothing else.

Another nuisance for tourists is the risk of pickpockets, so you should be very careful when visiting important city landmarks and tourist areas, or crowded places such as airports, train or bus stations, and public transportation.

These are some of the risks tourists might encounter, but apart from petty crime and drunk people, there are no reasons to be worried – just use your common sense and things will go smoothly.

How Does Inverness Compare?