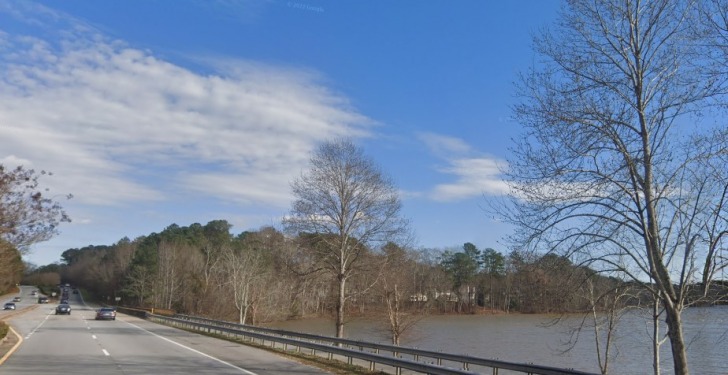 This is the state’s first master-planned community and golf carts play a big part in it.

More than 11,000 people own golf carts in Peachtree City and there is a labyrinth of trails throughout to get you anywhere you need to go.

There are even golf cart parking spaces.

You can drive if you want to, as there are regular roads, but why not live like the locals do while you’re there?

There are just six hotels in Peachtree City and they are spread throughout the city.

There’s definitely a line drawn between locals and visitors in some respects.

Of the three lakes in the city, only one is open to tourists unless you are a guest of a local at the other two.

As a master-planned community, there are five villages spread out in Peachtree City:

Many cities and streets here have Scottish names after a half-Scottish Indian Chief who first settled this land (unfortunately, he was also killed by his tribesmen).

There’s a tribute to the military here at Airbase Georgia, where several planes and many war artifacts are on display.

There are several not-to-scale battleships in the museum and you can even sign up for a Warbird Ride on a World War II plane (for $1000 – $2000).

Peachtree City is one of many “Peachtree” names in the Peach State, so you can’t abbreviate it by calling it Peachtree.

It’s always referred to as Peachtree City or the cool kids call it PTC.

It sits about 35 minutes south of Atlanta, but it definitely feels like a whole world away.

There's a low overall risk in Peachtree City. Crime rates are low. The community is middle to upper-class with an average income of $100,000 and people choose this area because of its safety.

There isn't a transit service in town, but just outside the city limits you can grab a Marta bus (Take Marta, it's Smarta, as the saying goes.) There are taxis available in town and carpool options. There's low risk with any option.

There's a low risk here with just two purse snatching reported in 2020. Keep an eye on your purse or backpack when riding on a golf course so it doesn't fall off.

There is a risk of severe thunderstorms and tornadoes throughout the year, with the most active season in spring. This area doesn't get a lot of winter weather, but even a little bit of snow can send the Atlanta area into chaos. It's just not equipped to handle the rare snow or ice storm. There's a medium risk because storms can be dangerous or deadly here, so you need to be prepared.

There were just four robberies here in 2020 and one of them was in public, so it's safe to say there's a low risk in Peachtree City.

There's a low risk in Peachtree City. Atlanta does have a higher risk, but if you're not leaving PTC, you shouldn't have to worry about the risk.

There's not a lot of fraud here, but the typical residential home scams are present. You won't need to worry about that. There's a low risk you'll get scammed.

Women have no worries there and there's a low risk. The city is safe, quiet, and walkable.

There's no risk in the water. The latest consumer confidence report shows the water meets or exceeds state and EPA standards.

Airbase Georgia is a family-friendly event with warplanes from WWII, artifacts, and clothing of the era, and replicas of important battleships in the US war efforts.

Be sure to look up while you’re there, as some of the planes are hanging from the ceiling.

Warbird rides are available, but as I said earlier, they are expensive.

You must book those rides at least five days in advance.

The Southern Hollywood Film Tour starts in Peachtree City and takes two hours to ride through some of the most popular films shot in this area.

Georgia is known as the “Hollywood of the South”, so this is not a tourist trap attraction.

The Flat Creek Nature Area is an easy trail that is 3.5 miles long through trees and creeks.

There are several viewing platforms to take in nature’s wonders and enjoy a moment of peace and quiet.

The trees canopy this trail, but you’ll need bug spray to keep the mosquitos at bay.

Line Creek Nature Area is a smaller wildlife wonderland with a pond for fishing.

Line Creek is right near The Avenue, which is a shopping and dining destination in town.

The open-air mall has a great Instagram-worthy photo op, but I’ll let you find that for yourself as you explore.

Places to Avoid in Peachtree City

Crunching the data on the crime maps, you’ll find the highest crime areas are along the entire west side of town.

However, overall crime is really low, so you don’t need to worry that any of the west side areas are dangerous.

This area is safe.

In the rest of this section, I want to explain less about what to avoid and more about things you should know.

I told you earlier, PTC has five villages.

They are pretty much similar in every way.

The village design wasn’t to give unique aspects to different parts of the community.

It was so there would be five self-sustaining communities, making it easy for residents to get groceries, and supplies, and attend gatherings.

The design was to keep residents from having to drive across town to go to the market, not to make a visitor experience unique.

While the villages aren’t cookie-cutter designed and are worth exploring, it’s not like the different parts of Disney World with themes.

The city is very resident-oriented.

There are some firm lines between what visitors can and can’t do.

For example, Peachtree Lake is owned by the city but only residents can swim there.

You can’t bring a gas-powered boat onto the water.

Lake McIntosh is only available to residents of the county.

Lake Kedron is the one lake open to the public.

There are three golf courses in Peachtree City, but they all require membership.

This is a rather affluent city, and while people are nice, they might not be as open to visitors as in places like Savannah, which makes a lot of money off tourism.

So... How Safe Is Peachtree City Really?

Crime is like peachtrees in Peachtree City – very hard to find.

There’s a one in 2390 chance of being a victim of a violent crime.

It’s a fraction of the state and national levels.

That leaves a one in 169 chance of being a victim of theft.

Here’s what really shocked me – the car theft rate.

I’ve looked at hundreds of cities and I can generally guess what the car theft numbers are going to be based on the other factors in the community.

I about fell out of my chair when I saw Peachtree City had just 10 stolen cars in 2020.

I know a lot of people drive golf carts here, but even at the high-end estimate of 11,000 golf carts, that’s still 27,000 people potentially driving a car.

(Now don’t you dare think this means I am saying you can leave your car unlocked, running, with the windows down and your priceless jewels in the front seat.

Crime does happen everywhere, but it happens much less in Peachtree City.

How Does Peachtree City Compare?