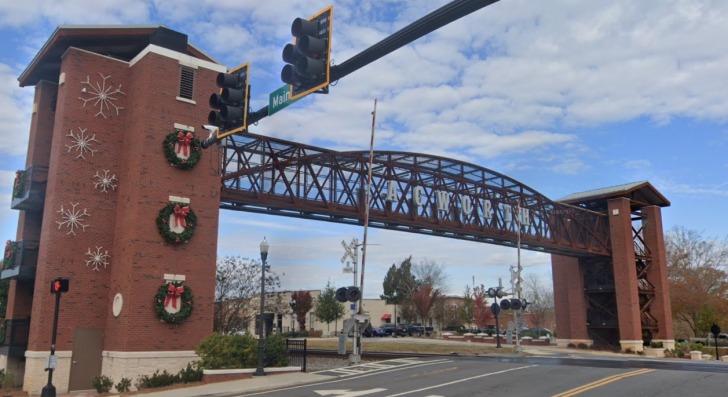 Get ready for lake life in a visit to Acworth, Georgia.

This city sits on the outskirts of the Atlanta metro area, but more importantly – it sits on a beautiful lake that slices through the center of the city.

That means shoreline for everyone.

What’s great about this city is that the lake is open to tourists as well as locals.

The downtown area is rich with history and harmony, blending old facades of buildings into modern restaurants and shopping.

You can even do a walking tour of all the history in town to burn off the calories of Mama Helen’s Fried Chicken at L. Marie’s Southern Cuisine.

Acworth is a small town with just 22,000 people and the majority of the city boundaries are residential.

The whole west side of Acworth is filled with neighborhoods with large lots and several farms.

The activities to do here are limited to the downtown area and the lake.

It’s not much, but it’s a lot – and if that doesn’t make sense, it will by the time you are done reading this.

If you are looking for hotels here, there are 11 hotels all located along I-75.

You won’t find hotels deeper into the city.

There's a low overall risk. The city crime numbers are low, and I even had to go back a few years to clarify some oddities in the 2020 pandemic numbers. It's not immune to crime, but it's among the safer places to visit in the area.

There isn't a bus system that goes around Acworth, but you can hop on the Xpress bus system to get around the Atlanta area. Xpress will also take you to a MARTA stop. You can get a taxi or rideshare. The downtown area is very walkable, and the lake area is just three miles from the hotel groupings. You won't have much of a reason to go to the west side of the city where the residential areas are unless you are visiting a friend. A car would be nice here, but a rideshare or taxi can help keep costs down since there are limited numbers of places to go here.

No pickpockets were reported in 2020. The theft rate in 2020 plummeted and was not consistent with the past several years, so I looked at previous years to be sure I was giving you good information. There have been no pickpockets or purse snatching going back to 2018. There's a low risk during your visit.

You're going to have a risk of severe weather in the form of thunderstorms and tornadoes. This whole area is in part of what is known as "Dixie Alley", a tornado-prone region during the spring and late fall. However, these storms can happen any time of year. There's a medium risk because the storms can get dangerous, but the good news is there is plenty of warning that storms are coming.

I could scare you a bit and say a third of all robberies here happen in public. The truth is, there were just three robberies in 2020 and only one was in public. This city hasn't seen a year with more than eight robberies since at least 2010. There's a low risk of being mugged.

Since this is part of the greater Atlanta area, it automatically gets a medium risk. It's not because of anything in Acworth, just that the large metro area is always going to be a sweet spot for those nasty terrorists.

There's a lot of residential here so the scams are all focused on residents. As a tourist, you shouldn't have any risk of being scammed.

Women will love visiting here with the shopping and outdoor activities as well as the low crime rate. There were two rapes reported in 2020, which is two too many, but it's much lower than the national average or surrounding cities.

The tap water has a low risk in Acworth and meets all required standards with no violations. I do want to address a situation that happened in 2019 at Lake Acworth. I'm a dog lover with two beautiful golden retrievers who love water, so this story hits close to home. In 2019, a woman took her dog to the lake on a hot day. They swam and enjoyed the adventure. On the way home, the dog got sick and by the time they got to the emergency vet, the dog was brain dead and passed away shortly after. It was because of an algae bloom in Lake Acworth. Be sure to check the water quality reports in the lake before you go swimming. It was a freak accident, but the algae reports are critical to knowing how safe water is for you and your family.

Safest Places to Visit in Acworth

The downtown area should be the starting point to get a lay of the land and a bite to eat.

Unfortunately, the map provided by the tourism website is incredibly hard to read the names of the streets that outline the open container district.

As long as you are on Main Street, you’re safe.

It also runs up Logan Street to Logan Farm Park.

Be sure to go on the historic walking tour of the city.

Ask about The Great Locomotive Chase that was headquartered in Acworth during the civil war.

I won’t spoil the story, but it begins with a highjacked train called “The General” with a man who loved burning things down behind the controls.

A picture at the Cowan Historic Mill is sure to get you some likes on Instagram.

To get educated about the history of African American heritage in Acworth, visit Doyal Hill Park.

Now let’s go to the beach, and no – we aren’t heading to the Georgia coast.

There’s a beach right in Acworth.

Actually, there are four beaches in Acworth.

You can also do some boating here, but it can’t be a motorized boat.

This is a great spot for some paddleboarding too.

Proctor Landing and South Shore Park are the two other beaches in town.

All parks have picnic areas and grilling stations.

This small town is becoming a foodie destination.

Henry’s Louisiana Grill was ranked as one of the best 100 restaurants for a big night out.

You can get authentic southern food and fresh seafood at several places in town.

There are many options for all price points.

Just remember – the tea is going to be “sweet tea” and taste like you’re drinking a bag of sugar.

If you don’t want sweet tea, you need to specify that and then get an odd look from the wait staff.

If you’re there during October, the Folklore Haunted House is the premiere “scared yourself silly” destination in the Atlanta area.

You can even get “RIP” tickets to avoid the long wait in lines.

Places to Avoid in Acworth

The highest crime rates are along the Southside of I-75.

The rates are pretty evenly spread out in Acworth, so it’s not like there’s a good part and a bad part.

All places are safe anyway, due to the low crime rates.

Most of the parks and water access points are open from sunrise to sunset, so avoid trying to sneak in after the sun goes down.

Not only does the risk of danger increase in the dark, but you could get busted by the police and explain why you’re swimming in the dark in a closed park.

For an extra word of caution, there have been reports of coyotes in this area and they hunt after dark.

If you haven’t been to the South of America before, you should know there are some pretty thick accents here.

Phrases like “y’all” and “darlin'” are used a lot.

There is even a restaurant called “All That Ale’s Ya”.

It might take a little adjusting if you are used to a faster pace of life as well because Southerners speak slower than their Northern (aka – Yankee) counterparts.

Avoid asking people to say a word again because you think their accent sounds funny.

Enjoy the conversation and the unique slice of Southern life.

I once spent dinner with a friend and her extended family and when an elderly woman asked me where I was from, I told her St. Louis.

She nodded and said, “I thought I heard some Yankee in your voice.”

Safety Tips for Traveling to Acworth

So... How Safe Is Acworth Really?

It’s a sleepy suburb on one side of the lake and a downtown that is fun but not wild.

You can feel safe bringing your family here.

There have only been three homicides in Acworth (I should’ve said this earlier, but Acworth is pronounced “Ack-worth”) since at least 2010.

The city gets less than 8 robberies per year dating back just as far.

The average theft take was $11 in 2020, even though the theft rate is the only crime segment higher than the national average.

More than half of the reported violent crimes happened in homes.

Your chances of becoming a victim of a crime in Acworth are as follows:

This is just the safety rating of one small city in a large area with dozens of cities.

The safety reality can change from city to city here, especially the closer you get to Atlanta.

We’ve reviewed every city around the Atlanta metro area to help find the perfect spot for a visit or to give you important info about where you’ll be traveling.

How Does Acworth Compare?