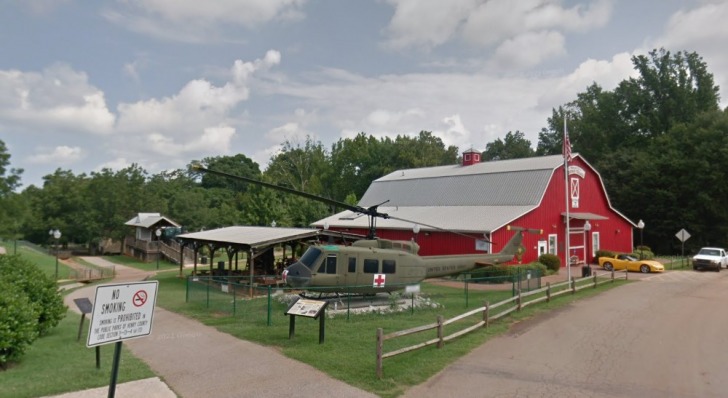 A Hop on the I-75 Express Lane to McDonough, Georgia, a suburban community with some farm lifestyle near the big city of Atlanta.

This is a quaint city with a historic downtown preserved to near perfection and a few ghost stories to go along with it.

Smokey & the Bandit fans might recognize some of the sights too.

This is the seat of Henry County and home to just under 30,000 people and a very diverse community with 64% of the residents being African American, 12% Hispanic, and 19% Caucasian.

You’ll find hotels along the interstate, but none deep inside the city limits.

It is worth exploring the town because you might come across NBA great Shaquille O’Neill.

He has an estate here.

McDonough (pronounced “Mick-Donna”) is nearing a perfect city with enough of a mix of popular restaurants and stores and locally owned and operated options.

There’s history to cherish and the future to look forward to with festivals just about every month.

It even feels so familiar, you’ll see lions and tigers and bears, no lie!

There's a low overall risk of visiting here, but a few crime hot spots to talk about. The benefits far outweigh the risks, as there's just so much to do here. It's no Georgia Aquarium, but for a small town, it's ripe with options.

You can take the Xpress bus to Downtown Atlanta. Taxi and rideshare options are available. If you are renting a car or driving your own, you can get toll passes to take express lanes to and from Atlanta. The lanes change the flow of traffic depending on the time of day or the need for traffic assistance in either direction. These are optional lanes. You can also just take the normal lanes on I-75 and sit in more traffic. Any option is a safe one here.

There were four purse snatching in McDonough in 2020. That number is higher than some of the most dangerous communities I've covered, but it's still a low risk. The average theft was just under $400, a reminder to not carry valuables in your purse and always keep them secured.

You face the risk of thunderstorms, some severe, and tornadoes in just about every part of Georgia. There's a medium risk because the storms do happen each year, it's just a matter of where they will hit next. There is the occasional winter storm here, which normally aren't severe, but Southerners don't handle winter weather well, so it's best to avoid any kind of snow or ice when visiting.

Only four robberies happened in public places in 2020, so there's a low risk.

McDonough is almost an hour south of Atlanta, so you shouldn't have to worry about a terrorism risk. Atlanta has a higher risk because of the large population, but McDonough is a low-risk area and not a hard target itself.

In March of 2022, two fast-food workers were busted taking credit card numbers of customers and buying things at other stores with that information. It happened over a two-day span. Other scams are mostly focused on locals, like utility and jury duty scams. You've got a low risk of getting scammed here, but I can't really give any advice on how to avoid fast-food scams unless you just pay with cash.

Women face a low risk here. There are a lot of safe activities to do and most of them are in the daytime. Even being a small town with a low crime rate, it's still best not to wander around a strange town after dark.

Safest Places to Visit in McDonough

Most, if not all, shops and restaurants in the historic district of downtown are locally owned and operated, so you can search for unique treasures and try a new place for lunch every day.

The Geranium Festival is held here every year in May.

At night, you can go on a Haunted History Tour in the fall.

Be sure to make reservations for that, as spots fill up fast.

Noah’s Ark Animal Sanctuary is just 10 miles south on I-75, but worth the drive.

If you’ve ever seen the movie “We Bought a Zoo”, it is kinda like that.

Admission is free but donations are welcomed as it costs $33,000 a month to feed and care for the animals.

It has all the animals you’d expect to see on a farm but also houses tigers, bears, wolves, primates, alpacas, and so much more.

Southern Belle Farm is one of the most popular places in town when it’s open seasonally.

In the spring, you can pick your own peaches, strawberries, blueberries, and blackberries.

There are also wildflower fields to run through that will make a great Instagram story.

In fall, pumpkins and fresh-baked goods come out for the crowds.

The Christmas season at the farm is pretty incredible too.

There is also a U-Pick-Em farm at Narrow Way Farm, but this is an organic farm without all the pomp and circumstance of Southern Belle Farm.

For rainy days, check out Dave & Busters for great food and games, or try an escape room in the middle of a camera museum.

There’s great nightlife with live music at Southern Roots Eatery & Tavern and the kids can burn off some energy at Woody’s Jump & Play.

Places to Avoid in McDonough

Most crime in the city is right along I-75, especially on the east side in the middle of the city.

That’s pretty common with just about all cities I’ve researched.

There aren’t any bad neighborhoods or dangerous parts of town to avoid, but with a lot of residential areas, it’s pretty clear where the tourists should go and where the neighborhoods are.

The average home here is worth less than $200,000, so you won’t be able to drive around looking at regal historic homes like you can, for example, in the Historic Brookhaven area of Atlanta.

However, Shaq’s house is on a public street and doesn’t have a gate, though you can’t see much of it from the road.

Safety Tips for Traveling to McDonough

So... How Safe Is McDonough Really?

This quaint and charming city has a little bit of grit to it.

The biggest concerning number I saw was a theft rate that averages a one in 53 chance of being a victim.

I dug into that number a little bit more for you to get a better understanding of what is being stolen.

There were 88 violent crimes and half of those happened in a private home, leaving your risk of being the victim of violent crime at one in 675.

19 of the violent crimes did happen against strangers, so it’s not unheard of to have a tourist be a victim.

The city recently launch a camera program, where businesses and homeowners are asked if they want to register their security cameras with the city.

That way if a crime happens near the camera, it can be used as evidence and help track down the suspect.

This is really a rather safe, diverse, unique city to visit.

Aside from being forced to stay in hotels only located along the interstate, it’s really a great place to spend a few days and if you get bored, Atlanta is just 30 minutes away.

How Does McDonough Compare?