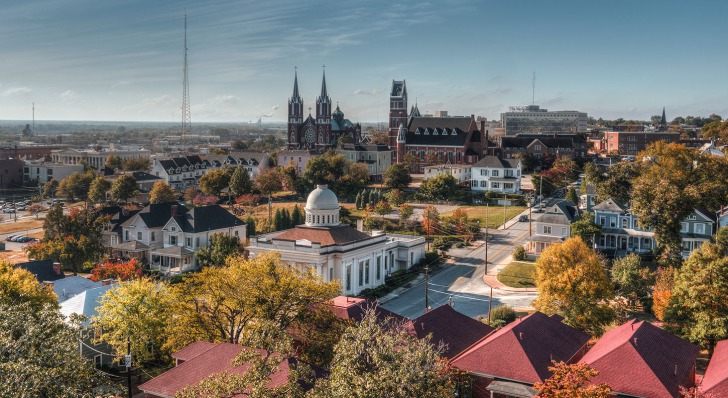 Macon, Georgia, is known as the Heart of Georgia.

That’s quite an honor, given how many wonderful cities with Southern charm are in the state.

Technically, this area has been known as Macon-Bibb County since 2014, but people still call it Macon.

The only difference to note is that law enforcement and local government come from a consolidated city/county system instead of those being separate entities.

Macon might be a destination itself for you, or it might be a pit stop on a road trip to Florida or the Georgia/Carolina coast.

I have stopped in Macon twice before on road trips, preferring this city to Valdosta, but that’s just a personal interest decision.

Each one is a great place to stop for the night.

If you’re staying longer, you should pace yourself.

While there are things to see and do, it’s not a place where you’re not going to be able to see everything.

At the heart of Southern hospitality, it’s encouraged to take your time, walk slowly, talk slowly, and enjoy every sip of your sweet tea.

The slower pace here might be a much-needed break from work.

This is a city that could have an Allman Brothers record as a soundtrack, and there’s a museum that bears their name.

Atlanta is just an hour away, and the closest beach is less than three hours away.

So, whether you want to do a little bit of everything or a whole lot of nothing, Macon and the surrounding area offer it all.

Macon is a city on the line between low and medium risk. The violent crime rate is more than twice the national average, yet other crimes that would concern a tourist - like theft - are near the average, albeit slightly higher. We'll stick with a medium risk but explain more details as we talk through this.

Macon-Bibb County Transit Authority is in charge of the public bus system here. Buses go east of I-475 but not west of it. That does cover the bulk of Macon, as the west side is just more of rural Bibb County. Taxis and rideshares are available, as are rental cars, but they are definitely not as plentiful as in places like Atlanta.

There aren't large enough crowds here to have anything but a low risk. You really have to not be paying attention to get pickpocketed in Macon. I stopped by a dog park here when traveling with my two pups, and I made sure to bring my purse with me. You don't want your car to get pickpocketed, either.

Macon gets a mix of severe weather throughout the year with tornado potential. Flooding from the Ocmulgee River is a concern too. Hurricanes that move inland can also cause tropical storm-force winds here and drop large amounts of rain. Winter weather is rare, but if/when it does happen, it can cripple the streets.

The robbery risk is just over the national average, but with the rate of aggravated assaults, you should treat it as a medium risk. If a robbery turns into an attack, it becomes an aggravated assault and is recorded as such.

There's a low risk here with a small town surrounded by rural areas not being something a terrorist would lose sleep over.

Since Macon isn't a tourist destination, the scams that happen here are against residents. They are traditional spoofing or fake police office scams.

A lot of people drive along the I-75 corridor here, so it's tempting to stay at one of the hotels just off the freeway. I'd suggest staying downtown in a safer area. I've stayed at two hotels along I-75 just because I needed to get on and off the road quickly without distractions. At one hotel, a UHaul was stolen, and another one had five homeless people in the parking lot offering to wash windows. As a single woman, it was just a little unnerving. I would unload ALL the stuff from my car to keep it from being taken while I slept. On a positive note, the sexual assault rate here is below the national average.

The 2022 Water Quality Report from the Macon Water Authority shows full compliance and no violations. You should only be worried about water quality if flooding happens before or during your visit.

Safest Places to Visit in Macon

Maconga.org is the official tourism website for the region.

The Allman Brothers Band Museum at the Big House is the place that honors all things Allman.

This city is where the band came from all different cities and started making their way up the Billboard charts.

The museum is full of mementos and artifacts, with a gift shop to pick up souvenirs.

The Museum of Arts and Sciences has several permanent exhibits but also brings in traveling exhibits throughout the year.

You can explore space or go back to pre-historic days.

Explore fine art or look at the finer aspects of the Milky Way.

This is where you can see the only Earth Lodge known on the North American continent.

There are also incredible views of the Macon skyline from this vantage point on top of the mounds.

The Tubman Museum celebrates the artistic creations of African Americans from different eras.

It’s a cultural gold mine, and you won’t find another one this big across the South.

If you like this experience, ask about the distance learning program to stay in touch and keep expanding your knowledge of African American culture and art.

For the architectural style of the historically rich and famous, check out Hay House.

The 18,000-square-foot mansion is as intimidating as it is stunning.

When you go on the tour, don’t forget to look up.

The exquisite details cover everything from the floor to the ceiling.

While Macon has plenty of great restaurants, you simply must try H&H Soul Food, which has been nationally recognized for its amazing comfort food.

This type of restaurant is called a “Meat & Three,” which means you can order your choice of meat (try the fried chicken) and three sides.

These are very popular types of restaurants across the South.

Places to Avoid in Macon

South Macon has a higher number of crimes, and there’s a real concern that crime rates are causing a racial divide.

Dr. Riku Kawaguchi, a sociology and criminal justice professor at Mercer University, spoke to local television station WGXA and explained it like this, “According to research, there is more so an outmigration of white residents from these areas with high levels of crime.

Some of the crime issues might be reinforcing the residual racial segregation we have in the community.”

He added, “These neighborhoods are more likely to see people moving out, and that’s mostly because when you have a high amount of crime.

The result is that not only is South Macon not as safe as North Macon, but businesses will decide to move up north or not open in the neighborhood, leading to a risk of more blight and fewer reasons to visit in the first place.

This allows criminals to run rampant while police try to police the whole county.

The central part of the city is actually one of the safer parts of town if you look at crime distribution maps, but the neighborhoods just outside there have higher crime rates.

This is a city where you should stay near attractions and busy entertainment areas and not just wander the streets looking for something to do.

Safety Tips for Traveling to Macon

So... How Safe Is Macon Really?

Violent crime was following a nationwide trend of exponential increase with the ongoing gang, drug, and illegal gun issues.

The Bibb County Sheriff’s Office has been running a series of stings and crime crackdowns, like the Four Corners initiative that ran from May through September.

“This operation touched on all facets and all parts of Macon-Bibb,” Sheriff David Davis told Macon television station WMAZ.

It assures visitors that there is an engaged law enforcement presence dedicated to improving the safety of a community.

Deputies also meet with business owners every few weeks to discuss ongoing challenges or new crimes, like the donation bins being robbed at a local non-profit.

While all that is good to know, there’s still an underbelly of crime here.

Looking at just statistics of the number of homicides versus the population, Macon has one of the higher homicide rates in the nation.

However, it’s not a series of random shootings causing the problems.

Most murders are between people who know each other and had some kind of disagreement that escalated at the spur of the moment.

The main thing for a tourist to know is that Macon isn’t this sweet, safe, Southern belle of a city.

It does have those elements, but you can’t let your guard down.

Stay out of the neighborhoods and stick to the main roads and attractions.

How Does Macon Compare?