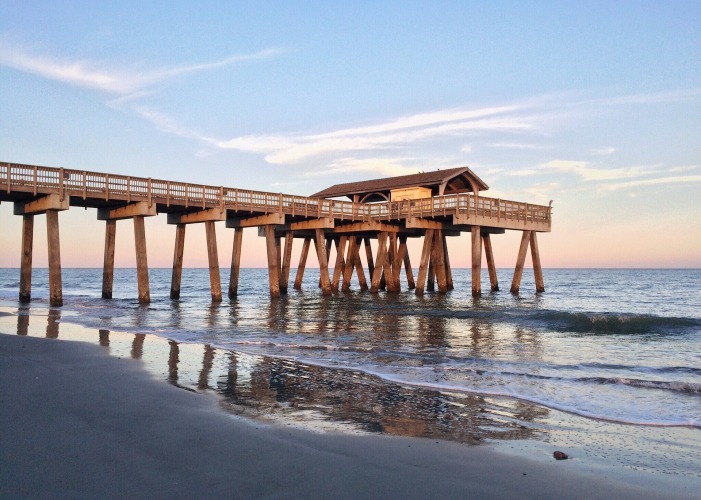 Tybee Island is a barrier island off the coast of Georgia.

It’s the easternmost point of Georgia and is surrounded on three sides by sunny, sandy beaches.

It’s just 30 minutes from the city of Savannah, making this a great day trip for those who live or visit that city, but it’s also a vacation destination in its own right.

You might hear some locals refer to this as Savannah Island, but the name is officially Tybee Island.

This small island holds a lot of excitement, from lighthouse tours to Fort Pulaski to nightclubs to dining and shopping.

There’s a Marine Sanctuary and Marine Science Center if you want to see sea life without going in the water.

You don’t want to miss one of the fresh seafood dinners caught and served in the same area.

Tybee Island is a safe, affordable getaway that is close to land but feels like a tropical world away from normal life.

The low overall risk is thanks to an attentive police department, a small landmass, and locals who want to preserve the charm of the community for years to come. The biggest risk in June - November is hurricanes, which could quickly shut down this tiny island.

There's low risk when taking the public transportation options here. You either want to bring a car to get to the island and then park it while using the variety of bike and shuttle services on the island, or you can rideshare from Savannah.

Only 6 larcenies were reported in 2020, giving it a staggeringly low risk. Yeah, that number seemed low to me too, so I double-checked and then dug into some 2021 numbers posted by Tybee Island Police. Thefts are just very low here.

Hurricanes are a big concern during the season, which again is June - November. There's a medium risk of a hurricane hitting or impacting Tybee Island. You'll get plenty of notice if a storm is brewing, they don't just pop up overnight. The island can get severe thunderstorms and lightning is always a concern in an outdoor community. Follow the rules "Go indoors when thunder roars" and you'll be just fine.

There's a low risk here too. Digging through the crime data, I saw a couple of thefts from motor vehicles, so allow me the common reminder of "Don't let personal belongings or valuables in plain sight in your car when heading to an attraction or the beach."

There's a low risk of terrorists going after one of the safest islands I've ever researched. There is, however, a nuclear bomb in the waters off Tybee Island. More on that later in this article.

There's a medium risk of falling victim to a rental scam. This is a popular trend with crooks in destination beach locations. They'll find pictures of a home and offer that home for rent at a discounted price. A tourist gets all excited about the "great deal" and hands over the money ahead of time to reserve the rental. The tourist arrives on Tybee Island to find it was a scam and they lost their money. Don't wire money ahead of time ever for a vacation rental. If a deal seems too good to be true, it is. Contact a local rental company in Tybee Island that has a legit business license to get a safe rental experience.

There's a low risk for women here in general, but if you are going to be drinking, have a buddy with you. Don't take a drink you didn't see poured. Don't walk around drunk. There were several arrested for public drunkenness on those crime reports.

There's a low risk when drinking or using tap water as it meets or exceeds all safety standards from a state and federal level. Tropical storms and hurricanes can cause water quality issues and there will be water warnings if that happens.

There are two big tourist attractions based on the history of Tybee Island.

Fort Pulaski is a 6-mile ride from the Island and has Civil War history in its masonry walls.

I’ve visited plenty of forts along beaches in my travels and I have to say they are downright stunning to see in person.

The Tybee Island Light Station and Museum is a popular and safe spot to visit.

If you aren’t terrified of heights, you can go up to the top of the lighthouse.

Allow me a brief story.

I am terrified of heights but I love lighthouses, so I went up to the Tybee Island lighthouse.

I was too scared to walk out on the balcony and was trying to build up the courage.

A 10-year-old boy was just as scared as I was, but his parents were encouraging him to go out.

He didn’t want to admit he was scared, so I said “Tell them you’re staying with the scared lady inside the lighthouse because you are a nice guy.”

It worked and he got ice cream for being so nice to me.

The view from the top of the lighthouse is stunning and you can see ships for miles off the coast.

Beachside, there are fishing activities and the big draw is hunting for Megaladon Shark teeth.

These massive sharks have been extinct for two million years but their teeth still wash up on the Tybee Island beaches.

You can also book one of the many sea excursion options available on Tybee Island.

When you shop on Tybee Island it’s all locally owned and operated, so you’re giving right back to the local community.

There are also several art galleries on the island.

All that touring gives you an appetite and Tybee Island mixes the best of Southern cuisine with seafood recipes.

Places to Avoid in Tybee Island

If I was writing this in the 1600s or 1700s, I could tell you about all the dangers of pirates and pillaging on the island.

I could warn you of soldiers searching for enemies ready to battle if this was during the Revolutionary War or Civil War.

However, I’m writing this in the 2020s and there are very few places to avoid.

The pirates are long gone.

You do need to avoid the sandbar at the south end of the island at all costs.

During low tide, it looks so inviting.

If you haven’t lived in an area with tides, you should know the tides can rise fast and swiftly.

More than 50 people are rescued each year by ignoring this advice on the Southend Sandbar.

It’s a life-threatening situation for you, your family, and others who might be gullible enough to follow you out.

The same advice goes for the smaller, yet more dangerous, North Beach sandbar.

Those big ships that pass offshore stir up water surges that hit this sandbar.

One surge and you can be swept off your feet and carried out into the channel.

There are no lifeguards at this beach.

So... How Safe Is Tybee Island Really?

The real dangers are in the water.

That sandbar warning is real and can be deadly.

Rental scams are the biggest concern for people who are looking to stay on the island.

You need to make sure your landlord is licensed and if something seems like too good of a deal it probably is.

How Does Tybee Island Compare?