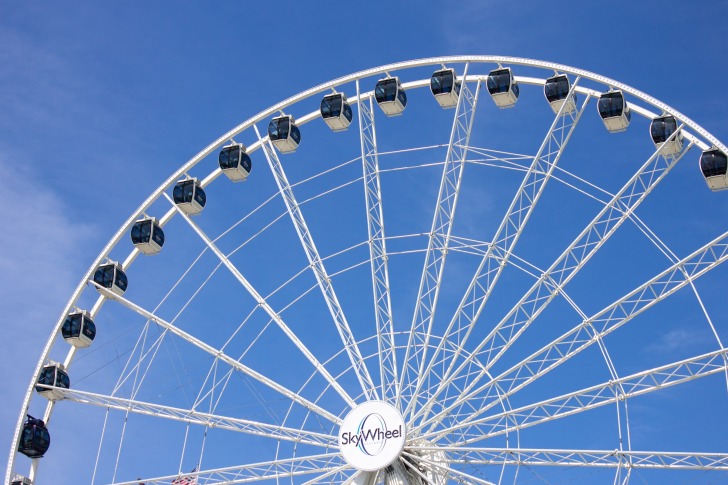 Myrtle Beach, South Carolina, is located along what’s called the “Grand Strand” of beach along the coast.

The beaches, world-class golfing, and southern charm make it a destination city for more than 19 million annual visitors.

This is a little more raucous of a beach vacation than just sitting back and soaking in the rays.

This is an entertainment mecca.

There are amusement parks, one of the largest water parks on the East Coast, and plenty of theaters and nightclubs.

This is also one of the top Spring Break destinations as determined by USA Today.

It’s important to know the geography of this area.

The Grand Strand is a 60-mile section of beach that includes Myrtle Beach.

There is also nearby North Myrtle Beach, which is a whole different city.

Most of the information provided here is going to focus on Myrtle Beach city proper, not the Grand Strand and its compilation of cities, but we’ll touch on a few of those areas.

Myrtle Beach is ranked as one of the top 3 most dangerous cities in America based on FBI crime reporting numbers.

Keep in mind those numbers are based on the population of the city of Myrtle Beach, which is just under 35,000, versus the number of crimes.

The numbers look different when we add in the massive number of tourists.

There's a medium overall risk in this area. It's more of a party than other beach communities. There are higher crime rates than you'd expect in a tourism corridor. The area spends six months of the year in hurricane season.

There's a medium risk when taking taxis and public transportation, mostly because of the sheer amount of traffic this city can have during busy times. The frustration can build easily. There are main roads and then lesser-known shortcuts throughout the area. If you are going to be driving in this area, it's advised to learn the streets and shortcuts ahead of time. You should also make sure any taxi, pedicab, bus, or rideshare you use has a visible permit from the city of Myrtle Beach.

When you look at just the crime numbers, there's a high risk of getting pickpocketed. The FBI 2019 statistics show there's almost a one in 10 chance of being victims of a larceny/theft. That is an incredibly high number. When you add in the tourism numbers, that average is more than cut in half. Still a high number, but a little more comforting.

During hurricane season, which is June - November, there is a high risk of natural disasters in the form of hurricanes. It's not that so many hurricanes hit this area, it's that when they do hit they can cause large amounts of damage. If a hurricane is churning anywhere near Myrtle Beach during your planned trip, stay away. The wind damage and storm surge are dangerous and costly. Other times of the year, there's a low risk.

The violent crime rate is 1,190 per 100,000 and the robbery rate is 281 per 100,000. This is a medium mugging risk in our view, especially since those theft numbers are so high. A simple theft could easily escalate to a violent crime, especially in an area where there's a lot of alcohol and partying.

There's a low terrorism risk here. There are no hard targets nearby, and it's a large stretch of land for terrorist attacks if it happens. There are far greater things to worry about when visiting Myrtle Beach, South Carolina.

There's a medium risk of a scam here. Residents face the greatest risk of the run-of-the-mill scams that pop up nationwide, but a tourist should be aware of scams like "My car is out of gas and I need to get home." Don't give out any personal information or flash cash around where a would-be scammer could take advantage.

Women face a medium risk here. It's a party town and with that comes inherent dangers for women. One positive note—several bars in the area will post a sign with a type of alcohol shot. If a woman goes to the bar and asks for that shot, she will be escorted to her car by a security guard and removed from a potentially dangerous situation. So it's a great comfort for women to know that while the risk is higher, there are also opportunities from locals to keep them safe. Also, don't wander around at night alone. That comes from the advice of many social forums.

There's a low risk when drinking or bathing in tap water in Myrtle Beach. The city has no violations and meets or exceeds state and national requirements.

There is just so much to do in Myrtle Beach, it can easily get overwhelming to decide your day-to-day activities.

Plan them out well.

You’ll also want to plan daytime and nighttime activities, as there are a plethora of options at any time of day.

Know that some of the places that are more chill during the day can get rowdy at night.

For the safest and family-friendliest time, head up to North Myrtle Beach.

That’s one of the lowest crime cities in the nation and just 15 miles away.

The Family Kingdom Amusement Park is a great way to be near the beach breeze while still getting a theme park experience.

Ripley’s Aquarium of Myrtle Beach is another great family adventure.

There are 90 golf courses nearby as well.

The Myrtle Beach SkyWheel is a Ferris wheel inches from the beach with terrific views at the top.

There are several safe shopping areas along the shoreline as well, from souvenir stands to outlet malls and everything in between.

There are three water parks along the Grand Strand on top of all that.

The Garden City Pier (aka Party Pier) comes to life with karaoke and live performances.

There’s a House of Blues as well, with big-name entertainment that comes to town.

Barefoot Landing and Broadway at the Beach both offer great nightlife experiences but are also listed as two of the best romantic getaway locations in Myrtle Beach.

The Dead Dog Saloon is one of the top draws.

During the day you can have a meal waterside, but at night it turns into a big beach party.

Places to Avoid in Myrtle Beach

You want to avoid walking anywhere alone at night.

With such high crime rates and large crowds, don’t put yourself into a potentially bad situation.

If you want to see the water at night, stay on the boardwalk and avoid the beach.

The boardwalk is patrolled by police while the beach is not.

You want to stay in the foot traffic of the tourist sections of town, again, especially at night.

Myrtle Beach has increased in population by more than 30% since 2010, and that means the city is always growing and expanding, so a neighborhood today that might not be too safe could be a huge tourist development by the time you get there.

It’s also worth noting that Myrtle Beach Police have an aggressive plan to crack down on crime.

So... How Safe Is Myrtle Beach Really?

I asked one of my friends who spent years in this fine city.

Her response was “Downtown Myrtle Beach has more of a party scene, and therefore a bit more crime, but I still feel safe walking around and going to bars there.”

The crime statistics are scary.

There is a lot of theft here and all major crime categories are higher than the national average.

Those numbers are just based on the resident count, not taking into consideration the millions of tourists who come each year.

You’ll need to keep your wits about you here, as there are many ways to lose focus on safety from drinking too much, leaving items at the beach while you take a swim, or taking out money in large wads of cash when paying for bills.

It’s also easy to talk to strangers and share details of your life as it’s such a friendly community, but that could put you at risk of being a victim of a scam.

If you use basic common sense and simple safety techniques like keeping your purse or wallet close to you, not wearing valuable jewelry and staying sober enough to make good choices, you don’t have an imminent threat in Myrtle Beach, South Carolina.

How Does Myrtle Beach Compare?