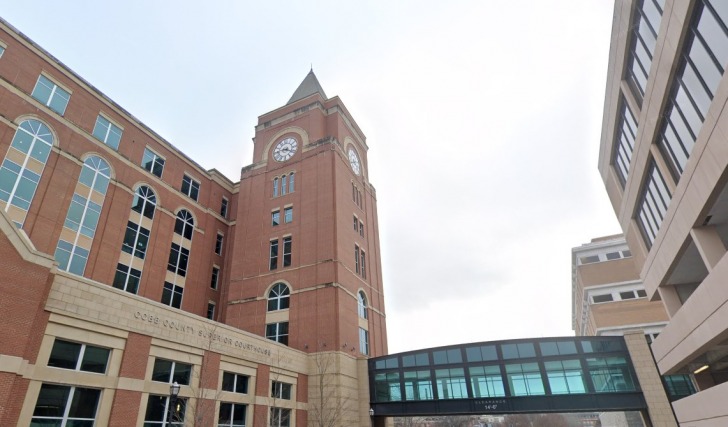 Where else can you sit on a rocking chair on a historic front porch repeating “Frankly, my dear, I don’t give a damn,” and people will repeatedly laugh than in Marietta, Georgia?

This city is so infused with history, that it takes several historical districts and the “Gone with the Wind” museum just to scratch the surface.

Marietta Square downtown has six museums and 30 restaurants in one easily walkable area.

There are ghost tours and food tours and even a giant chicken that bears more explaining as we go along.

Marietta is about 15 minutes from downtown Atlanta, and just a short drive to the Atlanta Braves ballpark just outside the southern perimeter of the town.

Outdoorsy people will love Marietta too for the nearby mountain and the massive water park to cool off on those humid summer days.

You can fish and golf on the same day and enjoy a big barbecue dinner at night without driving for more than *15 minutes to each attraction.

Nearby Kennesaw Mountain is more than an outdoor playground.

It’s a former Civil War Battlefield where a lot of blood was shed and there are monuments of the Battle of Kennesaw Mountain throughout the park.

You might even see a re-enactment of a battle while you’re there.

The bulk of hotels in Marietta are going to be at or south of Marietta Parkway.

The biggest gathering is near the interstate’s crossing with Delk Road.

There’s one hotel, the Hilton, in Marietta Square and this is a great option if you want to be able to walk around near your hotel.

There's a low overall risk, although there are some pockets of crime we should talk through. Some of the communities in this area are very safe, yet very boring. Marietta has a lot to do and a little more crime to show for it.

MARTA doesn't go to Marietta (that's the popular Atlanta travel system), but you can get rides through CobbLinc. That's the public transportation system throughout Cobb County. You can also get a bus ride on Xpress GA to travel throughout the region. There's no specific bus system just for Marietta, so you can rely on taxis or rideshares. You will need car rides here because, while the independent historic areas are walkable, none of the big attractions or neighborhoods are within walking distance of each other. It's a low risk no matter how you travel, but many people have told me "You need a car in Marietta."

There were 13 pickpockets or purse snatchings in 2020. That's higher than most surrounding cities, but still just a one in 4690 chance it will happen to you. That's a pretty low risk. What always surprises me about the pickpocket crime numbers is that theft is much more inconvenient for the victim than it is beneficial for the thief. In this case, the average take by a thief was $30. You are now spending hours getting credit cards canceled, and freaking out about a driver's license needed to get through the airport, and the thief has $30. To me, it's just another reinforcement to put as little as needed in my purse when I travel and always wear a crossbody bag, so it is not easy to just grab and run.

You have a medium risk here with tornadoes being the biggest threat. Severe thunderstorms can limit outdoor activities and cause flash flooding on the roads. The positive part of this is the National Weather Service gives plenty of heads-up information about storm potential and incoming storms.

10% of the robberies in Marietta in 2020 happened in public. With a total of 67 robberies, I thought that number might be a little low due to the pandemic, so I checked the previous two years and that is about average and not an anomaly. Even the percentage that happened in public was the same, so there's a low risk of it happening to you.

There's a medium risk as Marietta is very close to the perimeter of the Atlanta area. The large population and potential distribution disruption make Atlanta a hard target. Marietta might have a bit of appeal to a terror group since Dobbins Air Force Base is on the south side of town.

There's a low risk of a tourist getting scammed here. Even the city just reports scams that directly impact people who have utility accounts in the city of Marietta. My best advice is to avoid looking for discount baseball tickets or show venue tickets on places like Craiglist. Too many scammers are there looking to rip you off. Buy from the venue where your purchase is guaranteed and protected from fraud.

The crime rates here are that of an average city, with theft rates being a little bit higher. If a woman is independent and can hold her own, traveling through different areas and enjoying dinner and drinks without overdoing it, there's a low risk that anything will happen. Avoid walking around at night by yourself.

The water in Marietta is deemed safe by the state and EPA. The annual water quality reports for each city have to be posted by June 1, so you can read the newest report when it comes out to make sure that risk is still applicable.

Safest Places to Visit in Marietta

Let’s start on the west side of town in the hills of the Kennesaw Mountain National Battlefield Park.

Make sure you bring a fully charged mobile device because there are a lot of places to take pictures here.

There are seven historic locations to visit here and some breathtaking views from overlooks along the way.

Stop by the visitor center to enjoy a film laying the groundwork for your visit.

In Marietta Square, you have six museums to visit:

Take a tour while you’re there too.

The lantern-led “Ghost of Marietta” tour is sure to bring some otherworldly sights.

It’s a trolley tour, so you won’t have to walk.

There are tours of local breweries too.

The Black Heritage Walking Tour is a great way to learn about the history of African Americans in this region.

If you’re visiting between May and October, there’s Six Flags White Water Park.

This is just the water park, not an entire Six Flags amusement park.

The other half of the park is in Austell and you can buy tickets that get you into both venues.

A popular tourist spot for food is the Marietta Diner, open 24/7, which won’t break the budget either.

There’s a variety of food options from American to Greek to Italian and good old comfort foods like fried chicken and mashed potatoes.

This isn’t where you’ll find the “Big Chicken”, however.

The big chicken is really just the sign for a Kentucky Fried Franchise, but it stands 56 feet tall and when it was once at risk of being torn down due to storm damage, residents had their feathers ruffled and fought back.

The chicken still stands and there’s a gift shop inside to get your own big chicken souvenir.

Places to Avoid in Marietta

The southern edge of the city and the area along I-75 have the highest crime rates.

That’s not a surprise as that includes the busiest areas of the city and the interstate, which has a lot of traffic coming off and on the roadway.

You’ll find out the bad part of Marietta by sight.

There are some rundown houses and abandoned buildings in certain areas around the central part of the city.

If you end up on one of those streets, just turn around.

Southern cities tend to have neighborhoods that mix blight with beauty, usually by accident.

I lived in Memphis and one street could have a row of small “shotgun” houses (that’s a house so long and narrow a shotgun bullet could go right through it) and mansions around the next corner.

If you can, avoid driving between 6:30 am and 9 am so you don’t get stuck in morning rush hour.

You’re going to spend a lot of time sitting in a car if you don’t plan around those traffic spikes during the day.

Avoid trying to take any flowers, artifacts, or novelties that aren’t for sale during the various tours and park visits in the region.

I promise, if you take flowers from the garden outside the Gone with the Wind Museum, they definitely will give a damn.

Safety Tips for Traveling to Marietta

So... How Safe Is Marietta Really?

Most crimes are just slightly above the national or state average, but not enough to make it a dangerous city.

The chances of being a victim of a crime are as follows:

The theft rate is a little concerning, but the context of those numbers is what really matters.

20% of them were from shoplifting, which isn’t a threat against a tourist.

Taking shoplifting out brings the risk to one in 53. 38% of thefts were from cars.

If you don’t have a car or practice excellent car safety, your risk goes down substantially.

The city generally has fewer than 5 homicides a year looking back over the past decade, and the highest number in one year was seven homicides.

49% of the violent crimes in 2020 happened in private homes.

14% of violent crimes were against strangers.

It really helps to do this deep dive into the numbers, because you’re not really worried about how safe it is to live there, you just want to be able to travel safely.

If you take away numbers that don’t impact tourists, most cities become at least slightly safer, if not a whole different story.

How Does Marietta Compare?