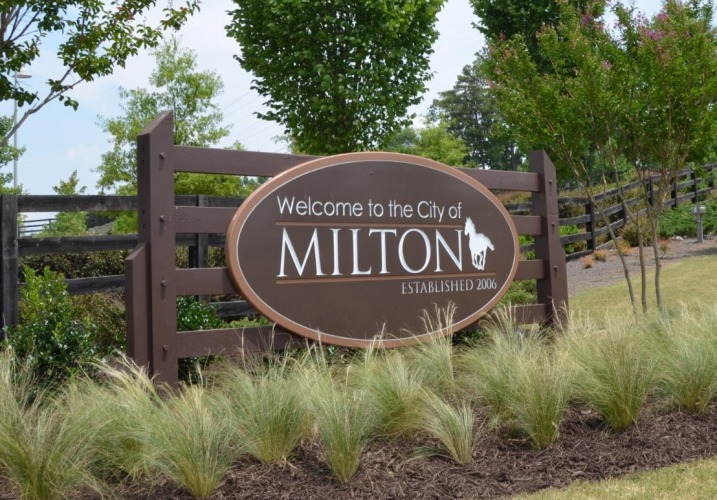 The “neighs” have it in Milton, Georgia – a community of wide-open spaces, equestrian life, and safe adventures.

How can a city be in the same county as the massive Atlanta metro area and be so different is fascinating.

Milton was incorporated as a city in 2006 and is right next door to the bigger Alpharetta on the northeast side of the ATL metro area.

It’s a bedroom community that is becoming “the” place for families seeking a quieter pace of life and a safer area to raise the family.

To get a hotel, you won’t be staying in Milton as there are no hotels.

There are a lot of hotels in nearby Alpharetta.

The area of Alpharetta Highway and Windward Parkway is the closest place with many hotel options.

Wine lovers will adore this region of northern Georgia as there are several wineries available for sipping and strolling through.

You can also walk through a farm and get some goodies while feeding the chickens.

You might even have a dog join you for a walk around the farm.

The very walkable Crabapple District is the dining destination and a mixed-use community of luxury living and fine food mixed with unique boutiques.

This is a country living near a major metro region.

You’ve got the world at your fingertips and won’t have to clutch your purse every time someone walks by.

There's a low overall risk. I can't wait to show you specifics on how low the crime rate is. It's also a growing area, so there isn't that "stranger in town" feeling you might get in some other small Georgia towns.

You're going to need a car in Milton. Atlanta's MARTA service doesn't come this far north. The closest park & ride for MARTA is 10 miles away. Rideshares and taxis are an option, sure, and those come with low risk. You are just going to be spending a lot of money on rides due to the limited amount of things to do in Milton.

There's a low risk here. No pickpockets were reported in 2020 and theft rates are a fraction of the national and state averages.

This whole area has a risk of tornadoes and severe thunderstorms throughout the year. Spring is the hot season for storms and fall brings the second storm season of the year. Winter storms are not common, but they do cause mayhem here since nobody knows how to drive in snow and the city isn't well equipped to clean it up.

There was one robbery in Milton in 2020, and it was a public robbery. There were 2 in 2019, and both were highway robberies. So, on the downside, if there IS a robbery, it's likely to happen in public, but there's a low risk of one happening in the first place.

Any large metro area will be medium risk, and while Milton is kinda on that line of "is it north Georgia or Atlanta metro?", we'll err on the side of a medium risk because any terror warnings will come through the county emergency system.

Some aggressive scams are happening in Milton, but they are all going after the wealthy residents here (average income is $127,000). No risk exists for tourists at this time.

Women are perfectly safe traveling here. Five sexual assaults were reported, making it about 1/3 of the national average. Aside from some light shopping and wineries, there aren't many places to go here to be at any kind of risk. The crime numbers change when you leave Milton, so check surrounding cities before you venture outside of the uber-safe Milton.

I've read more than 200 annual water quality reports and usually, there's a throwaway line about how safe the water is. Milton makes it a little more personalized, so I wanted to share it with you, "(The report) which shows that the quality of our water is excellent and safe, having met or exceeded all state and federal regulations."

Safest Places to Visit in Milton

A good place to start is the Crabapple Market District, otherwise known as “The Crossroads.”

This is a very walkable area with shopping and dining.

One of the local favorite restaurants is the Olde Blind Dog Irish Pub, which was Irish Pub of the Year in 2015.

The Painted Horse Winery is a farm winery, the only one in the county.

Here you can try various wines while walking through the horse stalls or taking a riding lesson.

Scottsdale Farms is like a mall inside a farm.

Tours of the farm are available and the pot-bellied pig might just be the cutest thing I’ve seen all day.

The Mark Law Arboretum at Bell Memorial Park showcases some of the diverse trees of the area and honors a local man who passed away but spent the final years of his life infusing tree beauty into every facet of the city as it grew.

This arboretum also has a Survivor Tree, which is a seedling from a tree that was damaged in the Oklahoma City Bombing in 1995.

Places to Avoid in Milton

Crime maps show the areas of Milton around Alpharetta Highway have the highest incidents reported.

It’s common for more crime to happen along highways as there are generally more people there.

However, the crime is so low here a “high-crime area” is almost laughable.

There are some golf courses in Milton, but unless you know someone who is a member, avoid trying to play golf there.

They are not only members-only clubs, they have incredibly strict rules, from the dress codes to the “no electronic device usage” rules in many areas.

You can’t even take a picture while you’re at the clubs.

This is the proper south, so be sure to remove your hat before you go inside.

It’s bad etiquette in the south to wear a hat while indoors.

If you don’t do it, someone might ask you to.

Safety Tips for Traveling to Milton

So... How Safe Is Milton Really?

It’s one of the safest cities I’ve ever researched, and that’s saying a lot.

There were no robberies in public.

There haven’t been more than three robberies in a year for at least the past decade.

There were no pickpockets or purse snatchings.

There hasn’t been a homicide since 2016.

I could go on, but you get the picture.

This is an upscale community where people pay good money to be that safe.

They expect those who visit to adhere to the upscale standards of safety and etiquette.

How Does Milton Compare?