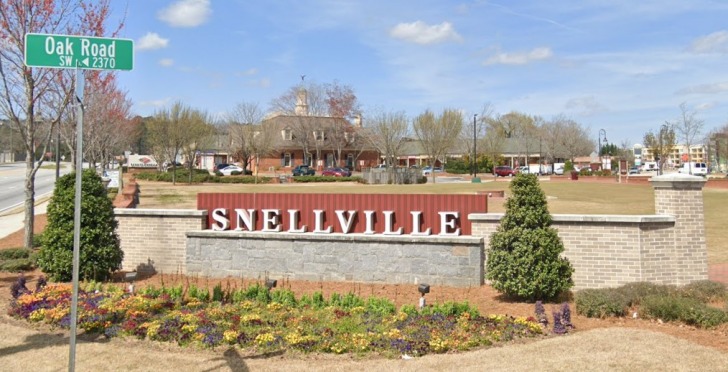 Snellville, Georgia is a small town on the eastern outskirts of the Atlanta metro area.

It’s a heavily dense residential area that’s growing while still keeping the charm that comes with a city of fewer than 21,000 people.

You aren’t going to find tons of tourist attractions here.

This is more about a community vibe and enjoying local parks and frequenting locally owned and operated businesses.

The city is diverse and in 2020 several racist letters were sent to minority-owned businesses that were incredibly offensive.

Another racist incident happened in 2021 when a little girl’s birthday party was ruined by a racial slur used on the receipt.

Business owners stood up to support one another in the aftermath of these incidents, and there’s no reason to avoid visiting any businesses here.

Half of the businesses here are minority-owned.

There is a strong Hispanic/Latino and African American population here.

The city only has two hotels, backing up the notion that this isn’t a huge tourist stop.

You’ll get all the amenities you need, like restaurants, grocery stores, and pharmacies, but you’re going to need to leave town to get to some of the bigger attractions, like Stone Mountain Park.

All of the crime data processed by the traditional way of "crime rates per 100,000" would tell you this city has a medium risk. The violent crime rate is 60% higher than the national average. However, when a city is this small, a handful of crimes can dramatically change the calculation. I've gone through the crimes that would be the biggest risk to tourists and I can tell you there's a low risk based solely on that.

There isn't a MARTA stop in Snellville, but you can take a bus to get to a transfer station for MARTA. The Xpress bus system provides service to several locations, including Stone Mountain. Taxis and rideshares are available, but might not be as abundant as in other areas. Having a car here would be ideal. There's low risk with any option you choose.

No pickpockets were reported in 2020 and I dug all the way back to 2017. Not a single pickpocket or purse snatching was reported. There's a low risk of it happening to you.

You've got to worry about thunderstorms, tornadoes, and the occasional remnant of a hurricane hitting the region. It's a medium risk because all of those elements can cause damage and be dangerous to people. All of the risks come with plenty of warning, so you'll never be caught off guard.

There's a low risk of being mugged. There were four robberies in 2020 and only one was in public. What's intriguing is that the one public robbery resulted in a loss of $16,800.

There's a low risk here. Snellville is far enough away from Atlanta, which is considered a hard target, that it wouldn't be greatly impacted. Snellville itself wouldn't be a target as there aren't many places but residential areas here.

There's a low risk of a tourist getting scammed. Most of the reported scams involve residents. There was a very elaborate scam where someone ordered a credit card in a woman's name and had it expedited shipping to the home when the scammer knew the woman was going to be at work. She charged thousand of dollars before getting caught. This is just a great reminder to check your credit report once a month to make sure no new cards were opened under your name.

There's a low risk for women here. There are not really a lot of ways to get into troublesome situations, but it's also not a place where you should let your guard down.

The water is safe here and there's a low risk of using it for bathing and drinking. Gwinett County provides the drinking water and the annual report shows no violations and that the water meets or exceeds all requirements.

Safest Places to Visit in Snellville

Being that it’s so residential and a small town, there’s not a huge list of things to do.

What I did find is pretty interesting and fun for the whole family.

Creekwater Alpacas is a hands-on experience with various types of animals from alpacas to bunnies to pigs.

The farm is open for public or private tours and you can even get some alpaca fiber socks and shirts.

The owners say alpaca fur is among the most luxurious of all animals once reserved for royalty.

Even just watching the video of this farm is making me smile so much my cheeks hurt!

You can get a great farm-to-table meal at The Kitchen at Summit Chase.

There’s a dinner menu and it’s also a great place for Sunday brunch.

The Grove at Town Center is a multi-use area that is expected to open in the fall of 2022.

Depending on when you visit this might already be open.

We’d love to hear what you think of it when you visit.

The other popular multi-use area in Snellville is the Shoppes at Webb Gin.

You can find some of the most popular retail brands and restaurants surrounding this area.

Just 10 miles away you have Stone Mountain Park which is an amusement park of nature, history, and paleontology.

You can ride to the summit in a gondola, take a scenic railroad tour, play some golf, or walk through a row of historic cottages.

There are 3200 acres to explore here.

Tickets are less than $40, which is a great deal when you compare it to the cost of a day at Disney World.

Places to Avoid in Snellville

Looking at the crime maps, the bulk of the incidents reported are happening along Highway 78 and just south of there.

This is very common to have crime along the main road in town as that’s where most people visit.

The Gwinett County Club is in Snellville, but it’s a members-only resort.

Right now there’s even a waiting list to become a member.

There aren’t any options for tourists to visit the club or play golf unless they are friends with a member and can get a pass.

Avoid trying to talk your way in.

A lot of the golf courses throughout this entire area are private.

The public courses are awesome here so don’t waste your time with a club that doesn’t allow visitors.

Safety Tips for Traveling to Snellville

So... How Safe Is Snellville Really?

Snellville’s safety doesn’t look good on paper at all.

All crime rates are higher than national and state averages. There is a lot of crime here.

Even looking at early 2022 there have been several gun incidents or “accidents”.

In one of the cases, a 7-year-old shot a 9-year-old while the mother was inside a restaurant ordering food.

The Snellville Police Department did a post on Facebook saying the FBI data report of 137 violent crimes was incorrect.

They blamed it on a programming and coding error.

They say the real number is 36 and the FBI portal should be updated with the correct information soon.

There will likely be crime happening around you, but digging into the risks a tourist could face, here’s some reassurance:

This is a small town with a little grit to it.

Community events are planned throughout the year to build unity and inclusion, and you should feel safe attending those.

How Does Snellville Compare?