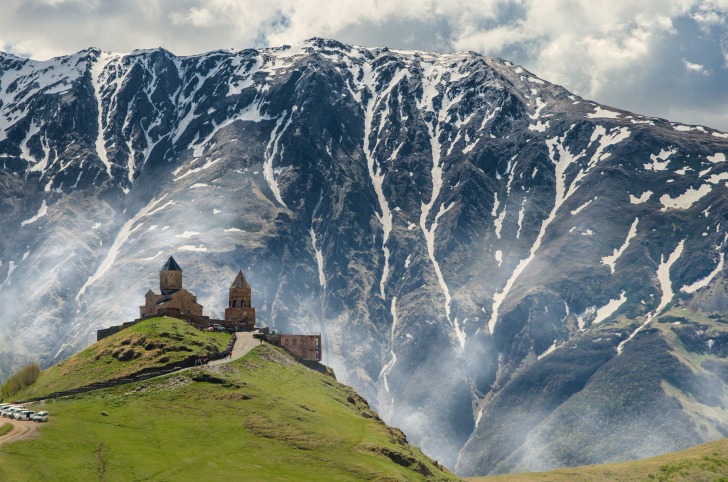 Georgia is a state in the southeast loaded with history and charm.

There are beaches in the southeast as well as Savannah, one of the oldest cities in America famous for its many squares lined with trees.

In the north, there are mountains and great outdoor areas to explore.

There is the city of Atlanta, itself a large historical city.

Atlanta has 500,000 people, but there are 6 million in the metropolitan area, half of the state’s population.

The Atlanta aquarium is the largest one in the world.

Atlanta was a big part of the civil war and the civil rights movements of the 60s.

There are several other medium-sized cities, as well as a lot of farmland, especially in the southern part of the state.

Augusta, in the west, is home to the famed Master’s golf tournament.

There is something for everyone in Georgia.

Georgia is safe but has its dangerous areas. Georgia has the 22nd highest crime rate in the United States, with 400 crimes per 100,000, slightly above the national average of 380. Georgia is slightly above the national average in many statistical crime categories. Theft and burglary are by far the most common crimes. Georgia has a lot of tourism, and most tourist areas are safe.

There is a train service and bus service in the Atlanta area. They are safe but are not good for commuting. Atlanta is notorious for its crowded highways and traffic congestion. There is not a lot of public transportation in rural areas or between cities, so if you want to see a lot of the state, you would be better off renting a car. Mid-sized cities have safe taxis from the airport to hotels.

There have been some pickpockets reported on public transportation in Atlanta, but it is not a common crime. It is unheard of in other areas of the state. It does happen though, so it is a good idea to keep your wallet or purse well hidden.

Since there is a large coastal area, there is a danger of hurricanes. There are a lot of warnings when there is a hurricane. Tornadoes are relatively common in spring and can cause a lot of damage. There are ice storms, and since snow is rare, most cities are not equipped to handle the situation. A small amount of snow can shut cities down.

There are certain areas, especially in the Atlanta area, where the risk is high. It is not a big risk in other areas of the state. If you stay in tourist areas, and out of the bad areas, you are very unlikely to be mugged in Georgia. The most common crime in Georgia is someone stealing an unlocked car. In any city, there are bad areas, but with common-sense precautions, you should be safe in Georgia.

There have been shootings and some terroristic acts, but overall there is little risk in Georgia. Recent unrest and the rise of radical groups have caused some concern among law enforcement about domestic terrorism. Cities are often a target, so there is a small risk, but there has not been much terrorism in Georgia.

Since it is a state with a lot of tourists, there are a fair number of scams. Taxi drivers may claim their meter is broken and charge you more. Some hotels are using an overbooking scam to get you to pay a high price for a low-quality place. Summer vacation rentals in coastal areas can also be scams.

Women often travel alone in Georgia and are completely safe. There are bad areas to be avoided, and common sense precautions should always be taken, but women are generally as safe as men in Georgia.

Cities provide good quality water throughout the state. The only risk you would face would be a facility with bad pipes, but that is rare.

Safest Places to Visit in Georgia

Savannah, Georgia might be the safest place to visit, and it is a historical city with lots of charm.

Buildings are dating back to the 1700s, and a famous restaurant that has been in business for more than 300 years.

The historical downtown has a lot of picturesque squares.

Atlanta is safe but has its bad areas.

The tourist areas of the city are very safe but don’t go too far off the beaten path.

Atlanta has a lot of history, professional sports, and all the amenities of any large city, as well as the world’s largest aquarium.

Coca-cola was invented in Atlanta and has a museum of colas from around the world that would take a whole day to explore.

The beaches, in places like Tybee Island, are beautiful and very safe.

Georgia beaches are not as commercialized as some in Florida or South Carolina.

The mountainous areas in the north have some of the best white water rafting in the nation.

Smaller towns also have their charm and are great places to visit.

Placess to Avoid in Georgia

The further south you go in Atlanta, the more dangerous it becomes.

The national violent crime rate is 366.

The southeastern suburb of Lakewood Heights has a violent crime rate of 994 and is one of the most dangerous areas in the nation.

The downtown area of Atlanta is safe in the daytime, but not at night, and its crime rate is well above the national average.

While the historical areas of Savannah are safe, there are a lot of robberies and assaults, as well as car thefts in the city.

Its crime rate is higher than the national average.

Albany is a small rural town in the southern part of the state, but it has a high crime rate, as well as Warner Robins and Douglasville.

Brunswick is a coastal town that has a bad reputation, and Macon is further inland and it too has a reputation for property crime.

Safety Tips for Traveling to Georgia

So... How Safe Is Georgia Really?

For the most part, Georgia is a very safe state.

Southern hospitality is a real thing, and most people will welcome you and help you in any way they can.

Atlanta is the safest area, as well as the most dangerous area at the same time.

Tourist areas are safe, and most of the city is during the day.

At night is when it gets a little dangerous.

There are areas of Atlanta that are dangerous and you should not go there at any time of the day, but you can find out where those areas are.

With basic common-sense precautions, you should be completely safe in Atlanta.

Other cities, like Savannah, Augusta, or Athens, are similar to Atlanta but on a smaller scale.

There are bad areas to avoid, but as long you avoid those, you are fairly safe.

Many people visit Georgia and there are not a lot of crimes against tourists reported.

The beaches are safe, but there are some natural dangers, such as alligators and mosquitos.

How Does Georgia Compare?