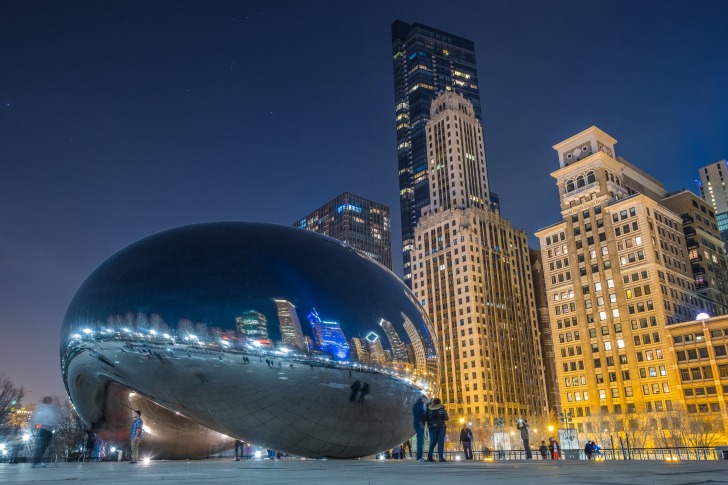 The first thing people often think of when they hear the word Illinois is Chicago.

It is one of the largest cities in America and has some great things going for it.

It also has recently gotten a reputation as being an even more dangerous place than it was in the gangster days of Al Capone.

There is a lot more to the state though.

It is nearly 400 miles from Chicago to the southern end, and nearly 200 miles wide in places, so there are a lot of areas to consider.

There are several state parks with lots of walking trails and fun things to do.

Shawnee National Forest is called the garden of the Gods because of its scenery.

The lower two-thirds of the state is relatively rural with a lot of farmland and small towns to explore.

In Chicago, there is more danger of taxi drivers being robbed than drivers doing wrong. The big city transport systems are dangerous at night but safe during the day. The lower two-thirds of the state do not have as much public transport, but what there is remains safe.

Chicago can get crowded, and in those areas, there are pickpockets lurking around looking for a victim. In more rural areas, pickpocket criminals are rare.

Illinois is pretty much flat, and does not have a lot of mountains or other geographical features that create disasters. Snow can get heavy and cause problems in winter. There are rare tornadoes that cause a lot of damage, but in general, there is little risk.

Especially in Chicago, there are areas where muggings are rather common, especially where there is gang activity. The rest of the state is not as bad, but some other cities in the state have had issues with muggings and robberies.

The rise in anti-government extremists, both far-right and far-left, has caused officials to be more concerned about domestic terrorism in recent years. A big city like Chicago would be a place where terrorists might try to cause problems. It is not a great impending danger, but something to be aware of.

Again the greater risk is in Chicago. There are fake taxies that charge extremely high rates, as well as other con games in the city. Out in the country, scams are not as common. Car repair shops might try to sell you repairs you don't need, or overcharge you for repairs.

It is dangerous for a woman to be out alone, or use public transport at night, in Chicago, but it is safe during the day just about anywhere. The rest of the state is very safe for women.

Several areas of Chicago have tainted water that may contain lead or other contaminants. It is a good idea to drink bottled water in Chicago and pay attention to any warnings. The rest of the state's water supply is in good shape and you should not have any issues.

Safest Places to Visit in Illinois

One of the safest places in the state is the Shawnee National Forest, which is 300,000 acres in the southern part of the state.

There are countless trails, great scenery, and a lot of nature to explore.

The Bahai Temple in Wilmette is the largest such temple in the world and is a great, safe place to visit.

The town of Springfield is the home of the Lincoln Museum and Presidential Library, and it is a very safe and fun town to explore.

The small town of Alston, near St. Louis, is home to the museum of torture devices, but it remains a safe town.

Much of the southern part of the state is farmland and has a lot of charming small towns that are very safe.

While Chicago has a bad reputation, there are areas of the city that are very nice and very safe.

The north side, where all the tourist attractions are, is very safe during the day, and as long as you are not alone, relatively safe at night.

Places to Avoid in Illinois

Some would say Chicago, and there are conflicting reports about the downtown area.

It is OK during the day, but iffy at night.

Public transportation is also dangerous at night because there are not as many people and stations are not as well patrolled by police.

The west and southern parts of Chicago have crime rates far above the national average with lots of gang activity.

East St. Louis, just across the river from the big city in Missouri, is a dangerous town with a high crime rate and a lot of poverty.

Peoria is another city in the state with a high crime rate and is considered dangerous from both a violent crime and property crime standpoint.

Safety Tips for Traveling to Illinois

So... How Safe Is Illinois Really?

Again, it all depends on whether you are talking about Chicago or the rest of the state.

There are some very bad areas in Chicago, but some say the national media reports of shootings and other violent crimes are exaggerated.

There are very nice areas in Chicago that are very safe, and if you stay in those you should be fine.

Other areas of the state are very safe from a crime standpoint.

According to FBI figures, Illinois had the 18th highest crime rate in the nation, compared to the rest of the states in the nation.

Illinois has seen a slight reduction in the population over the last few years, and the crime rate has risen.

While crime going up makes the news, it should be kept in mind that crime was higher in the 1990s, and is still not back to that level.

Even so, murder cases rose 38 percent in 2020 over the previous year.

Much of that crime centers around the Chicago area.

The southern two-thirds of the state is more rural and has a much lower crime rate.

Crime did increase in Chicago and other cities in 2020, but it also increased nationally as well.

Normal precautions, and little street smarts, should keep you safe.

How Does Illinois Compare?