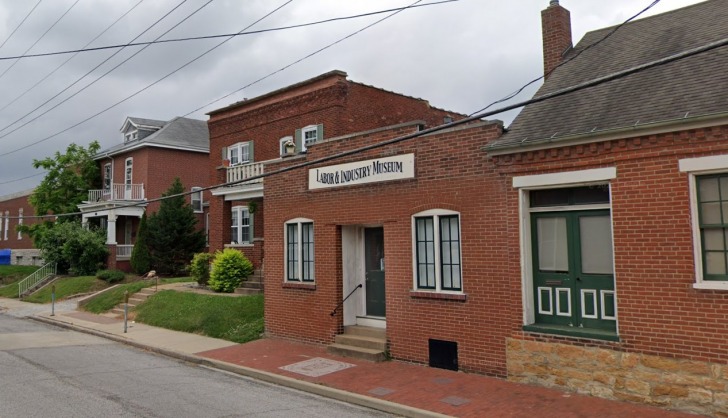 Belleville, Illinois is a suburb on the Illinois side of St. Louis, Missouri metropolitan area.

Belleville translates to “Beautiful City” in French and it’s a great description of the architectural beauty of this city.

This is a military town with Scott Air Force Base just 10 miles away while still keeping that embracing Midwestern small-town feel where everyone knows everyone.

This region is known as the Metro East of St. Louis and Belleville is a community of 42,000 people.

There is one hotel in Belleville and to find another one you’ll need to go to Fairview Heights, about eight miles north.

When you’re looking for hotels outside of that area, I wouldn’t recommend staying west of Caseyville unless you plan on crossing over the Mississippi River into Missouri.

The Belleville Historical Society is raising funds to preserve and restore cherished buildings and homes in the community.

One of the clever fundraisers is a “Belleville Fashion Through the Years” calendar and I’m smiling just looking at the cover.

Illinois loves its natural preserves and there are several around Belleville.

Being that the city is on the southeast corner of the metro area, once you leave Belleville, you’re in Illinois farmland.

Just 20 minutes south of Belleville sits the ruins of a missile site that during the Cold War hosted a “Hercules” missile to protect the country from a nuclear attack.

The site does show up on Google Maps, but it’s private property now and no trespassing is allowed.

True crime lovers and/or Lifetime Movie fans will recognize the story of Ashley Reeves, a young woman who was “Left for Dead” by her teacher, Sam Shelton.

The two had a brief relationship and one night Shelton snapped, strangling her and leaving her assumed dead in Laderman Park on a brutally cold night.

Reeves survived and had to relearn to walk and talk all the while hoping her attacker would face justice.

Reeves is now living a private life while Shelton is in jail for the heinous act.

There's a low risk, but wow, some of the crime data makes me nervous. Violent crime and property crime rates are higher than the Illinois average, but not by much.

The St. Louis Metrolink rail line has three stops in and near Belleville. The city is also located along major highways in St. Louis and Metro East area, so having a car is ideal to get around. Taxis and rideshares are available. There's low risk with any option, but always use caution on public transportation and keep your belongings close and secured.

The main reason I'm giving this a low risk is that there aren't a lot of crowded spaces where someone can snatch a wallet. The theft rate here is one in 60, so you still should take preemptive steps like not leaving your purse on the back of a chair at a restaurant.

This area is ripe for tornados and severe thunderstorms in the spring, although it has been a while since a major tornado hit this area. Since it's such a rural place, it's hard to measure the damage of the tornados that do come through here if they hit the edge of town. Winters are going to bring extreme cold at times, and snow. It's also not uncommon to get an ice storm here. Since the risks exist all year long, there's a medium risk, but an average day is going to be low-risk as long as you stay weather aware.

This is one of the more confusing crime statistics since all of the other major categories are above the national average. The robbery risk is one in 1927 with 35 reported in 2020. That's 35% lower than the national average. There's a low risk, but with the way data is reported, some of the 236 violent crimes could have started as robberies and escalated to worse crimes, so never fight back just to keep a wallet, purse, or mobile device. It's not worth risking your life.

There's a medium risk here because of the proximity to Scott Air Force Base on top of being part of a large population center like St. Louis. Let's not forget that nuclear missile that used to sit in the field just a few miles away. You can be assured that the military and homeland security take extra steps to keep this city safe.

Given that it's not a city designed for tourists, it's not going to have too many tourist scams. Most of the reported scams are spoofing or phishing variety. There's a low risk you'll get scammed, but never go for a deal that seems too good to be true.

Ladies, I want you to be extra careful here with your personal safety because the sexual assault rate is almost four times the national average. Unfortunately, the way the data is presented, there is no breakdown between domestic sexual assaults and those against strangers. Because of this very high number, it's medium risk.

There's a low risk in the tap water here and I'll let the President of American Water, Justin Lander, sum up the 2020 Annual Water Quality Report with this quote, "We take water quality so seriously that 7 of our water treatment plants have been nationally recognized with Directors Awards from the U.S. Environmental Protection Agency’s (EPA) Partnership for Safe Water program for surpassing federal and state drinking water standards."

Safest Places to Visit in Belleville

You should visit the Belleville Historical Society and see what attractions are open closer to the time of your visit.

Right now there are reports of museums being built or restored, but then the reports dry up after 2018.

You can visit the Labor and Industry Museum that’s located there to learn about working in the factories in rural Illinois in eras gone by.

Check out the Belle-Clair Fairgrounds and Expo Center to see what events are happening during your visit.

Be sure to look for the murals on the outside walls for some Instagram-worthy moments.

There’s a Facebook page for Belleville Ghost Painting sights, which is when the painted signs on the side of buildings are fading, but can still be seen.

I grew up in St. Louis and one of my favorite fall activities was going to Eckert’s Country Store & Farm for apple picking and pumpkin patches.

I’ll never forget buying funnel cake mix at Eckert’s when I was 12 and making funnel cakes for dinner that night for my whole family.

There’s a seven-mile long walking trail where you can take in the scenery of Belleville and it’s a great place to go for a morning run or an evening walk.

No matter what religion you are, or even if you don’t have a religion, the Cathedral of St. Peter is a beautiful display of English Gothic architecture.

If you are visiting around the holidays, don’t miss the Christmas village of Christkindlmarkt, which celebrates the season with German flair as many of the settlers here were of German descent.

Placess to Avoid in Belleville

Crime maps show the northern side of the city has the most crime rates and the farther west, south, or east you go, the lower the crime numbers get.

Keep in mind, the farther you go in those directions, the more rural it gets too.

There aren’t those “too dangerous to drive through” neighborhoods, but with the way Illinois gun violence is escalating, that could change.

It’s always safe to stick to the surface streets unless you are driving through a designated historic district.

Since this is my hometown metro area, I feel inclined to share with you some mispronunciations of names in this region:

Safety Tips for Traveling to Belleville

So... How Safe Is Belleville Really?

Belleville is facing the same increase in violent crime as in other Illinois cities.

There’s a one in 179 risks of being a victim of a violent crime.

However, many of those crimes are due to drug use or gang violence.

The average tourist shouldn’t be worried about that.

The downside of Belleville is there isn’t much to do, unless you are here visiting friends and family.

You won’t have hotels here and you won’t find a lot of attractions.

There are better places to stay in the Metro East that offer a wide variety of things to do in a safer environment.

However, it’s not an inherently dangerous place to say.

St. Louis is habitually ranked as one of the most dangerous cities in the nation.

That’s a really broad brush stroke for an area with so many neighborhoods and districts.

I grew up in St. Louis and I made some poor choices when I was traveling around.

The worst thing I saw was a neighborhood where I was told by a police officer at a stop light to immediately get out of the area for my own safety.

You can find trouble here, but you also aren’t going to run into it if you’ve done smart research of the neighborhoods.

How Does Belleville Compare?