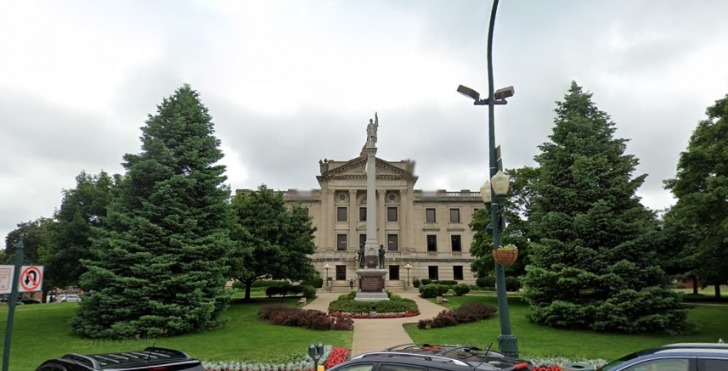 Sycamore, Illinois is a small town that is generally connected in every sentence with the city of Dekalb.

The Sycamore/DeKalb area is home to about 60,000 people, with Sycamore the smaller of the two with less than 19,000.

This area is home to Northern Illinois University, which is technically in DeKalb, and that adds another 20,000 students to the area each semester.

Sycamore is less than 70 miles from downtown Chicago but feels like a world away.

It’s 40 miles from Rockford, to the northwest, but when comparing the crime rates, they might as well be on different planets.

This is also home to one of the longest cold cases involving a murdered child from the 1950s.

Maria Ridulph went missing while playing in the snow one night, and her body was found four months later.

It took until 2012 to get a conviction in the case and that was overturned in 2016 after evidence proved the jailed man was wrongly convicted.

There’s a plaque in Maria’s honor in the center of Sycamore.

Make no mistake that this is small-town Illinois.

There isn’t going to be an abundance of activities to do here, and to the south and west, there are just a lot of cornfields and other small towns.

Some people are surprised at how rural Illinois is outside of the Chicago area.

You’ll only have three hotels to choose from in Sycamore and might end up staying in DeKalb, which only has six hotels.

What you will find here is small-town charm and some historical sites with a few outdoor activities.

The city is home to a popular Pumpkin Festival every fall.

There's a low risk here. The crime rates are low and there have only been two homicides since 2010. Don't let the cold case of that poor child make you think this isn't a safe place to visit.

There is a bus system that takes you through Sycamore from 7:00 am to 9:00 pm. The "blue line" is the route you'll take. You can call taxis or rideshares, but don't expect them to show up quickly all the time. Small towns mean fewer drivers. You can rent a car if you'd like, too, but that will be done at the airport since you have to drive to get to Sycamore anyway. All options are low-risk.

There is a low chance of being pickpocketed here. Identity theft counts for 1/3 of the thefts here. Shoplifting is another 1/3 of all thefts. The risk of being a theft victim is one in 331.

Search YouTube for "Sycamore Tornado" and you'll see how quickly a storm can turn into a dangerous tornado here. The most recent one was in 2021. You have to be weather aware during the warmer months when there's a risk of severe weather. Winter is going to bring snow and possibly ice storms, so that is another risk to prepare for when visiting. There's a medium risk because of the potential for severe or extreme weather, but on an average day, there's not much to worry about aside from the summer humidity.

This city hasn't seen more than two robberies in a year since 2010, so there's a low risk of being mugged. It's a bit of an anomaly in a state where small towns are being rocked by increased gun violence. If you have Rockford on your list of places to visit while in the Sycamore area, I strongly recommend you read the article we have on that city because it's a totally different crime climate.

There's a low risk here because it's a small town and it's far enough away from Chicago that an attack there wouldn't have an impact here.

You shouldn't have to worry about being scammed as this isn't a big tourist destination. Identity theft has been a big problem the past couple of years in the city, and the city police tell me that's because of unemployment fraud, and not because of stolen credit cards or bank statements.

Women have a low risk when traveling here, and might even be surprised at some of the shopping and spa amenities in this small town. You can't expect too much from it, but I've seen some small towns that hardly have a nail salon, much less a full day spa.

This is a medium risk and I want you to hear the full story here first before you start hearing exaggerated tales in Sycamore. It started with some yellow water coming from the faucets of some homes in the past couple of years. If you look at the annual water quality report the city puts out, you'll see on paper that the water is perfectly safe to drink. The city even has a statement on the website that reads, "The results of tests confirm that the City of Sycamore water meets or exceeds all EPA drinking water requirements and is safe for consumption." However, residents fed up with the yellow water did their own testing and higher than acceptable levels of lead were found. Now, there's a lawsuit stemming from the public district of the city and an investigation into why different water quality tests show different levels. I'm really watering down this story (no pun intended) to give you an overview because it's much more complicated than that. However, if I were you? I'd bring my own bottled water and avoid ingesting the water here until the city gets it figured out. One defense for the city is that the water is clean when it leaves the treatment plant, but gets contaminated when going through the pipes of some neighborhoods. Other city leaders just insist the water is safe without further comment.

Safest Places to Visit in Sycamore

This is a great place to meet people and ask about upcoming community events.

There is also a calendar on the city website.

In summer, you can take a walking tour of the historic areas.

There’s a self-guided or docent-led tour.

The history museum has an exhibit showing “The History of DeKalb County in 100 Objects.”

There’s a walking or bicycle trail system between Sycamore and DeKalb, including one that runs back and forth between both cities and is six miles long.

Fall is a great time to visit here, not just for the Pumpkin Festival, but some of the local farms open their barns for corn mazes and pumpkin parties.

Johnson’s Family Farm in Sycamore is one of the most popular farms to visit.

If you are in the area on Thanksgiving weekend, visit Whispering Pines Reindeer Ranch and see the reindeer getting ready for the big journey on Christmas Eve.

In the winter, this is a great snowshoeing trail.

You’ll find many local or regional restaurants in Sycamore and some of the bigger national brand locations in DeKalb.

Places to Avoid in Sycamore

Crime maps show the highest crime area is the central west side of town, but you really don’t need to worry about ending up in a bad neighborhood here.

The community is safe and pretty quiet.

As you can see from the things listed above, there isn’t a whole lot to do here.

You should avoid driving too far, if at all when there is ice with any snowstorm.

The roads can become incredibly slick.

Even though this is mostly flat terrain, there are a lot of two-lane roads here without a median and one little slick spot could cause a bad accident.

If you’re just trying to find a fun small town to visit in Illinois, there are more lively places than Sycamore.

It’s a pretty standard town with a decent amount of history, but other than that, you’ve got to like trails or parks.

You might want to look to cities like Galena for a small-town vibe with a lot to do.

Safety Tips for Traveling to Sycamore

So... How Safe Is Sycamore Really?

This is a very small town that seems to have escaped the bad gun, gang, and drug problems that plague some other small Illinois towns.

Here’s how the crime numbers look from 2021:

DeKalb is a more dangerous city when you compare crime rates.

For example, the violent crime rate comparison is:

The property crime comparison is:

You are definitely choosing a safer option by staying in Sycamore.

There just isn’t as much to do and you’ll find yourself going to DeKalb more than likely.

How Does Sycamore Compare?