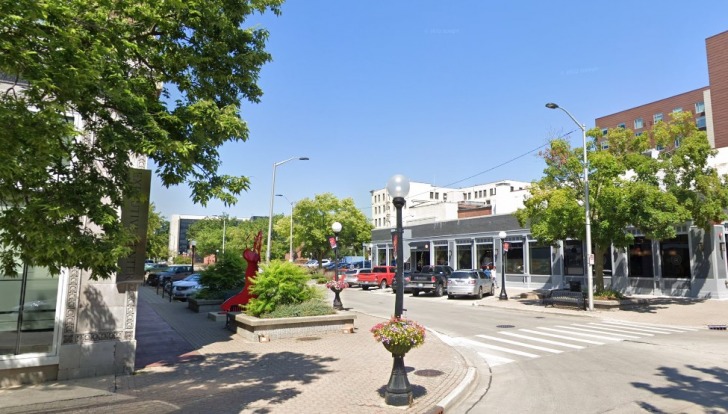 At first glance, Champaign, Illinois, can be written off as a college town with little to do on some of the flattest lands you’ll ever see.

If that’s all you see, you aren’t looking closely enough.

This city is alive with an entrepreneurial spirit, high-class education, a foodie’s dream, and affordable travel with some of the nicest people you’ll ever meet.

The area is generally referred to as Champaign-Urbana with respect to the neighboring city that shares the boundaries of the University of Illinois.

The university also helped set the stage for the region to be nicknamed the Silicon Plains.

This is also the home base for the “freaky fast” sandwich chain Jimmy John’s.

This was the home of the first Farm Aid concert in the 1980s and once you get outside of the city limits there’s farming as far as the eye can see, making for some great farm-to-table food.

The area is quickly getting a reputation as one of the best communities in the Midwest.

While the college brings a youthful vibe, the city is more than its hallmark university.

There's low risk with one caveat. Champaign has seen a massive increase in gun violence over the past few years. In 2021, the city broke records with 243 shootings, and 16 people were killed in gun violence. The city and law enforcement are taking immediate and swift action to tackle this growing problem.

The theft rates are actually lower than the national average, which is a nice break from the increasing gun violence. There's a low risk of getting pickpocketed or having a purse snatched, but when attending one of the many festivals in the city, you should use extra caution.

You're going to face the risk of tornadoes and severe weather from spring through fall, with spring being particularly tough. Winters will bring snow and ice, but it's rare a snowstorm shuts down the city. Small earthquakes are also possible. While there's low risk on an average day, that risk goes to medium in spring during tornado season.

There's a one in 1003 chance of being a robbery victim, which is higher than in many other communities. Given the increase in violence, I want to err on the side of caution and call this a medium risk. If you are ever robbed, don't fight back. Just hand over your belongings and remember as much information as you can to give to the police.

There's a low risk of Champaign being a hard target. Between Chicago and St. Louis, which are both just hours away by car, those two cities are more likely to be terror targets than Champaign-Urbana.

Several scams are going around the area in mid-2022, many of which are targeted at locals. The one I'd warn you about is a scam where someone tells you that you won a content (which you never entered). Never buy gift cards or wire money as part of a process, whether it's claiming a prize or renting a home.

The sexual assault rate is more than twice the national average. Given that this is a college town, there are a lot of places to party and that could lead to you letting your guard down and ending up in a dangerous situation. Always be responsible when drinking and don't take a drink you didn't see prepared so you can avoid someone slipping a drug into your drink. Always leave a napkin over the top of your drink as well. If you practice these good safety steps and avoid wandering around at night by yourself, you'll have a low risk.

Nearly $200 million was invested into the water treatment process in Champaign in 2021, leading to another year of a water quality report that showed no violations and passed all requirements. You can feel safe drinking the water here with low risk.

Safest Places to Visit in Champaign

Go hungry and sample a little bit of as much as you can.

If the weather is nice, check out the University Avenue Tree Walk Guide to burn off some of those calories.

This city has so many trees with so many different varieties.

There’s a map on the city’s website that shows exactly where to go to see specific trees.

The Staerkal Planetarium is on the university campus and tours are open to the public.

Don’t miss the scaled replica of the solar system on the way in.

You can also rent a telescope here for the night or weekend if you’d like.

The Spurlock History and Art Museum are on campus as well and is free.

There are 10 museums in the Champaign County Museum family, ranging from nature to music.

Alto Vineyards is a winery on the north side of town and is one of two in the state.

It is closed on Mondays but there are events every other day of the week.

You also have a wide variety of city and county parks to choose from.

One note here is that there aren’t any large lakes in Champaign.

Most of the parks are going to be land only, maybe with a pond or two, but there’s still plenty to explore.

Placess to Avoid in Champaign

I have to say that personally the increased violent crime rate really breaks my heart because being from St. Louis I had several friends who went to the University of Illinois and I spend many weekends here in my younger years having fun and meeting some really great people.

Crime maps show the areas just south of I-74 have the highest crime rates, and the farther south you go, the fewer incidents happen.

This is a spirited college town, so you are going to hear a lot of chanting for the Fighting Illini.

People tend to say “I-L-I” and you are supposed to respond “I-N-I”.

Unless you have a dog in the collegiate sport’s fight, just say it back to appease the person.

There’s a lot of pride in the local sports team.

Safety Tips for Traveling to Champaign

So... How Safe Is Champaign Really?

The gun violence numbers alone might be enough to make you think twice about visiting this city.

Local leaders and law enforcement saw the problem getting worse and exacted a blueprint plan to reduce the gun violence and add those license plate readers and gunshot detectors.

While a good portion of the shootings is related to retaliation or domestic/personal issues, there was one incident where someone honking at another person for cutting them off in traffic led to the honker being shot and paralyzed.

That’s more than double the rate at the national level.

However, there’s not an overwhelming chance you are going to be a victim if you mind your own business, drive safely and respectfully, and avoid any parts of town where you don’t have a reason to be there.

This is a city that used to be safer, and hopefully will be again, but for now, it’s a city with a growing gun violence problem without a whole lot for a tourist to do.

If you are visiting friends or family here or attending an Illini game, you shouldn’t worry about the dangers.

If you just want to visit a quaint Midwestern city, there are safer options out there.

How Does Champaign Compare?