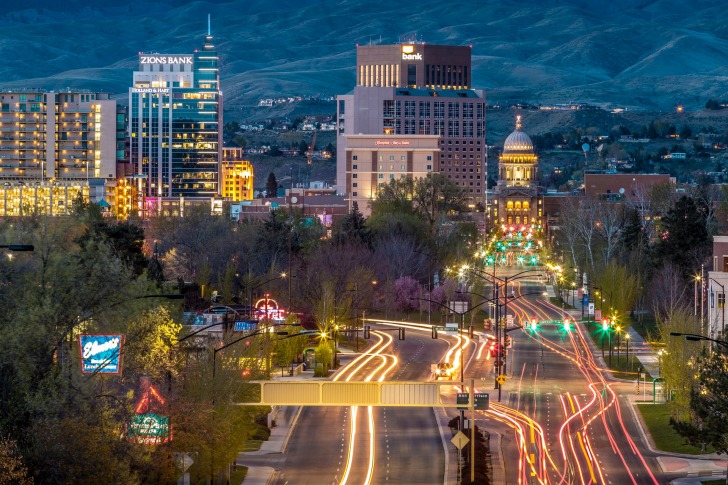 Idaho is a rural state full of natural wonders.

There are lots of wide-open spaces and wildness to explore.

The crime rate is low, in part because of a low population.

The more dangerous things in Idaho are natural.

Things like landslides and wildfires are a real danger, as well as wild animals.

You are more likely to be threatened by a bison than by a mugger, and the bison is faster.

If you love the outdoors, you will love Idaho with all its spectacular scenery.

Gorgeous mountains and rivers along with thousands of miles of hiking trails await the adventurous.

The outdoors has its own kinds of dangers.

There are cities like Boise that are nice and not all that dangerous.

There are 30,000 miles of hiking trails and 3,000 miles of whitewater that can be rafted, and that is just the beginning.

If you are an experienced outdoorsman, you will not likely have any problems. People who are not used to the outdoors could get in trouble here. There are wildfires every summer, as well as landslides and earthquakes to look out for.  The risk is getting more in the way of mother nature than from another human being.

Getting from the airport to a hotel, or from a bus stop, should be easy in the cities that have them. Like most rural states, there is not an extensive public transportation system. When they are there, they are excellent. If you are going out of town, you would be better off renting a car.

Petty criminals steal things that are not locked up, or that are carelessly left out in the open. Pickpocketing is not a popular crime here. If you leave your car unlocked, someone may happen by and help themselves to your property though.

As noted, nature is a bigger risk than crime in Idaho. Pay attention to weather reports and warnings that are broadcast. Wildfires can travel faster than you can, so stay out of their way. On remote roads, look out for landslides and bison in the roadway.  If you do not have much experience in nature, it would be a good idea to learn more before you go.

Muggings are virtually unheard of in most of Idaho. It is not how criminals operate here. There are some cities with high crime areas where mugging could be a possibility.  Ask around and follow local people's advice. It's easy to stay out of those areas and you have very little risk of being mugged.

Like muggings, this is almost unheard of in Idaho. There are lots of outdoorsmen, and guns are popular, but there have been very few cases of terrorism or mass shootings in the state.

In some tourist areas, there may be fake tours offered, or someone may want to sell you a vacation of some kind. Be smart and only deal with licensed reputable dealers. Some auto shops will try to overcharge you or try to sell you unneeded repairs. Ask locals for advice if you need car repairs done.

Women often travel alone in Idaho. It can be dangerous for a woman to hike in remote areas alone, as there may be people waiting for a victim, but the greater danger would be wild animals. In cities, there is not much danger if you stay in well-lit areas and avoid being out at night alone.

Tap water is fine in Idaho, even in small towns. There are good water systems. At times there can be water shortages or rationing, but generally, there will be tap water available.

Safest Places to Visit in Idaho

There are 31 scenic highways in the state, the longest of which is just over 200 miles.

These go along tree-lined rivers, through mountains, and offer scenery that is beyond description.

The Idaho Dept. of Tourism offers many itineraries and more information than you could possibly digest.

A travel study released by MSN recently named Boise one of the safest cities in the world, with a score of 81 out of 100.

It was ranked eighth overall, and one of only two in the United States.

Salt Lake City was the other one.

The study was based on tourist and resident attitudes towards how safe they felt.

Boise is the largest city and has a lot of trails and bike paths.

The small town of Kimberly, near a ski resort, has the lowest crime rate n the state.

Placess to Avoid in Idaho

Garden City is a town of 12,000 and is surrounded by the state capital of Boise.

It has the highest crime rate in the state both for violent crime and for property crimes.

It is above the national average in both categories, and there is a one in 38 chance of being a crime victim there.

Pocatello, also near Boise, is a city of 55,000 and has a crime rate that is similar to Garden City.

Twin Falls is a city of 50,000 and has relatively high crime, and ranks third in the state.

Twin Falls also ranks among the poorest cities in the state.

Surprisingly enough, the largest city, Boise, is not on the list of high crime rates in the state.

Towns like Twin Falls are next door though, and that should be avoided.

Safety Tips for Traveling to Idaho

So... How Safe Is Idaho Really?

A study published by MSM called Bosie one of the safest cities in the entire world, and only two cities in the United States made that list.

Even though Boise is the largest city, it does not have the highest crime rate.

Many smaller towns have a higher crime rate.

Places like Garden City and Pocatello have high poverty rates, and they also have high crime rates.

They are the only cities in the state that are above the national average as far as crime goes.

If you stay away from the few areas where there is a lot of crime, you should not have any issues as far as being a crime victim.

Perhaps it is the rural nature of the state, but the crime rate is low.

Of course, you should still take necessary and sensible precautions.

Don’t go out at night alone in cities and lock your car.

If you do those sensible things, you shouldn’t have any trouble in this state.

Nature itself is perhaps a bigger danger.

If you are in a remote area, you should not be alone, and be sure someone knows where you are.

There are rattlesnakes that are very dangerous.

Bison and bears are also dangerous, and should never be trifled with.

They are faster than you and will attack if they feel provoked or threatened.

Having your car break down in a remote area is also a danger because there are areas with no phone service.

Sometimes you may be a hundred miles from the next service of any kind.

Even so, with some common sense, you should be able to avoid natural dangers as well in Idaho.

The bottom line is, Idaho is a very safe state for travelers and for residents.

More people are moving to the state for that reason.

How Does Idaho Compare?