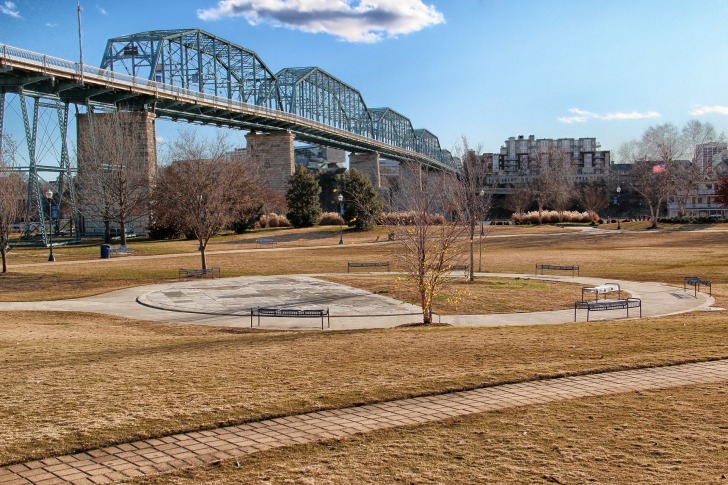 Tennessee is a southern state that is divided into three sections by the Tennessee River, and each is distinct.

The east is in the Smokey Mountains with lots of parks and scenic areas.

Knoxville is a major city and has the University of Tennessee, and nearby is Oak Ridge, which was part of the Manhattan Project that built the atomic bomb.

The middle has more rolling hills and Nashville, the home of country music.

Nashville is the state capital and very popular as a tourist destination.

Chattanooga, to the south, has a lot of history in a relatively mountainous area.

The west is part of the Mississippi Delta and largely flat.

Some say this is where rock and roll music was born.

The state has several historical battle sites from the Revolutionary and Civil Wars.

Memphis is one of the most dangerous cities in the nation, and that may skew the stats. Tennessee is third in the country in crime per 100,000 at 672. The national average is around 400. Nashville is safe for the most part, as is Knoxville. Chattanooga has a reputation for crime. Most of the state is safe, but some areas are dangerous and should be avoided.

Taxis operate in many cities and are safe. The larger cities have public transportation and it is fairly safe but often not the cleanest. Nashville has a country music circuit that hits all the main spots in town. Memphis also has special buses for tourist areas. If you plan to leave the cities, it is a good idea to rent a car, as there is not much public transport in rural areas.

In recent times, pickpockets have surged in Nashville in tourist areas. They target wallets, purses, and cell phones. Tourist areas of Memphis are also hot spots for pickpockets and purse-snatchers. Especially in the cities, you need to be watchful and protect your property.

Because of its location and geography, Tennessee is likely to have natural disasters. There are tornadoes, floods, severe storms, and some earthquakes. One survey ranked Tennessee as the fifth most dangerous state in the country. Still, most people feel they are safe in the state.

There are areas in Memphis or Nashville where the risk of mugging or robbery is very high. The state has the highest rate of assaults per capita. In the rest of the state, there is little danger and muggings do not happen very often. Some areas are very dangerous, but most of the state is safe.

There was a bombing just before Christmas in Nashville in 2020, not officially called terrorism, but it is the kind of thing that can happen. They are not common in the state. A growing concern is a domestic terrorism from extremist groups.

The risk is fairly low for tourists, though there might be the occasional fake ticket being sold for an event on the street. Real estate scams are common but do not target people just visiting. Internet and phone scams are the greatest danger, with people trying to steal identities or get money from people in some way.

Tennessee has a strong tourist industry, and women traveling alone is very common. Most areas are safe, but some areas are not. It is dangerous for women to be out alone at night in the bigger cities, but that is true for men as well.

There is a lot of water in Tennessee. Big rivers and the creation of lakes by the TVA make the water supply plentiful. Cities provide treated water that is of high quality. No matter where you are in Tennessee, you are safe drinking the tap water.

Safest Places to Visit in Tennessee

The Smokey Mountain National Park in the east may be the safest area in the state.

The greatest danger there would be from a wild animal, and incidents are rare.

There are a lot of rural areas where there are interesting sites that are extremely safe.

The Jack Daniels distillery can be toured and is very safe in a small town.

Gatlinburg, near Knoxville, is a tourist area and a gateway to the Smokey Mountains and is very safe.

Downtown Nashville is a big tourist area with a lot of security.

Nashville was named one of the safest cities in the country for tourists by an international tourist group.

With common sense and basic precautions, this area is very safe.

While parts of Memphis are dangerous, the suburbs of Germantown and Collierville are the two safest cities in the state.

Tourist areas of Memphis are loaded with history and basically safe.

Placess to Avoid in Tennessee

CBS News named it the third most dangerous city in the nation.

The national average is 380.

Memphis is ranked as the most dangerous some years because of its murder rate.

The north and south sides of the city are the most dangerous.

The eastern side seems like a different world and is very safe.

Nashville has some bad areas downtown, but the northwest side is the worst area.

Police patrol the tourist areas all hours of the day, but it still pays to be vigilant in these areas.

Nashville and Memphis both have high assault rates.

Safety Tips for Traveling to Tennessee

So... How Safe Is Tennessee Really?

While Memphis is one of the most dangerous cities in the nation with a high crime rate, the rest of the state is generally below the national rate.

Most of the state is safe, with a few extremely dangerous areas.

The national average is about 400.

Even so, some areas of Memphis are very safe.

Memphis is a much larger city, but the crime rate is still significantly higher.

Residents of Tennessee feel safe in their homes, which is a good indication of general safety.

When it comes to violent crime, 47 percent feel concerned, and the national average is 41 percent.

Tennesseans are at the national average for property crime at 42 percent.

Over the past year, 29 percent of people surveyed experienced property crime, and 17 percent experienced violent crime.

This means either they or a family member was a victim.

Some towns have very little crime.

Church Hill, a small town in the eastern section, reported no violent crime and only 10 property crimes over the past two years.

They are small towns, but the top five reported no murders and five or fewer violent crimes.

In Tennessee, it seems where you are has a lot to do with how dangerous it is.

Staying out of bad areas, and normal precautions in other areas should keep you safe.

Ask at your hotel if any areas should be avoided.

Sometimes just a block or two can make a tremendous difference in the level of safety.

How Does Tennessee Compare?