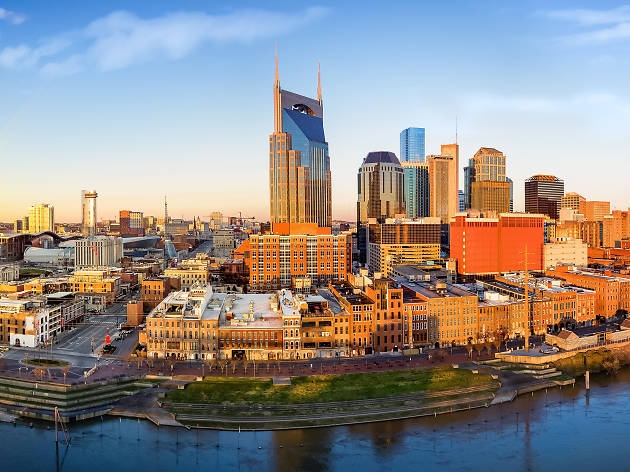 Nashville, Tennessee, is Music City, and there’s no way to get around that when you visit.

Live music streams from bars, restaurants, front porches, and even inside shopping malls.

Sometimes referred to as “NashVegas,” this city has grown into a theme park of musical adventures, big-name honky-tonk bars, and a trendsetting city of the South.

In the past decade, this fast-growing city has gained nearly 90,000 new residents, making it one of the fastest-growing cities in the country, with a population of just under 700,000.

Nashville also has a great layout with comfortable suburbs, an urban edge, and entertainment areas that make you tap your heels without even noticing it.

This is a great foodie town, too, from the home-cooking of the South to inspired menus by top chefs around the country with a good number of nationally-known brands too.

Whether you want to shop at the outlets, get a custom pair of boots, or look at unique bounties, there’s a place for all of them.

It’s ideal if you can spend a few days here to enjoy the glittering Honkey-Tonk Highway, The Grand Old Opry, and the great outdoors of Tennessee.

As a lifelong lover of American road trips, Nashville is one of my Top 5 favorite places to visit. That's why it pains me to tell you there's a medium risk in the city. The violent crime rate is nearly three times the national average and growing. You likely won't feel the impact for those sticking to the Honkey-Tonk Highway and Opry area. I haven't once felt unsafe in Nashville. I was also very particular about where I visited and what time of day.

Bus or commuter rail lines offer public transportation. Taxis, rideshares, and rental cars are readily available. You can also rent a limo or see if your hotel has a shuttle (Gaylord Opryland Resort is a great choice). During big musical events or award shows, there will be additional transportation options for the influx of visitors.

With nearly 19,000 thefts, the 185 pickpockets and purse snatchings don't seem to make too much of a dent in those numbers. You still need to use caution and limit what you carry to bare essentials. Your ID, one credit card, and a small purse or wallet kept out of sight are ideal. Don't put a wallet in the back pocket.

Nashville can get a lot of different types of severe weather - notably tornadoes and severe thunderstorms. You can search for this on YouTube and see some of the disasters from just the past decade. Winter can bring snow storms, blizzards, and ice storms. Severe thunderstorms are also possible in the winter, but the highest risk season is spring. You do have some of the best meteorologists in the country here, so you'll be well-informed about local risks during your visit.

The robbery rate is almost four times higher than the national average, and 78% of robberies happen outside of private or commercial homes. 24% are considered "highway robberies," which are robberies on public streets or spaces that aren't a business. Treat this with medium risk and limit what you carry around. If you do come face-to-face with a robber, please just follow instructions and don't fight back.

As Nashville has grown in popularity, it has also drawn unwanted attention to potential terror groups. It's a medium risk due to the size of the city and the big events that happen here, but you'll also get an abundance of security.

You can visit the Tennessee Attorney General's website to see the latest scams happening in a given season. The unfortunate part is you can't trust anyone who approaches you on the street. While you don't need to be rude, you should always be on heightened alert that someone is trying to get your hard-earned money. Use official websites for tourism to get discount tickets instead of exchanging money on the street, and never fall for any scam that pressures you to give money because of the threat of arrest or other potential risks.

Women are statistically less likely to be a victim of violent crime in Nashville, and it's a very popular place for girlfriend getaway weekends, bachelorette parties, and reunions. Don't let your fun get so off-kilter that you forget common sense. If you are drinking, don't leave a friend behind or let anyone go home with a stranger. Use taxis or rideshares to get home and avoid walking alone at night on less-crowded and poorly-lit streets.

The 2021 Water Quality Report shows full compliance and no violations in the thousands of drinking water tests performed each year. You should only worry about water quality if flooding happens during your visit. Also, older hotels can have lead or copper pipes, which could cause water quality issues beyond the control of the water utility. When in doubt, let the water run for two minutes before using it to get any contaminants flushed out.

Safest Places to Visit in Nashville

We always recommend using a site produced by a tourism or convention bureau because you know the website is safe and the links are going to be secured.

You’ll also find out about verified deals and discounts instead of risking a scam on the streets.

The Country Music Hall of Fame and Museum is a great location to begin your trip to learn about what makes this genre of music so special.

More than two million items are displayed here, so give yourself a few hours for this visit.

The music museums are plentiful, and while there’s not enough space to describe all of them here, this is a list of the more popular ones:

The Music City Walk of Fame Park is downtown and has stars like Hollywood Boulevard in California – but for musicians.

This is also a place where live music will be played at various events throughout the year.

Then there’s The Grand Ole Opry, which deserves its own description.

It is about 20 minutes from downtown.

Take a tour of the big stage or buy a ticket for an upcoming show and experience it with a live performance.

Even the tours here are offered in different genres, from backstage tours to female country music stars to a tour behind the scenes of a live show.

Nearby the Grand Ole Opry is Gaylord Opryland Resort and Convention Center.

The Opry Mills Outlet mall is next door, giving a nice variety of things to do if you don’t want to stay in the downtown area.

The Opryland Resort is massive – I can tell you from personal experience because I had to get a security guard to help me find my room one night.

The pathways are color-coded to keep you on track, but even with that, I got lost.

There’s a whole world of decorations and themes inside this resort, so stop by even if you aren’t staying at the hotel.

Broadway is the street to visit downtown.

Music Row and the Honkey Tonk highway are a must-see for first-time visitors.

Here you’ll find some of the museums mentioned above, but more bars than one group can visit and more food than you can digest even on a full weekend.

It’s a charming street with a great vibe, and the smell of food lures you around while the live music makes you dance on the sidewalk.

Once you are hungover and ready to get away from Broadway ready to explore the great outdoors, Nashville is ready for you.

Take a trip to President Andrew Jackson’s mansion at The Hermitage.

You can visit the exquisite home and the beautiful gardens, then pay tribute at Jackson’s Tomb.

“Old Hickory,” as he was known, might have been a tough guy, but he sure had class and style too.

Shelby Park isn’t too far from downtown, but it feels like a world away as you sit on the banks of the Cumberland River or go for a hike in the rolling hills.

You can play golf here too.

Check the events calendar to see what kind of special festivals are going on during your visit.

Places to Avoid in Nashville

When you look at crime distribution maps of Nashville, it looks like the whole city runs amok with crime, and there isn’t a safe place to lay your head at night unless you’re in the outside circle of the city limits.

The best advice for Nashville visitors is to stay in your lane – meaning to go to the places where you want to visit and don’t drive around aimlessly.

You’ll also find that Music Row and the Honkey Tonk highway have few locals aside from the people who are working there.

I totally understand that as someone who lived in Las Vegas and would say, “Do you REALLY want to see the Bellagio fountains AGAIN?” to my friends who visited.

What that means for you, as a tourist, is that when you are in crowds of the entertainment districts, you’re likely to be among drunk people, those who have no idea where they are going, or thieves looking for a crime of opportunity.

Even Opry Mills Outlet Mall has made the list of “most dangerous areas,” yet I’ve shopped there more than a dozen times.

You must remember this is a city that has grown fast, and it’s not built on top of itself.

There are suburban areas that look and feel safe but could have neighborhood-specific crime rates.

East Nashville has some bad neighborhoods, as does the area around Midtown.

Safety Tips for Traveling to Nashville

So... How Safe Is Nashville Really?

Crime in Tennessee is rising at such a fast rate that the Governor has issued $100 million for a Violent Crime Intervention Fund.

While Memphis has always had the reputation as the more “dangerous” city in the state, other cities are now in that fold.

The Nashville Police Chief also did some shift and department restructuring to have officers work longer days but shorter work weeks in an effort to get more officers seen by the public.

“The new shift schedule will increase officer visibility in neighborhoods during peak times, enable officers to get to citizen calls more quickly, and, we believe, reduce crime,” Chief John Drake said to the Tennessean newspaper.

Nashville faces a challenge happening in many cities – juveniles getting involved in violent crime at a young age who turn into adults that commit violent crimes.

This can happen in poverty-stricken and disenfranchised communities.

The goal of the police department is a juvenile intervention program to give underage criminals opportunities to choose a different way of life instead of being arrested and released with little accountability.

A few statistics on the general crime in Nashville from 2021:

While many of the tourist places you’ll visit will have petty theft as the biggest risk – things like pickpocketing, car break-ins, someone trying to target a drunk tourist, etc. – you should still be aware of the potential for violent crime as you’ll find in any big city.

The beauty, music, and neon lights of Nashville hide an ugly underbelly, but it’s nothing situational awareness and common sense can’t override.

How Does Nashville Compare?