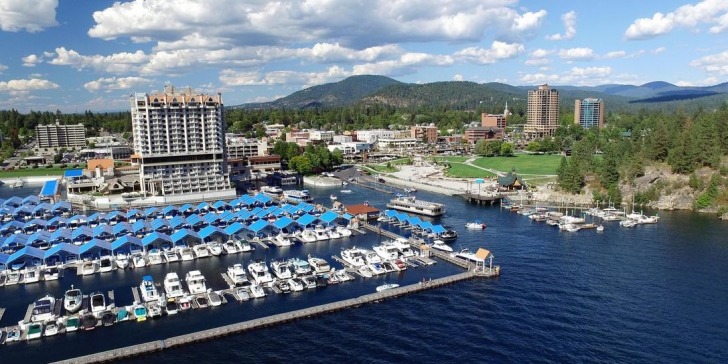 Tucked in the panhandle of northern Idaho, Coeur d’Alene sits on a beautiful lake, surrounded by mountains in an area with a lot to do but doesn’t feel too “touristy”.

Pronounced “Core Dee-lane”, this city is named after the Native American tribe that once inhabited the area and still has a reservation south of the area.

Northern Idaho is a series of beautiful cities with small-town charm up and down every highway you find.

There’s an abundance of activities any time of year, from world-class skiing to some of the best lake water you can find for boating and swimming.

The city is only 30 minutes from the larger Spokane, Washington, to the west, and Missoula, Montana is two and half hours southeast.

You’re in a mountain oasis here with friendly locals and tourists from all over the world.

You’ve got the Coeur d’Alene mountains on the east and Lake Couer d’Alene on the south side of the city.

Oh, and did I mention the casino?

You don’t even have to pick between Idaho or Las Vegas with the casino action here.

When researching the city, you’ll find references to CDA, which is how many locals refer to it in writing or verbally.

There's a low risk in Coeur d'Alene, especially when you consider the sheer amount of things to do. We'll go through some of the risks, but there's nothing that would stop you from booking a trip today.

There are local rides offered on-demand by Citylink. You can call 1-877-941-RIDE to get more information. It is especially helpful to get to the casino, which is outside of CDA. Taxis are also available. It really helps to have your own car here and rental cars are available. All options are low-risk.

There's a low risk here with no pickpockets reported in 2020. I've lived in this area before and explored it extensively. The only concern I would caution is that you end up carrying more than you want because of all the outdoor activities and it's easy to set down a bag and get in the water or leave a purse on the ground at the casino. You really have to be diligent here to not be an easy target.

There's a low risk here with wildfires being the biggest concern. There are going to be major winter storms every year, but that's just part of this area and not a disaster in itself. Up in the mountains, there will be avalanche risks if you go off the beaten path. Any wildfire burning nearby will elevate the risk to medium or high.

There's low risk with just eight robberies reported in 2020 and only one was in a public place. You can feel safe from the risk here, but at night it's always smart to stay in well-lit areas and don't wander down streets or into unknown parts of town.

There's a low risk in this part of Idaho. Some white supremacist groups in the area don't really hide their personal opinions or goals. This also isn't too far from the Ruby Ridge standoff in the early 90s either. If there is any terror risk here, it's domestic terrorist groups.

There's a low risk of being scammed, but always be wary of rental scams if you aren't booking through a hotel website. Make sure any condo or rental home is being advertised with the permission of the owner and has a rental license. Never wire cash ahead of time to reserve a rental home.

The only thing that really stands out to me in the crime numbers is the high rate of sexual assaults. There were 66 in 2020 and that's the highest number in a decade. It's also four times the national average. Due to this factor alone, I have to call it a medium risk just to make women painfully aware of this ongoing crime and take all steps to stay safe while visiting.

As of the latest annual water quality report in 2020, the city has no issues with tap water and it meets or exceeds all requirements. You can call (208)769-1422 for more information.

There is just so much to do in Coeur d’Alene and the surrounding area that it’s hard to sum it all up in one article.

We’ll break it down by activity location.

On Lake Coeur d’Alene you can rent a boat, go fishing, or take a boat cruise.

There are SUPs and kayaks for rent and plenty of nestled locations along the shoreline to get away from the crowds.

Just be sure to avoid private property along the lake.

Sanders Beach is a popular spot for sunbathing and swimming.

Other outdoor indulgences include rafting down a river with trips that run for a few hours or a couple of days.

You can ski at one of a handful of resorts like Schweitzer and Mt Spokane to the north and Lookout Pass to the east.

In Downtown CDA you can walk around the cute shops and restaurants or take a stroll by the water on Front Street.

There’s also a carousel and park near the water.

The restaurants there range from quick burgers to fancy steak dinners.

The Coeur d’Alene resort generally has entertainment booked throughout the year and there’s a really cool boat ride of Christmas lights in December.

The Coeur d’Alene Casino is about 30 minutes south of the city in its own remote area on the Indian Reservation.

There is a hotel, plenty of restaurants, and slot/table games.

For those who prefer a game of golf, you have plenty of public golf courses all over the region and surrounding region.

Places to Avoid in Coeur d’Alene

What’s really interesting about CDA is the highest crime rates are not in the busy downtown area or along the water.

It’s just north of that area.

Harrison Avenue to Katheeln Avenue from north to south and Government Way and Ramsey Road form the east and west boundaries from the higher crime areas.

That said, there isn’t a bad part of town to avoid.

There just are some areas that might be sketchy.

The neighborhoods around the area aren’t well lit, so it can feel ominous driving down some of the streets at night.

This isn’t a very diverse area with 86% of the population being Caucasian.

There is a healthy Native American influence on the area, but other than that you won’t find a lot of multi-cultural events.

Speaking of events, this was my one pet peeve about CDA when I lived there.

If the marathon is happening, or it’s Ironman weekend, or any other BIG event, the whole city shuts down.

Parking is hard to find and once you’re at the event you are stuck there unless you want to sit in traffic or go the long way around.

Check the event calendar during your visit to see if there’s a big event happening the weekend you plan to visit.

Don’t ask the average person about white supremacists in the area.

Everyone knows there are very few people who are involved with those types of organizations and it doesn’t reflect Idahoans as a whole.

Also, don’t ask where the potatoes are.

That annoys people in Idaho too.

So... How Safe Is Coeur d’Alene Really?

The areas where tourists are encouraged and excited to visit are relatively safe.

Many of the crimes that happen in this area are domestic in nature.

Here’s how the risk breaks down by the numbers:

Looking a bit closer at those numbers I can tell you 40% of the thefts were car break-ins, so be extra cautious about locking the car, rolling up windows, and leaving nothing in plain sight.

That goes for even at the ski resorts.

66% of the violent crimes happened in private homes.

19% of the crimes were against strangers.

That means locals are more likely to be involved in a violent crime than a tourist.

There are natural hazards as well like the wildlife in the area.

You can see bears, moose, wolves, and a plethora of other animals.

Most people are surprised at how dangerous a moose can be.

If you ever see a moose with head down and ears back it means:

They are not the docile creatures you think they are.

How Does Coeur d’Alene Compare?