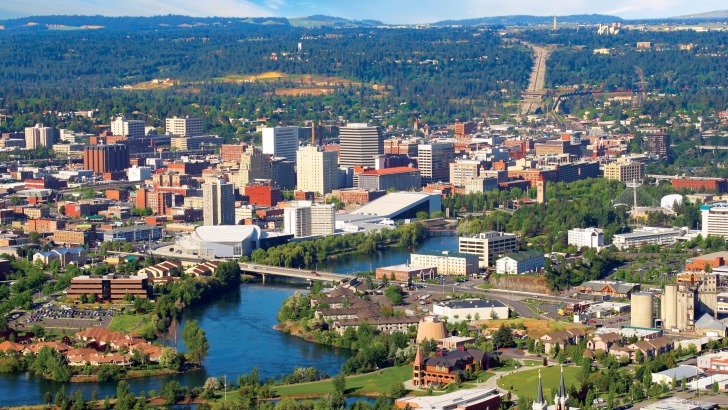 You’ll find Spokane tucked along the Spokane River in the mountains of eastern Washington state.

It earns the nickname Hooptown USA for the massive 3-on-3 baseball tournament held here every summer, and you might also hear it called the Lilac City with a festival to welcome spring after each brutal winter.

You might not have heard that Spokane is near some impressive ski resorts and has a growing downtown entertainment district that is fun for all ages.

I lived in Spokane for a short time, and it was truly a city that surprised me in many ways.

It still has that small-town feel but with some world-class amenities, and a beautiful urban river green space at Riverfront Park, mixed with wonderful shopping and restaurants.

Do you know who else lived here, which I’ll admit is much more impressive?

The crooner’s childhood home and a theater bearing his name still stand so people can celebrate his musical contributions.

The river splits the city horizontally, and the downtown is built near its banks.

If you’re looking for hotels, I can’t recommend the historic Davenport Hotel enough.

It’s truly a piece of history restored to its original glory, and it’s a bonus if you get to see it during the holiday season.

To give you an idea of how big the state of Washington is, it will take you five hours to drive to Seattle on the other side of the state, and that’s hoping there aren’t any winter delays over Snoqualmie Pass.

Spokane is the biggest city for hundreds of miles, bringing people in from across eastern Washington and northern Idaho.

Spokane has a medium risk, but it's getting close to low risk. Crime is very focused on certain areas, but those areas are more likely to be where tourists are. Crime rates have been decreasing since 2018, but they're still well above the national average in the most critical categories. Spokane's safety is really dependent on how used you are to a busy downtown area with its fair share of crime. There's also one simple thing that could drastically lower property crime rates. However, I'm not giving away that answer just yet - stay tuned!

If you are going to be downtown and won't leave that area, you can get by without a car and take a taxi or rideshare from the airport. If you want to travel the region, I'd recommend getting a car rather than relying on the Spokane Transit Authority buses. Be prepared for winter driving conditions starting as early as October and as late as May.

There's a low risk here, with just four reported in 2021. While the downtown is bustling day and night, it's not so crowded that you will keep getting bumped into - but that doesn't give you permission to let your guard down.

Spokane faces winter weather risks of heavy snowfall, blizzards, and ice storms - sometimes back-to-back storms. Wildfires are a risk in Washington, especially on this side of the state, which has a high desert climate. Severe thunderstorms happen, and tornadoes are possible, but this area isn't known for its severe weather at all.

The robbery rate is 30% above the national average, with just 30% of those happening in public outdoor spaces (like sidewalks) and 43% of all robberies happening in homes. There's a low risk for a tourist, but the homeless people downtown can be somewhat aggressive and make you feel uncomfortable.

There's a low risk here. Even though it's a medium-sized city with a nearby military base, it's just too remote. The only terrorism concerns in this region come from homegrown terrorists known to be in the North Idaho area.

You don't have to worry about tourist scams here, but if you're looking for a mountain rental, be sure to use a local travel agency. Rental scams are happening nationwide in resort destinations. The scammers will post an ad after stealing pictures of a home, demand payment upfront, and then disappear. The tourists don't know until they arrive that they have no place to stay and no way to get a refund.

Statistics show the violent crime risk between women and men is equal. While the sexual assault rate is more than twice the national average, other factors indicate that the spike is due to domestic situations.

The water here is safe to drink and use for bathing, with full compliance noted in the 2021 Annual Water Quality Report. More than 2,000 samples were performed in 2021 to keep clean water flowing. Visit SpokaneWater.org if you want to learn more about where the drinking water comes from in this area.

Safest Places to Visit in Spokane

VisitSpokane.com is the official tourism website for the city.

You can choose to personalize your experience to find activities geared toward your trip purpose – business, solo traveler, family, business trip, etc.

For those who want to explore the Idaho side, use VisitNorthIdaho.com to get official tourism bureau information.

Spokane Falls at downtown Riverfront Park is a perfect place to start your adventure.

This area offers many ways to enjoy the waterfalls.

Keep in mind that the falls are active based on the snow runoff, so May is the optimal time to see them in full force.

That said, there’s something to be said about frozen falls in the winter.

There are several viewing stations on both sides of the river, with a gondola ride that goes over the falls on a 20-minute ride, and you can walk on (okay, over) the falls via several pedestrian bridges where the mist hits you when the falls are raging.

If you’re looking for a great place to view the falls during a meal, try Clinkerdagger.

The food is amazing the views are unparalleled.

The Mobius Discovery Center is right by the park.

This science center explores each child’s imagination with hands-on exhibits that inspire learning.

What was once two attractions merged into this one bigger attraction, so it has a science center and museum feel.

On the south side of the river, you’ll find River Park Square, a dynamic shopping mall that’s several stories tall and includes some of the top names in fashion.

The shopping and entertainment district expands south and east of the mall.

Spokane is home to Gonzaga University, so you’ll get a college-town feel when you see all the bars and restaurants in this part of the city.

If you’re visiting Gonzaga, be sure to visit the Bing Crosby House Museum.

Crosby was born and raised here and even attended Gonzaga before singing and dancing his way into millions of hearts.

The museum is free and open to the public.

Wander Spokane offers walking tours where you can learn about the city’s history (did I mention it burned down in the late 1880s?) and visit some of the hottest bars and restaurants.

The Blue Zoo is an aquarium and zoo mixed into one great place full of family-friendly fun.

It’s consistently ranked as one of the top places to see in the city.

If you’d rather walk the jungle than the shoreline, visit Cat Tales Wildlife Center, where you can get closer than 10 feet to some of the most powerful animals on earth.

If you visit the South Hill neighborhood, be sure to visit Manito Park.

It’s a large park with a lake and very friendly birds, but don’t feed them.

Even when you see everyone else feeding them.

The city has been trying to stop that bad habit for years.

A bird fed too much can become too fat to fly, putting the whole flock at risk.

The migration of birds here also makes the water too dirty to swim in because the ducks eat and then relieve themselves in the water.

For those who want to ski, you have several options within driving distance:

Keep in mind those ski resorts are across three states.

Idaho, Montana, and Washington all have ski destinations.

Mount Spokane is the closest but also among the most crowded.

The ski season goes well into the spring here.

Places to Avoid in Spokane

The downtown area has its fair share of crime, mostly petty thefts and conflicts between people who know each other, but the north side of the city is definitely the more dangerous end of town.

The south side, known as South Hill, is very residential.

That’s where I lived.

The only downside about Spokane is that outside downtown, there isn’t much to do unless you visit friends and family in different neighborhoods.

You have several historic districts near downtown, but outside of that area, there’s not much to do unless you like community parks, like Manito, and hiking trails.

Avoid trying to find a hotel outside the downtown region or not along the major I-90 interstate.

All the hotels are grouped in one place or along the popular travel route.

There are still plenty of places to stay, but you won’t be in the residential areas.

On the north side of I-90 at Thor Road, there’s a massive homeless population in an area known as Camp Hope.

The area isn’t a busy section of town, and you’ll likely have no reason to be there.

In any case, avoid that area.

You won’t be able to avoid the winter cold in Spokane, but it doesn’t stop the locals from enjoying time outside.

There are ice rinks and sledding hills with outdoor activities.

Even the ski resorts are still busy when the temperature or wind chills drop below 0°(F).

You’ll need to be bundled up in layers and have accessories to cover your extremities.

Safety Tips for Traveling to Spokane

So... How Safe Is Spokane Really?

The statistics are quite shocking for a city that felt so safe when I lived there.

Property crimes are off the charts, fueled by those car break-ins and vehicle thefts. In 2022, many of the violent crimes were surging from 2021 levels, but that data isn’t official as of this publication.

The concern about the law change that prevented more police chases is that criminals now appear to be taking advantage of that strategy.

“The criminal knows that we can’t pursue them, and even if we could pursue them, it’s not a crime that we’re allowed to pursue anymore,” Spokane County Sheriff Ozzie Knezovich told KREM2 News in Spokane.

On top of that, there’s a staffing problem at the Spokane Police Department.

According to police chief Craig Meidl, “We are losing officers right now faster than we can hire them.”

Until the city, county, and legislative bodies can address the restrictions and challenges, Spokane’s crime problem might continue to increase.

However, it’s nowhere near as dangerous as a place like Detroit or Chicago, which is why some people will scoff at the high crime rates.

It’s also worth noting that crimes were down from a much more dangerous 2018.

With just 32% of violent crimes happening against strangers, visitors can feel safe visiting here but now have a better lay of the land and know where the most vulnerable points are in the city.

How Does Spokane Compare?