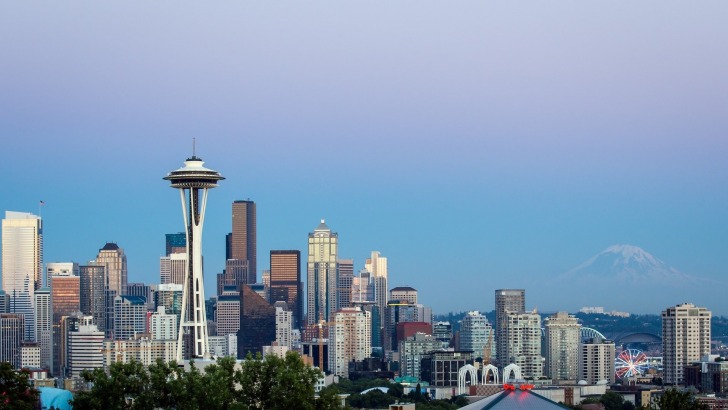 Can’t decide if you want to go to a place with a shoreline, mountains, or forests?

Why not visit Seattle, Washington, where you can have it all?

Tourists must be okay with traveling on the water if they want to enjoy the full scope of the region, as ferries are almost as common as taxis here.

The Space Needle stands as the city’s focal point and signature asset, with a progressive and eco-responsible population of more than 700,000 people underneath it.

Seattle pays a large amount of respect to the Native Americans that first inhabited this land, with the tourism website even offering this message among all the modern attractions, “The city of Seattle resides on the traditional land of the coast Salish peoples, past and present.

We honor with gratitude our shared land and waterways, as well as the history and heritage of our indigenous neighbors.”

The Emerald City, as Seattle is often referred to, is also home to more than half a dozen Fortune 500 companies.

Travelers might care to know that this is the home of Alaska Airlines, which might offer more international flight opportunities.

Seattle is also a major port for Alaska cruises.

Seattle is also rich in music, art, and performance cultures, one being the grunge capital of America when that style was popular.

I cannot tell you how much I have loved researching safety in Seattle.

This city – more so than any other city of the hundreds I’ve researched – makes data and safety information so easy to find and digest.

When the biggest safety concern in a city is the unknown, Seattle really gets ahead of it in every way possible.

There's a medium risk in Seattle, yet it's not among the most dangerous cities in America. Since this is a large area with increasing gun violence, it's worth adding a bit of extra caution. That said, there's no reason to reconsider a trip because of the crime rates.

NOT using a car is very popular in Seattle to reduce emissions, and there's a robust system to get you anywhere you'd like to go. Using the Transit GO Ticket app, you can purchase tickets for ferries, light rails, buses, and streetcars. The Seattle monorail is another popular option that is ideal for tourists as it goes between the more popular parts of the region. Taxis and rideshares are also available. All options come with low risk, but use standard safety procedures when using public transportation.

Of nearly 27,000 thefts in Seattle in 2021, just 104 of those were pickpockets. I even checked the Port of Seattle data with just 4 pickpockets there. Even while using the transportation system, the biggest safety concern is drug use, not pickpockets. While this is technically a low risk - treat it with a medium risk to keep those numbers low.

On the city's Emergency Management page, you can use the Seattle Hazard Explorer interactive map - in English and Spanish - to see the biggest natural disaster risks in the place you'll visit and stay. The potential incidents include earthquakes, tsunamis, liquefaction, landslides, flooding, and even climate change.

The robbery rate is three times the national average, so treat that with a medium risk. While just 26% of those are in the category most likely to be against tourists, a total of 51% happen in public places and businesses.

The port, population, and prominent business and military presence will require us to consider Seattle a medium risk. It's also a socially conscious city known for protests that could trigger acts of extremism. A city document states, "The terrorist threat in Seattle comes from multiple sources. Al Qaeda and related jihadism, the extreme right, and radical environmentalism have been the most frequent causes." A robust emergency management plan is in place should the worst happen, but there's an elevated level of security you'll see on the streets and some that you'll never know are happening behind the scenes.

I went to local social media pages to get an answer about this, as law enforcement lists the standard scams that impact every city. The overwhelming message is "Don't stop and talk to anyone." Whether it's someone trying to force their latest music CD into your hands, then demanding payment, or a social activist pressuring you to sign a petition, many people are looking to get your attention. Say not and confidently walk away.

Statistically speaking, women have a 37% chance of being victims of violent crime, making men much more vulnerable. The sexual assault rate is one category below the national average. You'll still need to use caution when enjoying the nightlife or walking around at night, but it's nothing more than basic personal safety steps.

Seattle Public Utilities has some of the best-tasting and cleanest water in America. The utility also explains on its website why drinking tap water is better than drinking bottled water. The 2021 Water Quality Report backs up these statements with full compliance all federal and local standards. You can call (206)615-0827 if you have water quality questions closer to your visit.

Safest Places to Visit in Seattle

We like to point out the tourism sites backed by visitor and convention bureaus because it means you can feel safe using a secure website with little to no risk of being scammed or getting viruses on your devices.

You can also check out Visit Seattle TV if you prefer to learn about a city through videos instead of reading.

Seattle has 21 neighborhoods to explore, so we’ll be unable to dive deeply into each one here.

We will talk about some of the biggest and safest places to see.

Of course, everyone wants to see the view from the Seattle Space Needle, built in 1962 for the World’s Fair.

Standing more than 600 feet in the sky, you can get some great views on a clear day with an elevator ride up that takes less than a minute.

Smith Tower and the Sky View Observatory at Columbia Center are two other locations with dynamic views.

If you’re traveling with kids, you have some great options to explore indoors.

The Seattle Aquarium is full of sea life from Puget Sound and beyond, plus several performances are put on each day for the crowds.

The Pacific Science Center is an exploration of imagination and innovation, complete with two IMAX theaters and a planetarium.

The Seattle Pinball Museum is another show-stopper for all members of the family.

You can explore the waterways around Seattle through ferry trips to Bainbridge Island or Bremerton or rent a kayak/SUP for chartering your own route.

A 19th-century schooner known as Seattle’s Tall Ship does tours seasonally that gets you a little slice of everything in the Pacific Northwest environment.

Tours are available from the sky on a hot air balloon, floatplane, or helicopter, with different lengths and adventures included in each one.

Food, wine, and nightlife tours are also available, which is a safe way to explore different areas in the comfort of a large group with a local leading the way.

For those of you coming to Seattle for a cruise, the tourism website has a section called “Pre & Post Cruise Activities” you can explore to make the most of your time.

There are communities here with cultural and historical experiences for the first peoples, Asians, Scandinavian, Latino, and African American influences.

A city this rich in culture has far too many to list individually, but each neighborhood and culture is detailed on that tourism website.

Of course, first-timers shouldn’t miss Pike Place Market, where the bounty of the Pacific Northwest is on full display with fresh fish, flowers, and farm-to-table food.

Keep a tight grip on your purse or wallet here, as more than 10 million people visit this market every year.

When you see Rachel the Piggy Bank, get an Instagram shot, but drop some spare change in to help a local charity.

This is also where the original Starbucks is located, but with so many non-corporate coffee shops here, it might be better to try a local shop.

Places to Avoid in Seattle

In the 2021 Seattle Police Department 2021 Crime Report, the city offers a “heat map” of the top spots for gun crime in the city.

Of course, those numbers were escalating in 2022, but it gives a great look at the more violent neighborhoods in the city.

One major hot spot is near the Chinatown International District.

Another hot spot is south of I-90 and east of I-5, with a higher penetration just east of the King County International Airport (not to be confused with SEATAC, the major commercial airport).

In the Sodo neighborhoods, residents expressed the highest fear of crime, according to a Seattle University study in 2022.

The Alki neighborhood saw violent crimes double between 2020 and 2021.

While downtown Seattle is one of the higher crime neighborhoods, it also has more people.

Any downtown area worth visiting will have increased crime rates because there are more things to do there.

Seattle Police want to get ahead of your concerns in different areas by publishing a whole website section called “Visitor Safety Tips.”

Safety Tips for Traveling to Seattle

So... How Safe Is Seattle Really?

Now some of that is explained away by the COVID restrictions loosening and more people being out.

At face value, that sounds rather intimidating.

However, it’s a surge many cities are seeing in America as drug crimes and illegal guns wreak havoc in some communities.

This is just a sample of the information you can get from the SPD 2021 Crime Report.

All that said, a community survey showed just 43% of people were fearful of crime.

This is based in part to improved community relations between citizens and law enforcement.

“Much of the fear of crime is just a perception of how safe people feel about their environment,” said Jacqueline Helfgott, Director of Seattle University’s Crime & Justice Research Center, “and there’s definitely research to support that the more social cohesion there is for people in a community, the more they feel they have some control over what’s happening to them, and the more that decreases fear of crime.”

Considering all that, the city is still not in the top 100 most dangerous cities in America.

A tourist must use street smarts, common sense, and situational awareness.

With 53% of all thefts related to car break-ins, you can easily reduce your risk by using public transportation or locking your car without leaving personal items inside.

With only 17% of violent crimes happening against strangers, there’s a good chance you won’t notice any of the crime happening aside from an occasional panhandler.

However, 75% of violent crime happens outside of public homes, so if you stay out of dangerous neighborhoods and avoid any tense situation, you should be able to exponentially lower the existing risk.

How Does Seattle Compare?