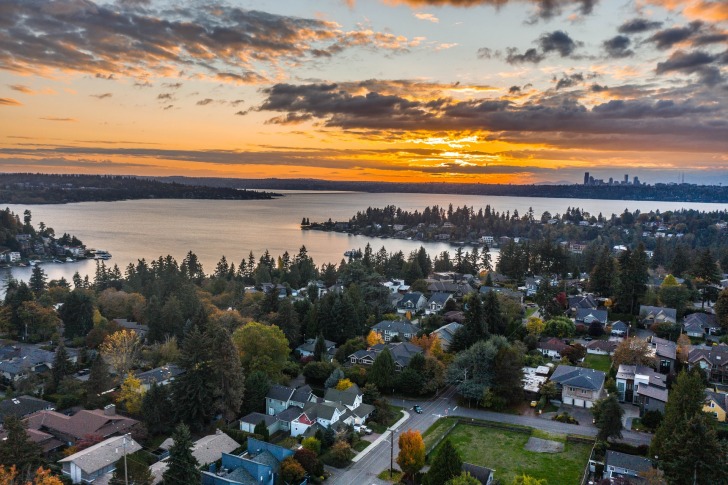 If you are considering traveling in the United States, you must make a stop in the state of Washington.

The state sits in the extreme northwest corner of the contiguous United States and has just about everything you would want as a traveler.

This includes arid plains in the East, rugged mountains down the center, a beautiful coastline, and one of the most culturally rich cities in the United States in Seattle.

Washington is a very popular state for travelers both domestically and internationally.

It’s also popular because it’s close to the southwest corner of Canada, a beautiful area in its own right that features the great city of Vancouver.

Some of the best camping and sightseeing in the world exist in Washington.

The city of Seattle is also a popular destination because of its cultural landmarks, like the Space Needle and some of the great Asian food.

Seattle has the biggest Asian populace in the United States of America.

Outside of normal crime concerns found in any area, there is no real reason to be concerned about your safety while you are in the state of Washington. The crime rate is very low, except for a few areas. You are probably in more danger of hurting yourself on some of the rugged terrains the state offers, but even that isn't dangerous unless you are being careless.

As long as you use reputable companies that have some accountability, you should have zero issues using a taxi or public transportation while you are in Washington. Don't get rides from unmarked cars or people that are soliciting rides from you. Sticking to rideshare apps should help with this.

Pickpocketing is not a common crime at all in Washington. You have a better chance of getting robbed as a resident via a break-in. The only way you put yourself in danger of getting pickpocketed is if you make your wallet or purse very easy to steal. Don't walk around with your wallet in your back pocket, for example.

Muggings are more prevalent than things like being pickpocketed or other property crimes, but there is no real danger of being mugged unless you are being extremely careless. Avoid bad neighborhoods in bigger cities and never walk around alone at night and you will avoid being mugged.

The United States is very safe when it comes to international terror incidents. There is a small chance that you could be in the middle of a domestic terror incident, but that is so rare that it is not even worth considering when you book your trip. You can travel freely in Washington without any real threat of being in a terrorist attack.

There is some risk of being scammed while you are on vacation. International tourists are considered a target by would-be scammers. Most of these scams take place online while you are booking. Don't use shady third-party websites to book your travel. There are a couple of scams to look out for in tourist areas too, so familiarize yourself with them before you go on your trip.

The risk for women traveling is more than men, but it is still overall very safe for women to travel in Washington as long as you practice basic safety precautions. Women should stick with their group or move in pairs to avoid becoming a target for attackers.

Washington has some of the cleanest drinking water in the United States, according to the FDA. You should feel zero trepidation when drinking tap water in the state. You may carry your filtered water with you if you like, but it is not a necessity.

Safest Places to Visit in Washington

Much of Washington is extremely safe to visit, so it’s hard to pick one place.

The safest places for tourists are the rural areas.

If you want to visit places with almost zero worries of crime while you are there, stick to national parks like Olympia National Park.

They are heavily monitored and are not known to attract criminals or vagrants.

There are some very safe cities in the state too.

One example is Sammamish, a suburb of Seattle in King County.

If you want optimal safety while you are staying near Seattle, consider booking a hotel here.

It has the lowest crime rate in the state and still gives you great access to downtown Seattle and all the features it has to offer.

Bainbridge Island is another area in the state with an extremely low crime rate.

The crime rate in these places is so low it’s almost non-existent.

Placess to Avoid in Washington

Washington is mostly a safe state for travelers, but there are some places to avoid.

Some of the worst neighborhoods in the state are in the most-populated city in the state, Seattle.

There are also some dangerous neighborhoods in Spokane.

The good thing about this is these areas are not typically placed you would even consider going if you are a tourist in the state.

Spokane is in the eastern part of the state and is home to Gonzaga University, but it has had issues in recent years with homelessness and drug addiction, so be careful if you are checking out downtown Spokane.

A great way to avoid bad neighborhoods in these cities is to do a simple Google search before you go.

This search can tell you some of the places around Washington to avoid while you are there to stay as safe as possible.

Be sure you don’t book your hotel in these areas either.

Safety Tips for Traveling to Washington

So... How Safe Is Washington Really?

Overall, Washington is a very safe state for both domestic and international travelers.

It is an area that is used to handle a high volume of tourists, so they have measures in place to keep you safe.

The people there are also used to having visitors around, so they are friendly and helpful to those that choose to come there and spend money.

Like anywhere else in the world, there are some areas of Washington you want to avoid to be as safe as possible.

These are mostly rougher areas in cities like Seattle, Yakima, Olympia, and Spokane with higher crime rates.

These neighborhoods are almost all residential areas that a tourist wouldn’t be interested in anyway.

Overall, Washington is in the bottom 20 states in the US when it comes to violent crime.

This is impressive considering some of the bigger city centers it has compared to other states with a higher crime rate.

How Does Washington Compare?