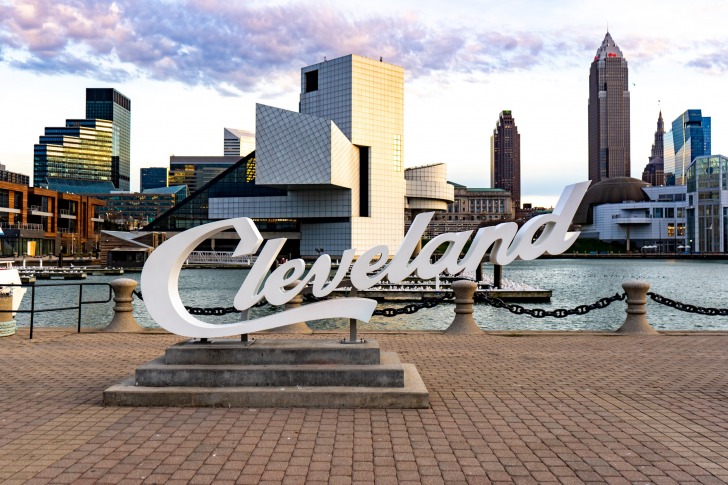 Ohio is one of the most interesting states in the United States of America for travelers.

This is because Ohio has such a wide variety of things to offer.

It has three big cities, rich rolling wooded hills in the southeast, and beautiful lakes and flatlands in the northern part of the state.

If you are a sports fan, there is no shortage of things to do while you travel in Ohio.

One unique natural feature in the state is the caves in the southeastern part of the state.

These caverns attract people from all over the globe who like to explore the underground.

You can experience just about everything the United States has to offer without leaving the state of Ohio.

Overall, Ohio is one of the safest states in the Union. Even though it has three major city centers, Ohio is still in the bottom half of the country when it comes to its violent crime rate. As long as you avoid some of the more dangerous neighborhoods in Cincinnati, Cleveland, and Columbus, you shouldn't have any issues while you are there.

The rate of violent crime when taking a taxi or another transport company is very low in Ohio. To stay safe, make sure you only use reputable companies with a good track record. One way to do this is to schedule rides ahead of time or rent a car.

There is almost zero risk of being pickpocketed while you are traveling in Ohio. Robberies of tourists are very rare. To avoid having your wallet or purse stolen off of you, avoid congested areas in big cities. Outside of the bigger cities, there is almost no record of pickpocketing.

Ohio is in tornado alley, especially in the western part of the state. This means there is some chance that you could be in a tornado if you visit during tornado season (April through September). The good news is most tornadoes aren't serious and pose no real threat. They are also very rare, even if they happen in Ohio more than in other states. The only other natural disaster risk in Ohio is flash flooding in some lowland areas.

Mugging is not a common crime in the state of Ohio like it may be in New York City or other urban areas in the United States. The crime only happens in some of the worst neighborhoods in big cities in the state.

There has never been an international terror incident in Ohio in recorded history. There is some chance that you could be in the area during a domestic attack of some kind, but that is extremely rare as well. Rare enough that you could even say it just doesn't happen. You shouldn't worry about terrorism at all while you are traveling in Ohio.

Most scams in Ohio are not going to happen person-to-person. Your best chance of getting scammed when traveling in Ohio is going to happen online before you book. Don't give your credit card number or personal information to websites that seem untrustworthy. Trust your instincts with your pertinent information.

While it is less safe for women to travel than men anywhere in the world, the risk is still relatively low for women while they travel in Ohio. As long as you are vigilant and don't go into dark or dangerous areas at night alone, you shouldn't have any issues while you are there. The biggest risk to women in Ohio is violent crime or robbery.

The water all over the state of Ohio has been classified as safe to drink by the FDA. The entire state uses modern filtration methods and other safety precautions to make sure the water is good. You won't have to travel with your water supply at all while you are there.

Safest Places to Visit in Ohio

If you want to stay as safe as possible while traveling in Ohio, be sure to only travel in the rural areas.

This is good news if you are someone who likes to enjoy the outdoors while traveling.

The crime rate in state and national parks around the state is extremely low to the point of almost being nonexistent.

The only areas with any real crime rate in the state of Ohio are Cleveland, Columbus, Cincinnati, and some other bigger cities like Toledo.

Even these areas are safe if you stick to the areas designed for tourists.

A simple Google search before you go will tell you what areas to avoid, helping you not book a hotel in a bad part of town just to save a little money.

Overall, these cities are still safe compared to other cities in Asia, South America, and Europe.

Placess to Avoid in Ohio

When you are traveling in Ohio, there are some places you want to avoid.

One smaller city in the southwestern part of the state that makes this list is Dayton.

The city has seen some economic issues lately, leading to a rise in crime and drug use.

It’s not a part of the state that is popular with tourists anyways.

On top of Dayton, other cities on the high end when it comes to crime rates are Canton, Chillicothe, and other inner-city neighborhoods in Cleveland, Cincinnati, and Columbus.

As long as you do your research ahead of time and don’t wander into areas you are unsure of, you should have zero issues with a crime while you are in Ohio.

Safety Tips for Traveling to Ohio

So... How Safe Is Ohio Really?

All in all, Ohio is one of the safest places you can travel in the United States.

It has a crime rate in the bottom half of the country despite having three of the biggest cities in the country.

The people there are generally known as friendly and helpful people who still stop to help you with anything if you have an issue.

This doesn’t mean that you can be careless while you are in Ohio.

This is especially true if you are in some of the bigger cities, like Cleveland.

The dangers in Ohio are about the same as any of the safer places in the rest of the country.

The crime rates in the big cities are only bad in some of the worst neighborhoods in the cities.

You can generally feel pretty safe if you are in the areas designed for tourists to have a good time.

One thing you have to be worried about while you are in Ohio is the weather.

If you don’t like cold weather, avoid going in the winter.

The opposite is true if you don’t enjoy hot and humid weather.

The key to having a safe and good time while you are in Ohio is to plan and know what you are getting into.

How Does Ohio Compare?