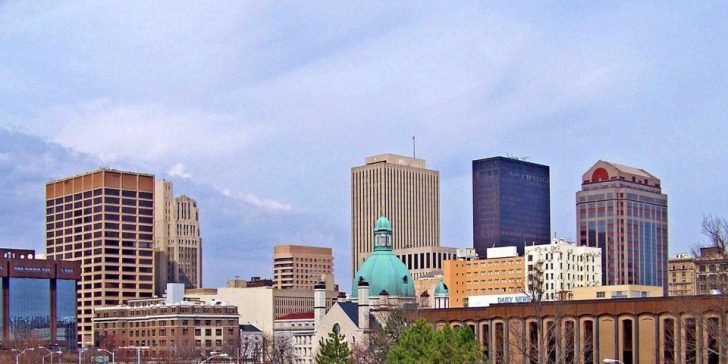 Dayton, Ohio, is known as the Gem City, but it’s the aviation history that will really get your attention.

Known as the Birthplace of Flight, many attractions here are designed around this milestone, which doesn’t always get the global recognition it deserves.

Dayton is tucked into Central Ohio, about an hour north of Cincinnati.

It’s a city of fewer than 140,000 people, and that’s as proud of its local park system as it is the technology business sector.

It’s also pretty cool when you can find an island in a landlocked city.

The Miami River runs through Dayton and provides ongoing activities and entertainment throughout the year.

Basketball might be bringing you to Dayton, as no other city has hosted as many NCAA tournaments at its home arena.

Marketing pushes for THE ROAD STARTS HERE, and the NCAA FIRST FOUR kicks off March Madness every year.

The traditional friendliness of the community has twice been shattered by mass shootings, one in 2019 and another in 2022.

Dayton is one of many cities dealing with increased crime rates, and juveniles are being arrested in record numbers for violent or gun crimes.

Dayton has a medium overall risk with ongoing violent crime issues and record-breaking homicide rates. While many crimes are among people who know each other, it's important for a tourist to realize this isn't an idyllic Midwestern city in every way.

Dayton's public transportation service is the RTA. Tapp Pay is the app riders can use to check schedules, track buses, and pay for fares. Taxis and rideshares are readily available, and rental cars are another option. There was a high-profile shooting on an RTA bus in 2022, but crime on the bus isn't commonplace. There's low risk with any option, but having your own car is better to explore on your own schedule.

50 pickpockets and purse snatchings were reported in 2020, which is a large amount for a city of this size. We'll call it a medium risk so that you can be more attentive to what you bring out in public and how secure you keep your wallet.

Ohio gets flooding and tornadoes all too frequently, with a major tornado outbreak happening as recently as May of 2019. You need to know severe weather safety here. Winter visitors should also review the snow emergency plan. There's a medium risk because dangerous weather potential runs all year long.

Robbery has been on a steady decrease in Dayton since 2014, when there were nearly 800 robberies, while 2020 saw 300. It's still a medium risk for tourists, however, since that rate is nearly three times the national average.

Aside from during the NCAA tournament, there's a low risk here. Nearby Cincinnati would be a larger target for terrorists. You should still report any suspicious activity to the local police.

The biggest scam lately has been someone spoofing the police department's phone number and threatening arrest if people didn't pay money. That was targeted at locals, so there's a low risk for a tourist.

Women have as much of a risk as anyone else, so that's a medium risk, but use extra caution when enjoying the nightlife, and don't go to a private place with someone you just met. Avoid walking around at night alone and if you are going to a park or on the river, just let someone know where you are going and when you plan to be back.

The water utility was fully compliant, as detailed in the 2021 Water Quality Report. If there is flooding during your visit, check the city website for any water quality risks. Floods can cause contamination or flow issues that require boil orders.

Safest Places to Visit in Dayton

There is also a Visit Dayton app produced by the tourism bureau.

This will help you find places that are among the best in the region.

Take the Dayton Aviation Trail by printing the brochure on the tourism website.

There are 17 sites to see and to “win” the trail challenge, you just need to visit eight.

Some of the most popular are located in the Dayton Aviation Heritage National Historical Park.

The National Museum of the U.S. Air Force is the largest aviation museum in the country, with a storied history and 19 acres of space to explore.

For another interactive experience, you’ll love the Boonshoft Museum of Discovery, with science, anthropology, and paleontology taking center stage.

The Discovery Zoo is also located here, with a chance to get up close to all kinds of animals.

Exhibits change throughout the year to reflect ongoing challenges.

You can also head to Hollywood Gaming at Dayton Raceway to try your luck on horse races or slot machines (known as video lottery terminals).

The Oregon District is a great place to visit any time of day, but it has some of the best nightlife available in Dayton.

You’ll love a stroll down 5th Street, where you can check out the schedule for several entertainment venues.

Five Rivers Metroparks is an expansive park system in the region, and Island Metro Park is one of the most popular during the warmer months.

Every park offers fishing, but the island park also has kayaking and rowing.

There’s also a pedestrian bridge over the Great Miami River.

Places to Avoid in Dayton

Staying east and south of the river will keep you in the lowest crime neighborhoods.

Oakwood is one of the safest communities in the city and also one of the most affluent.

The area around the university is also one of the safer places, as there are local police and campus police on patrol.

If you are visiting and find out about a natural disaster, such as a tornado hit, you should reconsider your travel plans.

The 2019 tornado outbreak saw 15 tornadoes in Dayton, including one that went right through downtown.

In the aftermath, gas leaks were common, debris was scattered, water was too unsafe to drink, and power was out.

You might not know about the severe weather events unless you track the city’s weather before visiting.

You can get a free weather app from a variety of places, like The Weather Channel or local television stations.

Safety Tips for Traveling to Dayton

So... How Safe Is Dayton Really?

The Ohio Chamber of Commerce is now involved in helping with crime prevention strategies.

After Dayton was ranked among the most dangerous cities in America, community leaders realized it will take a larger effort from the business owners and residents to help lower the numbers.

“It is a very safe city, but do we have some issues that we need to address?

“I think the gun violence that we see, a lot of times we see people who are involved in an argument and instead of trying to deal with it the correct way, they decide to grab a weapon and shoot people or actually shoot innocent people.”

Police are frustrated by rising crime rates and record homicide rates, but even more so since juveniles are contributing substantially to the crime.

Now, there isn’t an inherent risk for a tourist visiting Dayton, but there’s always a risk of being an innocent bystander or being in the wrong place at the wrong time.

The best advice is to stay on main roads and highways while visiting the main tourist attractions and popular districts.

Don’t go wandering into different neighborhoods, and stay on the east side of the river if you can.

How Does Dayton Compare?