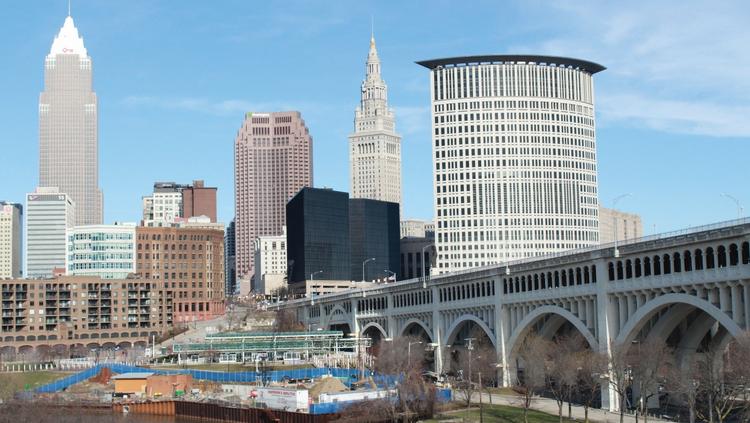 Cleveland, Ohio, sits on the south shore of Lake Erie and is home to a wide array of attractions, most notably the Rock & Roll Hall of Fame.

The city is as rich in culture as it is in history, with distinct neighborhoods where you can feel at home or expand your horizons.

You’ll even find a Christmas gem in the Tremont neighborhood, where the house from A Christmas Story is now a museum.

If that’s not enough of an icon for you, how about visiting Glenville, where Superman was created?

The Cuyahoga (“Kai-uh-HOE-guh”) River weaves through the Cleveland region, giving fantastic views along the highway as the urban cityscape meets the dazzling blue waters of the river and lake.

A trip downtown will bring you into a modern urban core, but the historical architecture will leave you breathless.

Be sure to stop by The Cleveland Arcade.

This shopping Mecca gave birth to the tradition of the American Mall.

You also have access to every major league sports team in this city of 372,000 (the metro area is home to more than two million people).

Clevelanders are also used to ribbing about things like the river catching fire and being nicknamed “The Mistake on the Lake.”

Be nice while visiting, okay?

One of the best Italian meals of my life was enjoyed in Cleveland’s Little Italy.

The Clark-Fulton neighborhood is the epicenter of Hispanic and Latino culture.

Searching for soul food and African American culture in Cleveland?

The Lee-Harvard district is the place to be.

The city and surrounding suburbs have an extensive park system as part of an entity known as the Cleveland Metroparks.

If one of the 18 options isn’t good enough for you, then you are way too hard to please.

Download the app for Metroparks to start plotting your outdoor adventure.

While you don't have to worry about the Cuyahoga River catching fire anymore, you do have to worry about incredibly high crime rates. Cleveland is on the top 10 list of the Most Dangerous Cities. The violent crime rate is four times higher than the national average. There are certain neighborhoods much more dangerous than others, and we'll go through those in a little bit.

The Regional Transit Authority (RTA) has rail, bus, and trolley options to take you around the region. Taxis and rideshares are available everywhere, and rental cars are easy to get. A series of violent crimes on public transportation or at the stations led to the city creating transit ambassadors to monitor passengers and report issues. There are also cameras on every mode of transportation. It's best to avoid public transportation at night.

The actual number of pickpockets reported in 2020 was 36, but the overall theft rate is twice the national average, with a one in 41 risks. You must use caution in crowded spaces and try to put a zipper between your wallet and the outside. It's harder for a pickpocket to sneak open a zipper.

What many people call a natural disaster Cleveland just calls "Winter." The city gets an average of four and a half feet of snow, and when lake effect snow falls it can pile up quickly. Bitterly cold temperatures are a concern in the winter. Spring brings severe thunderstorm risks, and tornadoes can happen here but aren't as common as in the Midwest and South.

There's a high risk here, with the average number of robberies nearly five times higher than the national average, and almost half of those robberies happen in public. Just looking at the data, crooks are more likely to take something from you by force instead of manipulation.

This is a large metro area, and there's a U.S. Department of Defense location downtown. This does make for a higher risk, but it also makes for more security at the port and throughout the city.

While Cleveland has the typical scams of any U.S. city, you might find them to be more likely here, since it's a large city with elevated crime rates. The Cuyahoga County Department of Consumer Affairs actually has a SCAMO bingo car where you can learn about the prevalent scams. If you have questions about scams or need to report a scam, call the county Scam Squad at 216-443-SCAM (7226).

Women are slightly less likely to be crime victims overall, but the sexual assault rate is about two and a half times the national average. Women should travel in groups and avoid walking around at night alone. Use a cab or rideshare instead of public transportation if you are alone during the day.

The 2021 Water Quality Report shows full compliance with required standards, and there are a lot of great details about the steps taken to keep the water safe. Cleveland Water will let the city know when hydrant flushing could impact the color or consistency of the water, so follow them both on social media to get updates.

Safest Places to Visit in Cleveland

With so many things to do, it’s hard to organize your adventures.

The tourism bureau at ThisIsCleveland.com has put together several “Passport” programs to try out some of the top attractions.

The passports are free, and the tours are self-guided.

The Rock & Roll Hall of Fame is a hallmark attraction of Cleveland.

Tours are available with advance purchase of tickets.

The Greater Cleveland Aquarium is another show stopper, as sharks swim over your head and you come face-to-face with some of the deep seas’ biggest predators.

Glow in the dark jellyfish is a popular exhibit, and don’t miss the pool where you can pet a stingray.

The Westside Public Market is a foodie’s dream come true.

Over 100 vendors serve unique Cleveland treats, and you can sample a little bit of everything as you wander around.

This is also a historical site, having been open since 1912.

Baseball fans should sign up for a tour of Historic League Park, the oldest ballpark in the country, and the Baseball Heritage Museum, with a diverse range of leagues and players throughout the decades.

I almost forgot to mention Ralphie’s house from A Christmas Story.

In addition to tours being open throughout the year, you can also reserve a night at the house.

There’s also the Bumpuses house next door, which is open to guests, with the Hound Dog Haven suite or the Stolen Turkey suite.

As I researched winter activities, Google gave me a suggested question: “How do people survive in Cleveland in the winter?”

Of course, you can survive and thrive in a Cleveland winter, but you’ll need to bundle up.

You can go ice fishing, walk the beaches of Lake Erie and see frozen gardens, lighthouses, and waterfalls.

Ice fishing is popular, and there are plenty of tours inside cozy shuttle buses to see the lake in its winter state.

While it’s not Aspen, it’s still a skiing adventure that is fun for all, and you won’t have to pay Aspen prices.

Places to Avoid in Cleveland

Cleveland has five police districts spread throughout the city.

District 3 is known as one of the higher violent crime areas, specifically between downtown and University Circle.

There are also some neighborhoods west of Ohio City to avoid.

If you aren’t slinging drugs or trying to get jumped into a gang, you escape a large part of what triggers violent crime.

However, you should use maximum caution in all that you do in Cleveland and ANY large city.

I can tell you I visited Cleveland twice.

Once alone and another time with a friend, and granted, it was about 20 years ago.

I didn’t have any moments of feeling unsafe as a female traveler, but I also grew up in St. Louis, so I have a certain amount of “street smarts.”

I stayed in my “lane” as a tourist and explored the main streets with minimal personal belongings.

As mentioned above, you don’t have to avoid Cleveland in the winter, but pack for some of the coldest temperatures you can imagine.

A lot of what I can tell you when it comes to travel advice is based on what I did wrong.

I visited Cleveland for a job interview in the winter.

I just had to walk a few blocks from my hotel to the television station.

I lived in Arizona then, so I didn’t have a good coat or hat – but it was just a few blocks away, right?

Lake effect snow had just started, and by the time I got to the station, I had a solid inch of snow on my head, which melted me into a wet, cold, soggy mess.

If you don’t have thick winter gear, there are now places where you can rent it for a trip like this one.

You don’t want to spend $300 on a North Face coat you’ll wear once.

If you do have winter gear, a travel hack is to vacuum pack your coat, gloves, scarves, and gloves, so there’s more room in your luggage.

Safety Tips for Traveling to Cleveland

So... How Safe Is Cleveland Really?

Different perspectives greatly influence the answer to this question.

On one hand, crime data shows the incredible growth of violent crimes.

On the other hand, the mid-2022 report shows a modest decrease in certain crime areas.

Yet, just a month after that report was released, five shootings happened in 13 hours across the city, leaving three people dead and five more injured.

“The City of Cleveland and urban areas across the United States have been severely affected by skyrocketing violent crime statistics, including shootings and homicides.

While many of the cases can be traced to incidents of drug and gang activity, the exact cause of the drastic increase is unknown.”

That was a joint statement issued to Cleveland’s local media from the mayor and police chief.

On top of that, the city is short nearly 300 police officers, another harsh reality facing police forces across the country.

There’s a gap between community relations and the police, and several new programs are hoping to lessen the gap.

Many people will comment, “It’s a big city.. there’s crime everywhere.. if you don’t go looking for trouble, you won’t find it…” All of those statements are true, but what else is true?

The overall crime risks in Cleveland with some shocking risk rates.

In 2020, 30% of violent crimes happened against strangers.

47% of robberies were in public places.

Many of the neighborhoods tourists are most likely to visit are among the lower crime rates.

One of the best tools you’ll have access to this is the concierge at your hotel.

If you don’t have someone there who can help, call the police force district where you are staying and ask them about safety.

Cleveland is too much of a fun city to avoid, but you’ll need the best safety advice you can get during your visit.

How Does Cleveland Compare?