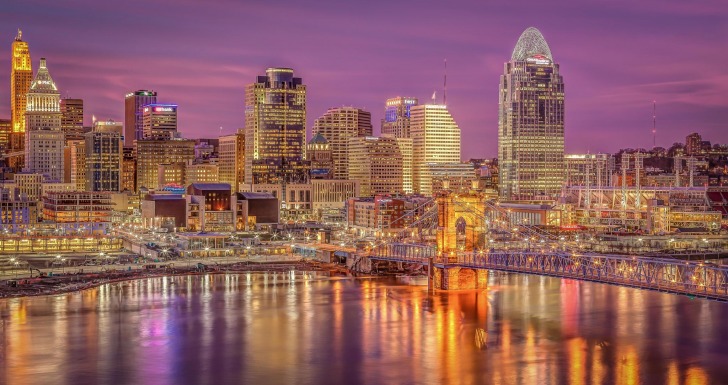 Cincinnati is the third-largest city and the largest metro region in the American state of Ohio.

Cincinnati is known for its flourishing local industrial economy and is home to many world-wide known businesses and companies like General Electric, Procter and Gamble, Fifth Third Bank, Milacron, Kroger, Federated Department Stores/Macy’s, and the American Financial Group.

As for the Greater Cincinnati culture and vibe, there are some things most everyone can agree about.

This is a very cheap place to live, where housing, food, living essentials, and entertainment can be had at prices you won’t find in Chicago, New York or even Cleveland.

Overall, Cincinnati is safe to visit if you avoid some parts of the country. Still, exercise caution as petty and violent crimes do exist although they aren't too common.

Transportation is mostly safe in Cincinnati. You might encounter a reckless driver here and there and pickpockets in trains and bus stations, but no more than in any other city.

Petty theft is the most prominent form of crime in Cincinnati. This mostly includes pickpockets and shoplifting but not muggings, and the most likely crime you'll suffer is having your car broken into.

Ohio is susceptible to natural disasters of all kinds: whether it's floodings, wildfires, tornadoes, tsunamis or heavy snow natural disasters - all these have happened in Ohio and have cost people their homes. However, they're not too common.

Violent crimes aren't an issue in Cincinnati. You can relax and walk around the city carefree and not think about violent crime. Still, avoid dark streets and remote areas that you wouldn't go into even in your city.

Excluding isolated mass shootings, Cincinnati hasn't been the target of any terrorist attacks recently, but the attacks shouldn't be ruled out. Be aware of your surroundings at all times.

There is the issue of scams in Cincinnati, but it isn't any bigger of an issue than in any other city. Always negotiate everything in advance, double check your change and never pay anything upfront. Never accept drinks from strange people or leave your drink unattended.

Cincinnati is safe for female solo travelers. Following basic precaution measures should completely minimize the chances of anything going wrong.

So... How Safe Is Cincinnati Really?

Cincinnati is a safe city to visit, but with several neighborhoods that should be avoided.

First of all, one of the flaws of this city is the fact that it’s consistently in the top 10 most segregated cities in America.

There are not just black and white neighborhoods, but bars, restaurants, schools, movie theaters. It’s not official, but it’s widely known.

And while in some ways this city is somewhat progressive, overall it has very serious systemic issues.

As for crime, it isn’t too big of an issue for the most part, but it happens from time to time.

Similar to this, the Heroine epidemic is really bad in Cincinnati, Northern Kentucky, and Hamilton Ohio ( just 20 miles North).

This violence and drug activity is concentrated in about 4 or 5 neighborhoods in the city and is virtually nonexistent in the suburbs.

This is why you should be cautious when it comes to certain areas and neighborhoods.

As for safe areas in Cincinnati, Hyde Park is a great place to live and it’s relatively safe.

They do have a high number of petty crimes like car break-ins and a bank robbery about once a year; however, overall crime is low.

How Does Cincinnati Compare?