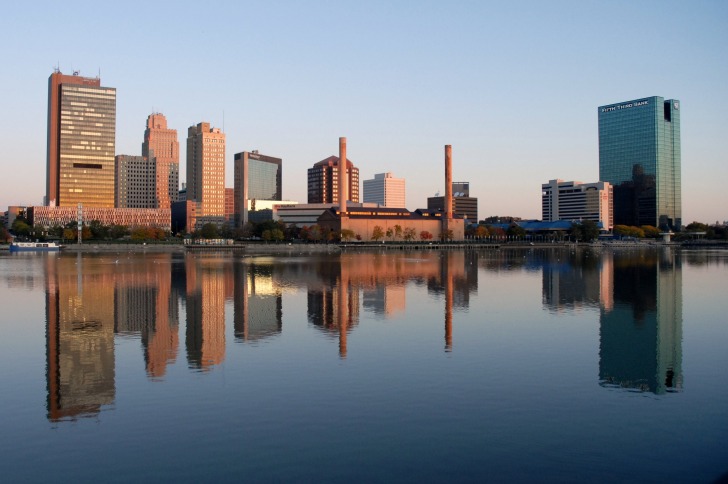 Sitting on the southwest corner of Lake Erie, just below the Michigan state line, is the industrial city of Toledo, Ohio.

It’s known as Glass City for a once prominent glass production industry.

Toledo is a city of 270,000 people but is just an hour south of the much larger Detroit and two hours west of Cleveland.

While Toledo isn’t the industrial powerhouse it once was, there’s still a strong presence of industry and automotive with a surge in community art and cultural improvements.

The Maumee River feeds into Lake Erie but also runs the length of the city, offering great waterfront opportunities in the newly revitalized downtown.

As odd as it might sound, one of the best seafood meals of my life came from the Real Seafood Company restaurant at International Park in Toledo.

The river also adds a tourism element, including the National Museum of the Great Lakes, where “Ship Happens,” as the advertisement reads.

You can also take boat tours on the river into Lake Erie, where you’ll come very close to international waters.

When you’re scouring social media for Toledo ideas, look for #ThisIsToledo, as that’s the official hashtag for the city’s sites, locals, and visitors.

One note about Toledo for those unfamiliar with Rust Belt cities.

Toledo is a working-class town.

The average family income is under $40,000 annually, and nearly 26% of people live in poverty.

As I drove around the city with a friend who lived there, I asked, “where is the fancy part of the city?” and she was honest in that, “We don’t have too much of that here.

But we also have some of the nicest and most helpful people you’ll ever meet.”

Toledo has a medium risk, with a crime rate nearly three times the national average in 2021 and growing even higher in 2022. The city is much riskier for locals as strangers have a 23% or less chance of being a violent crime - provided they follow smart safety steps.

TARTA is the public transportation that runs through the city and suburbs. You can also get a taxi, rideshare, or rental car. You can get a shuttle ride from the Detroit airport to Toledo if you choose to use the larger airport, but it will cost around $100-$150. I flew into Detroit for a Toledo trip but rented my own car at the Detroit airport. It's all highway driving between the two, and Detroit's airport is on the southwest outskirts of the city, making it an easy trip from Toledo.

Just 20 pickpockets were reported in 2021 out of more than 5,000 thefts. That's likely to be due to a city that isn't very crowded or too many opportunities to pickpocket. You should still limit what you carry and keep your wallet in a safe place.

Winter weather and flooding are likely the biggest concerns, but severe weather and tornadoes are also possible. Since every season brings some kind of serious weather potential, you can review the Lucas County Emergency Management plan to learn more.

The robbery rate is twice the national average, but diving deeper into the data shows that 23% of robberies are considered "highway robbery," which is more likely to be a tourist. You can lower your risk even more by avoiding dangerous areas and not participating in risky behaviors.

There's a low risk here, with Detroit being a more likely target due to its size and industry. There is an operational nuclear plant about 26 miles east of Toledo. We'll talk about that safety concern shortly. Even the terrorism section of the emergency management website just addresses the "See Something, Say Something" motto that is common in America.

Women should use the standard caution here, but nothing in the crime data gives extra concern for them. As a woman who visited Toledo, I visited some parts where it felt a little uncomfortable, but I never felt threatened.

By 2023, Toledo will have a newly renovated and improved water treatment plant to avoid algae booms and other contaminants. This renovation also adds ozone technology for additional protection. The water meets or exceeds all required standards and is tested 24/7 throughout the year to maximize safety. One important note - as I started researching this, I noticed through the emergency notifications that a boil order was in place that impacted 15,000 residents. This was due to a pressure issue from ongoing water pipe repairs. You can feel safe that the city will let you know if there's a risk, but you can also call the utility at (419)936-3021.

Safest Places to Visit in Toledo

VisitToledo.org is the official tourism website for the city.

Each year a Visitor’s Guide is published and available for download on this site, too, so you can see the new attractions in the city for every season.

The National Museum of the Great Lakes is one of the best things to see when visiting Toledo.

There are more than 40 hands-on exhibits and boat displays to explore.

The artifacts and history lessons in the museum date back to the 1600s.

The Toledo Zoo & Aquarium is one destination for exploring more than 10,000 animals, with 3,000 of those being aquatic.

Even in the cold winters, you can visit this attraction throughout the year, with special events during all the holidays.

You can play slots, table games, or have a meal at one of several restaurants.

There’s also a live poker room, whether you want to play or watch.

Toledo has an abundance of Metroparks, some along the river and still being developed, others in more remote areas.

You can find a full list of parks at MetroParksToledo.com.

I played a fun game of sand volleyball there on the banks of the river one summer, and these parks are really a great community gathering spot any time of year.

Detweiler Park is one of the parks closest to Lake Erie, with a golf course, water rentals, and wetland wildlife.

If you want to drive around and find the “fancy part,” as I did, you should take a ride through the Old West End.

This historic neighborhood is one of the nation’s largest collections of mixed architecture homes, including Victorian, Edwardian, and Crafstman-style homes.

You can also visit the Toledo Museum of Art while in this neighborhood.

Places to Avoid in Toledo

Crime is pretty widespread in the community, with higher rates north and northwest of the city.

Toledo, being such a working-class town, can make it hard to distinguish between a dangerous neighborhood and one that just looks rundown due to poverty levels.

The safest way to travel is to stay on main roads and interstates.

In 2022, a surge of crime in the Library Village area of west Toledo brought a demand from neighborhoods for more police presence and some kind of action to be taken.

“Definitely be aware of your surroundings, look around and make sure everything is safe, and if something feels off, it probably is.”

There is a grouping of hotels just southwest of this area, so tourists might want to consider staying downtown in east Toledo, but check the crime trends closer to your visit to be sure.

Safety Tips for Traveling to Toledo

So... How Safe Is Toledo Really?

What I found especially interesting was the mayor’s take on the situation.

Here’s what he told the local station, WTOL.

“There is a fear industrial complex in this country that encourages people to sometimes live in fear,” Toledo Mayor Wade Kapszukiewicz said.

“I’m not going to fall for it, and I hope that Toledoans don’t fall for it either.

If you want to be afraid in life, you’ll find a reason.

But I focus on facts.”

While living in Toledo could come with a higher rate of concern, for a tourist, you just need to “stay in your own lane.”

Just 5% of the violent crimes that happened in 2021 were against strangers.

23% of robberies were “highway robberies.”

There is a higher risk for a local resident, as most crimes are against people who know each other.

Toledoans are also very protective of their city.

I’m sure some of you reading this are firing up a comment about how it’s not that dangerous, and it’s nothing compared to bigger cities.

These articles are written for the vast majority of travelers who could be of any age, any gender, and from any sized city.

If you’re used to an urban culture with gangs, guns, and drugs, you’ll have the street smarts to adapt to Toledo.

If you aren’t, I hope this has helped you learn a little more about a fun city.

Is Toledo too dangerous to visit?

How Does Toledo Compare?