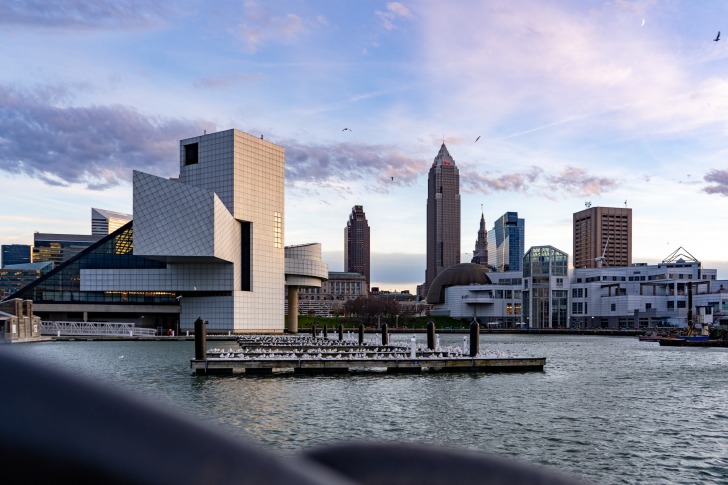 Akron, Ohio is one of the largest cities in the state.

Located just south of Cleveland, the city lies in the Great Lakes region and is close to the shore of Lake Erie.

This gives it a unique climate thanks to the wind moving off the lake, making Akron a popular spot for outdoor activities, including hiking, biking, swimming, and more.

The city has a long and fascinating history within the art movement and played an important role in abolition and the Civil Rights movement.

These days, Akron is still a highly diverse city.

It has many offerings for arts and culture and also provides connections to nearby destinations in Cleveland, Canton, and the Great Lakes.

Akron is a moderately safe city. It scores significantly lower than many other cities in Ohio and is more dangerous than the average American city. On average, Akron’s average annual rate of crime is 35.02 per 1,000 residents. Property crime is the biggest threat in Akron, with theft and burglary scoring highest. It is also worth noting that safety rates vary widely in different parts of the city.

Akron has many options for transportation, including the Metro bus line and multiple taxi companies. Additionally, the city has the DASH, a free shuttle that operates from 7 a.m. to 11 p.m. in the downtown area. These are generally safe, reliable options, though you should always practice caution while traveling.

Akron does not have a significant rate of reported pickpocketing cases. However, property theft is the highest reported crime in the city, so be sure to guard your belongings when you are on public transport or in a public venue.

Akron is generally a safe place and does not face a frequent threat of natural disasters. However, winter weather may cause dangerous conditions, and the area has been known to experience floods and occasional tornados as well as high winds.

Property theft, robbery, and assault were some of the most highly reported crimes on average in Akron. Robbery, which includes mugging, occurred at a rate of 135.7 per 1,000 people. In contrast, the rate throughout Ohio is 66.9 per 1,000 people.

The risk of experiencing a terrorist attack in Akron is very low. There has never been a reported incident of terrorism in the city; there have been few attacks classified as terrorism in the state of Ohio, with most risks in larger cities such as Columbus and Cleveland.

There is a low risk of being scammed as a tourist in Akron. Most reported scams are through phone calls posing as insurance companies, utility providers, or other entities. Tourists are unlikely to be the target of scams while visiting Akron, though you should always practice caution while traveling.

Women face unique risks when traveling, and should be aware of the threat of rape and physical assault. In Akron, reported rapes occurred at a rate of 108.9 per 1,000 people, which is significantly higher than the national average of 38.4 per 1,000.

Generally, tap water in Akron is safe to drink. Bear in mind that many buildings in northern Ohio are older than average, which means they may have lead pipes, which can cause tap water to be unsafe. However, this will vary from place to place. As a general rule, Akron’s tap water is potable.

Safest Places to Visit in Akron

Akron is full of safe and interesting places to visit, including historical and cultural sites, restaurants, and more.

During your visit, make sure to visit the Stan Hywet Hall and Gardens.

This 3,000-acre historical estate belonged to one of the founders of the Goodyear company.

These days, it serves as a museum where visitors can learn about the history of the house and enjoy the beautiful gardens.

If you enjoy the outdoors, you will want to visit the F.A. Seiberling Nature Realm.

This area is located just outside the city, making it a safe alternative to the wider nature preserve, which is more isolated.

Placess to Avoid in Akron

As in most cities, the neighborhoods vary significantly in terms of safety and crime statistics.

While many of the neighborhoods in Akron are considered very safe, there are a few that are better to avoid.

Here are the top places to avoid during your visit to Akron.

The most dangerous neighborhood in Akron is the University of Akron.

This area ranks highest for violent crime and property theft, with 56 percent more crime reported than the rest of the city.

Other dangerous neighborhoods include Downtown, Chapel Hill, and Lane Wooster.

These have significantly higher rates of crime and also feature dangerous housing, which can be a hazard if you are planning to stay locally.

Safety Tips for Traveling to Akron

So... How Safe Is Akron Really?

Like most other cities, Akron is a mixed bag.

It has 21 distinct neighborhoods, ranging from metropolitan to suburban.

Each of these has its offerings and communities and ranges in terms of safety.

So, while Akron’s overall crime rates are much higher than the national average, you are likely to be very safe in some neighborhoods and more at risk in others.

The general numbers look intimidating: the crime rate for Akron metro is 46.38 out of 1,000 when including both property theft and violent crimes.

Alternatively, the safest neighborhoods in Akron are much safer than the citywide average.

Fairlawn Heights, for example, has an average annual crime rate that is 60 percent lower than Akron proper.

Other safe neighborhoods include Wallhaven, whose crime rate is 52 percent lower, and Merriman Valley at 60 percent.

So at the bottom line:

Akron is a significantly riskier city than the average US city.

However, your safety will vary depending on where in the city you are staying.

As always, practice smart traveling and be aware of your surroundings.

How Does Akron Compare?