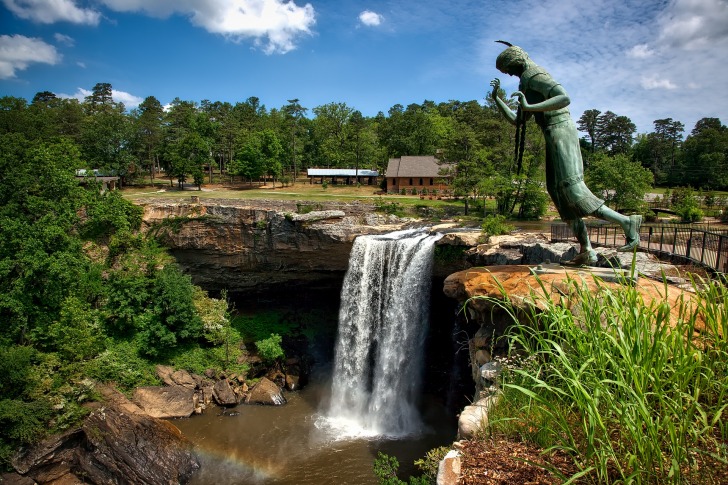 Alabama is one of the biggest states in the southeastern part of the United States.

It’s immediately west of Georgia and is home to some of the most important cultural landmarks in the United States, centered around the American civil rights movement in the 1960s.

The state is also home to one of the greatest civil rights activists in US history, Martin Luther King Jr.

Alabama has a lot to offer tourists when it comes to natural beauty as well, which is why it is consistently ranked as one of the top 15 cities to visit in the United States by Business Insider.

A lot of this is driven by the fact that the state has some of the most beautiful beaches in the country on its southern border along the Gulf of Mexico.

Be sure to stop in Mobile, which has the second biggest Mardi Gras parade in the country after New Orleans, if you are looking for a place to party while you are in Alabama.

Overall the people in Alabama are very friendly and helpful to tourists. There is some violent and property crime, but nothing excessive compared to the rest of the United States. You can feel safe while you travel in and around Alabama without having to take extra precautions.

There is no real risk associated with using taxis, buses, or public transportation while you are in Alabama. Be sure to only use reputable companies if you have to get a taxi and never get in a taxi that is soliciting you for a ride. When you are traveling in Alabama and need a ride, it is a good idea to use a rideshare app to get around.

The chances of getting pickpocketed in Alabama are very low. It's not a common crime in the state for residents or people visiting. As long as you practice basic safety with your purse and wallet, there is an infinitesimal chance that you will have them stolen.

The only real risk of experiencing natural disasters while you are in Alabama is hurricanes along the coast and tornadoes in the northern part of the state. The good news is that both of these things are extremely rare and only happen during certain seasons. There is almost no chance that you will experience a natural disaster while you are traveling in Alabama.

Unless you are in a dangerous neighborhood alone at night, you don't have a real chance of getting mugged. This is not a common crime at all for travelers in the state.

If you have a basic knowledge of scams aimed at tourists, or tourist traps, you should be fine. The only real risk of being scammed while you are traveling in Alabama is online. Make sure you don't give your personal information or credit card number to any sites you don't trust when booking travel.

Women are more at risk than men when traveling within Alabama. Even though this is true, the danger they are in is almost non-existent as long as they practice basic travel safety precautions.

Like the rest of the United States, you can drink tap water in Alabama without any legitimate risk to your health. The water in the state is filtered and treated so that it is safe to drink right out of the tap. There is no need to carry your filtered water.

Safest Places to Visit in Alabama

If you want to get the most out of what the coast of Alabama has to offer while staying as safe as possible, Orange Beach is a great place to visit.

The town is one of the most popular on the coast of the Gulf of Mexico in the United States.

On top of that, it is consistently ranked in the top 10 in the state of Alabama when it comes to crime rates and overall safety.

The city of Orange Beach is dedicated to keeping visitors as safe as possible.

If you want to spend time in the state’s biggest city, Birmingham, book your lodging in Helena.

This will give you great access to the city of Birmingham while staying in the town with the lowest crime rate in the state.

Birmingham has a lot to offer visitors when it comes to the arts, museums, and cultural history.

Alabama is a safe state in general, so there are a lot of safe areas you can choose from while visiting.

Placess to Avoid in Alabama

It is a good idea to avoid Fairfield if you plan on visiting Birmingham during your trip.

Fairfield has had a recent economic downturn, leading to it having the highest crime rate of any Birmingham suburb.

It has the highest rates for violent and property crimes in the state.

Residents there have a 1 in 60 chance of being attacked in some way.

Anniston can seem like a popular destination because the rural town has access to a lot of hiking and other outdoor activities.

The city is located about halfway between Birmingham and Atlanta.

Like other mid-sized towns, it has had problems with poverty and unemployment, which lead to increased crime.

If you are concerned with your safety, avoid staying in either of these places in Alabama during your vacation.

Safety Tips for Traveling to Alabama

So... How Safe Is Alabama Really?

While some areas of Alabama have issues with crime and poverty, the state is relatively safe, especially for tourists.

This is because most of the more dangerous neighborhoods in the state are places that a traveler wouldn’t be interested in anyway.

You shouldn’t have any safety issues during your trip as long as you practice basic safety techniques and have some basic awareness about what you are doing.

Always check the ratings of your hotel before booking.

Google will usually have a rating that tells you about the safety of each one you are considering.

Some hotels near the airport or in bigger city centers could be in dangerous areas.

Overall, you can feel completely safe while traveling around the state.

If you do have any issues, Alabama has high-quality professional emergency response teams at the ready to help you.

Just make sure you have emergency numbers saved in your phone or on your person so you don’t have to look them up.

How Does Alabama Compare?