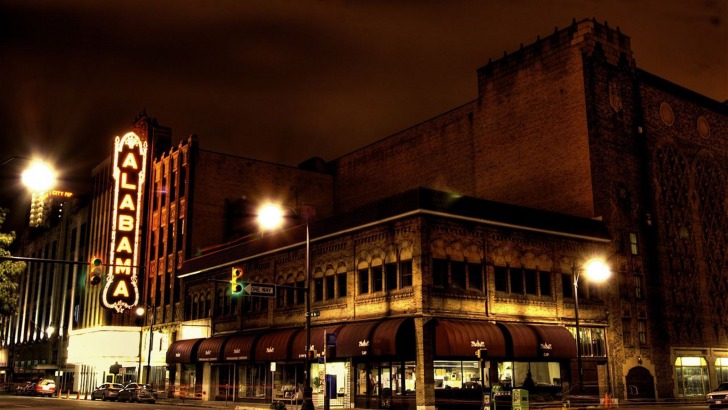 Birmingham, Alabama sits in the center of the state but has been taken over as the largest city by Huntsville to the north and Montgomery to the south.

It’s known as the Magic City for its impressive growth during the early 1900s, but in recent years it has actually lost a sizable portion of its population.

B’ham, as people too lazy to write the whole word out, is a mix of Southern hospitality, a Civil Rights cornerstone, and a bustling city of industry and tourism.

College football is a way of life here, and if you don’t care either way, just respond with the same phrase to the person who said it to you.

The tourism bureau here has attraction passes that cover several days and different categories and cities.

You can stick to B’ham or choose to visit Tuskeegee, Montgomery, and Selma too.

There’s also a family fun pass for those traveling as a group.

This is a religious town with Christianity dominating the landscape.

Sundays are church days, so you might find restricted hours or closed businesses on this day.

Everyone is welcome to attend church and you might even get invited to lunch afterward.

Birmingham neighborhoods are sort of hit-or-miss with safety, but as with most American cities, the city is facing an increase in gun crime. Because of the growing rate and high crime statistics from 2021, there's a medium risk here.

MAX Transit is the public bus system here. Taxis and rideshares are easy to find and rental cars are available at the airport and throughout the city. There's a low risk overall, but use extra caution at bus stops and while riding the bus, as pickpocketers are known to be looking for a crime of opportunity.

There's a medium risk, especially during the holidays, on public transit, and in crowded areas. You should keep your purse or wallet secured somewhere out of sight on your body. A zippered purse is harder for a pickpocket to reach into.

Alabama is known for its tornadoes, and people still talk about the April 2011 series of tornados across the state. Flooding and severe thunderstorms are also possible. Occasionally there might be a snow or ice storm in the winter. Hurricanes can ride up the spine of Alabama, generally being reduced to a tropical storm before they hit. These tropical systems spawn more tornadoes and can dump large amounts of rain.

The robbery rate is 55% higher than the national average, but generally, you won't be a robbery victim if you're only visiting tourist areas during the day.

There's a lower risk here than there might be in Huntsville or Mobile, and there aren't any military bases in the immediate area. The city is home to 200,000 people, which isn't large enough to make it a target right off the bat.

An elaborate scam involved a fake contracting company, and a recent scam involved scammers pretending to be with the local police, but none of these would impact a tourist.

The sexual assault rate here is actually lower than the national average. There's a lot of shopping and sites to see here with fun outdoor areas to explore. If you stick to being out during daylight hours and avoid walking around alone at night, you have a low risk. After dark, the risk goes up.

Safest Places to Visit in Birmingham

You can actually see an attraction on your way out of the airport.

The Southern Museum of Flight is part indoors and part outdoors, with exhibits from several different wars.

You can see Korean War Jets, artifacts from the Tuskeegee Airmen, and the helicopters of Vietnam, just to name a few.

The Birmingham Civil Rights Institute has several permanent along with traveling exhibits that walk you through the past challenges and triumphs of the civil rights movement while still keeping the dialogue going on how to have a more diverse and inclusive future.

Human Rights exhibits are here too.

Note for parents bringing young children – there are some hate crime weapons and KKK costumes here, so decide before you go what is appropriate for your children.

The Negro League Southern Museum is a way to explore America’s favorite pastime through the eyes of the African Americans who played in the distinct league for years.

This is a free attraction.

The Birmingham Zoo takes you through several lands in just one location.

Visit the Alabama Wilds or explore the Trails of Africa.

You can also pay a little extra to get a one-on-one experience with a sea otter or elephant.

Check the schedule of events as some special events happen on weekends, like a live reptile feeding.

There are more than 50 miles of trails for mountain biking or hiking.

It’s versatile enough to include a morning of golf followed by an afternoon at the beach.

Peavine Falls is a great spot with a waterfall and wading pool to cool off on a hot summer’s day.

Just outside the park is the Oak Mountain Amphitheatre, with a great spot for summer concerts.

I saw Train there about five years ago.

The sun was setting behind the stage during the opening acts.

It was just such a magical night.

Don’t miss a chance to drive up the mountain to Vulcan Park.

The sweeping city views are just amazing, and you’ll want a picture or two of Vulcan – the god of fire and forge, to celebrate the city’s industrial roots.

Places to Avoid in Birmingham

Crime distribution maps show a very spread-out crime pattern, with one neighborhood having a lot of crime and just a few streets over there are low crime rates.

As someone who has spent a good deal of time in Birmingham and neighboring Hoover, I can’t say I’ve ever felt unsafe, but I’ve also not been outside at night aside from a concert at the amphitheater.

Historically, the west of I-65 is more dangerous than anywhere else.

There are parts of downtown that are very walkable and enjoyable, and some industrial areas (where you shouldn’t be anyway) are more sketchy.

Also, people in Birmingham are tired of talking about “how dangerous” Birmingham is.

The crime trends are increasing in many key categories based on the national problem of gun violence.

There is a nearly 25% poverty rate in Birmingham, leading to more crime as some people get pulled into a life of crime to make ends meet.

Avoid going to VisitBirmingham.com to get a list of activities to do here.

I was five minutes into my research, even though I’ve been to B’ham a dozen times in my life, and was amazed by all the things that have happened since my last visit.

Turns out, it was Birmingham in the UK.

Safety Tips for Traveling to Birmingham

So... How Safe Is Birmingham Really?

During the first few days of July, there were 13 homicides in the city.

The homicide rate here is nearly 10X higher than the national average.

While the police department doesn’t give data that breaks down the victims of crimes, there are plenty of gang-on-gang crimes.

The police feel handcuffed themselves with enough of a budget or community help to hold criminals accountable.

Community policing programs aim to help connect communities with officers, but when witnesses are too scared to speak up about violence, it poses an ongoing threat to this Southern community.

“Timely information, reporting, and a willingness to assist when necessary is key to reducing crime in each community,’’ Birmingham Police Chief Patrick Smith told AL.com.

“If you see something, say something.

We are losing lives.”

Even when tourists aren’t targeted, these murders and violent crimes happen in public places – a park, a convenience store, the middle of the road, etc.

You should use all the safety precautions you know by heart as if you were visiting the heart of Chicago.

This city is dangerous, but there are pockets of safe and enjoyable areas.

It’s best to avoid the city after dark if you haven’t done enough research to know the places to avoid based on the most recent crime data.

How Does Birmingham Compare?