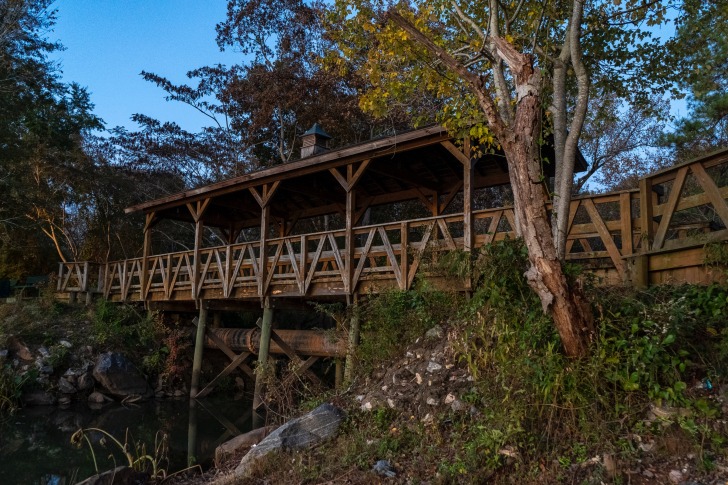 If I was assigned this travel safety article a century or so ago, I could not in good faith tell you to go anywhere near Phenix City, Alabama.

The city, in its infancy, was run by organized crime and filled with illegal gambling and prostitution.

Even the state capital of Montgomery turned a blind eye to the ruthlessness of this town.

By 1954, Marshall Law was declared to get Phenix City back on track to become the safer place it is today.

The name of the city is not a typo.

Unlike Phoenix, Arizona, this city spells its name Phenix City, although the pronunciations are the same.

One thing that does remain the same after all these years is that Phenix City still lives in the shadow of its sister city right across the Chattahoochee (Chat-uh-HOO-chee) River.

Columbus, Georgia has long been the law-abiding side of the state line.

This area is also where the last battle of the Civil War was held, known as the Battle of Girard.

Girard was once the name of the area we now know as Phenix City.

One way that domination is seen is through time zones.

The change from Central to Eastern Time Zone is right along that Alabama State Line, but for consistency, Phenix City is in Eastern Time and the only city in Alabama that is.

Can Phenix City ever fully shake off its shady beginnings?

Can you ever really forget buying votes for $10 a pop or assassinating a man who wasn’t a criminal who won an election?

It almost makes what is a rather bedroom community now a little more curious to know what insanity once ruled the streets.

Fair warning though, some locals say the story of Phenix City has been much more dramatized than it really was.

Well, the majority of people now actually listen to the police, so that's a big chance in the past 100 years. But seriously, there's a low overall risk, but there are still some rough edges around the community.

The Phenix City Express (PEX) is the local public bus system and goes around the Phenix City area, but just has one stop in Columbus. In Columbus, you'll use METRA for bus service. Taxis and rideshares are available. They all come with low risk, but you should be aware of your surroundings at bus stops, especially after dark.

There were just four pickpockets reported in 2020 (2019 had none), so there's a low risk. Those four pickpockets brought in more than $1000 for criminals, so it's a good reminder to not carry a lot of valuables or cash around with you.

The biggest risk here is tornadoes or very severe thunderstorms. A secondary risk is flooding or flash flooding from a tropical system that hits the Gulf and works its way inland. There's a medium risk and you should really know tornado and severe thunderstorm safety before visiting.

There's a low risk. Just 20 robberies were reported in 2020 and 4 of those were robberies in public.

Phenix City itself wouldn't be a target, but the nearby Fort Benning would be, so we've got to put it at medium risk. Military locations are always going to have a higher risk. More than 120,000 soldiers work at Fort Benning.

The scams here are spoofed phone numbers and fraud against consumers at homes, so there's a low risk a tourist would be impacted.

Women should feel safe here, but there's really not a whole lot to do. While the streets are much safer than its history would suggest, it's still not a place to be wandering around looking for something to do. Make a plan before you leave the hotel instead of walking around looking for a point of interest.

According to the latest water quality report from Phoenix City Water Utilities, tap water meets or exceeds all standards.

I’m going to be honest because we’re friends, right?

There isn’t a whole lot to do IN Phenix City.

There is a lot to do NEAR Phenix City.

We start at the Phenix City Riverwalk, where you can walk or bike along the Chattahoochee River.

In warmer months, there are places you can hop in the river to ride some whitewater waves on a kayak, tube, or canoe.

Along the entire stretch of the river between Phenix City and Columbus, you have several places to see dams in action.

As the tour guide of the Hoover Dam in Vegas Vacation said, “Feel free to take all the dam pictures you want.”

The Coca-Cola Science Center is across the river in Columbus, but well worth the extra drive time.

You’ll get to fly to the International Space Station (virtually), get a tour of space history and the NASA Space Shuttle Program, and get a tour of the sky in the Planetarium.

From space to the Civil War, you can learn about some of the best boat battles of the Civil War at the Naval Museum.

You can go inside some of the coolest old school boats and floating fighting devices ever.

If you don’t see some car racing, did you really even go to Alabama?

I’m looking at this in March and there are events scheduled all the way through October, so you’ll always have an option.

Places to Avoid in Phenix City

Crime maps show the highest percentage of crime happens west of the river, east of Highway 280, and south of Railroad Street.

If you’re choosing hotels, pick one that is north of Railroad Street to get the safest option.

There really are only a handful of hotels on the Phenix City side, and you might end up staying in Columbus, Georgia anyway.

You should avoid going over the bridges between the cities during the morning and evening rush hours, as traffic can bottleneck there and lead to delays.

You can’t go around it because the bridges are the only option.

You should avoid haphazardly driving around neighborhoods, especially in that crime-rich zone we just discussed.

While trouble won’t come looking for you here, as with most communities, there is a drug problem here and you just don’t want to stumble in the wrong place at the wrong time.

So... How Safe Is Phenix City Really?

There’s a good battle between “which city is better” – Phenix City or Columbus – in social forums.

Phenix City is always said to be the more dangerous one, but some of that is history.

Here’s how crime breaks down in Phenix City as far as your chances of being a victim:

The real issue in Phenix City is once you leave the riverfront, there’s not a lot to do.

There are industrial areas and then there are neighborhoods.

The city grew north, so the northern part has nicer houses and is generally considered safer.

Crime maps back that up.

Truth be told, it might be better to stay in Columbus just because there’s more stuff to do without crossing the river back and forth.

If you are in Phenix City for a family event, there’s nothing dangerous about staying on that side.

It’s just not a very exciting area – especially not compared to 1922.

How Does Phenix City Compare?