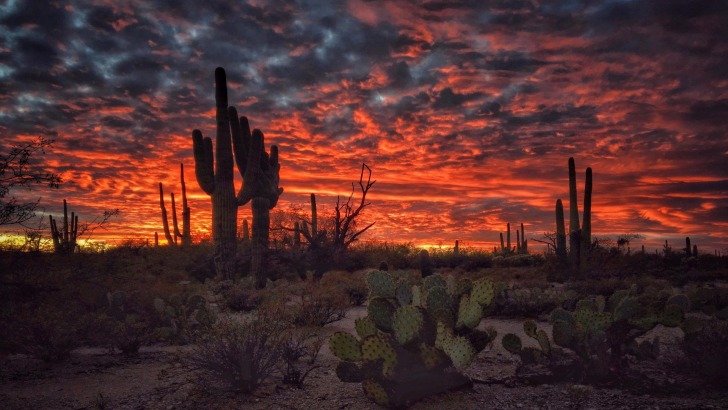 Tucson, Arizona, is known as the Old Pueblo and sits in the southern part of the state just an hour from the Mexican border.

The city is in the heart of the Sonoran Desert with incredible views from anywhere in the city and a winter that is so warm that many retired people choose to spend winters here.

Tucson has a totally different vibe than Phoenix to its north.

This is a laid-back college town with just enough city and just enough space to make you feel totally relaxed.

The prestigious Canyon Ranch spa is just north of town, making for one of the most relaxing (and expensive) places on earth to reconnect and recharge.

Tucson (“Two-sahn”) is a college town too – being home to the University of Arizona.

It’s also a military town with Davis-Monthan Airforce Base on the southwest side of the city and plenty of military museums to explore.

To add to that, Raytheon, a missile defense system maker, is also a prominent business here, along with Bombardier Aerospace.

I’m excited to walk you through Tucson’s safety landscape as I lived here for two years and there’s just nothing quite like desert life.

The average risk for a tourist sticking to the areas designed for entertainment, history, or attractions is low, but the crime rate in Tucson overall is enough to consider it a medium risk. Homicide rates nearly doubled from 2019 to 2021. Theft is two and a half times higher than the national average. However, you're unlikely to be exposed to that if you stick to the safer sides of the city.

SunTran is a public transportation system with fixed-bus routes throughout the city and express routes. You can also explore the Sun Link Streetcar options to get between the most popular parts of the city. Taxis and rideshares are available and rental cars are perfect for those who want to explore the nearby wilderness areas on their own. There are parts of downtown that are walkable, but to get around the whole city you'll need a vehicle.

With more than 17,000 thefts, just 84 of those were pickpockets. Still treat it with a medium risk, especially if you're there on a game day or during a popular event like the Gem & Mineral Show. Carry as little as you need with you, but due to the heat, make sure a water bottle is always among your belongings.

Tucson's biggest risks are wildfires and flash flooding. Extreme heat is another concern, but that's really dependent on how you react and prepare for the heat more than the heat itself. Summer thunderstorms can be intense, but short-lived. There are also dust storms, known as "haboobs," that can sweep through and limit visibility.

While the robbery rate is two and a half times the national average, the risk of a stranger in a public space being a mugging victim is 34%, according to 2021 crime data from the Tucson Police Department (TPD).

Normally, a city with half a million people wouldn't be considered too high on the risk list, especially with a major metro area like Phoenix nearby. However, the presence of the air force base and missile manufacturing company plus the aerospace industries raise that risk level. It also brings a lot of security, including from border patrol with the border town of Nogales just 70 miles away.

TPD reports in 2022 that scams are on the rise, but they are generally started via phone or email to local residents. Scammers like to prey on the elderly, so use extra caution if you're in that category. You might be approached by people who speak broken English or broken Spanish, and if you don't know what they are saying, learn the phrases for "I cannot help you. Call the police" so you can walk away.

Tucson can be a very fun town, especially with the college atmosphere on Congress Street. It can also be dangerous for women who overindulge and become easy targets for thieves or more sinister criminals. Always travel with a friend or in a group. If you are alone, text a friend or check in on social media with every step you take so you'll be traceable - just in case. Don't go hiking alone if you can avoid it in the Sonoran desert. It's very easy to get lost if you aren't an experienced hiker.

The 2021 Water Quality Report shows full compliance and no violations in Tucson. The biggest water challenge here is having enough of it, as Arizona, California, and Nevada share a water supply that is dwindling. You can learn more about important water conservation steps on the city website.

Safest Places to Visit in Tucson

VisitTucson.org is the official website for the city’s tourism bureau.

People are known to spell Tuscon wrong, interchanging the C and S.

I checked the URL, and even if you type it in wrong, it will redirect to the correct website.

When in doubt, look for the “2022 Tucson Conventions and Visitors Bureau.

All rights reserved.” at the bottom of the page.

Tucson has a large landscape, with I-10 running the north/south length of the city (even though it’s an east/west highway in the big picture) and I-19 also resumes south of downtown.

There is also a city-within-a-city here, as South Tucson is its own entity right in the center of Tucson.

South Tucson is heavily Latino/Hispanic and has services for the 5,600 people who live there, from ethnic grocery stores to street tacos to community services.

Let’s start at the perimeter of the city to look at the outdoor adventures that await:

I highly recommend taking the drive up to Mt. Lemmon, so you can see the different ecosystems and topography change with the elevation.

Mount Charleston up by Las Vegas has the same amazing transition during the drive.

Just outside of Tucson to the southwest is Karchner Caverns State Park.

Reservations are required and there are cabins and campsites available, plus a cool cavern to explore.

Watch out for the bats.

A Mountain (that’s the name – “A Mountain.” It’s not “a mountain.”) is right on the east side of town and is an easy hike with worthy views for those who don’t have the time to hike the outlying parks.

Since traffic is so intense in Tucson and there aren’t a lot of highways to help you get around, let’s start near Pusch Wilderness for the museums in that part of the city:

Downtown is where the University of Arizona (U of A) is located, along with the bustling Congress Street for restaurants and bars with eclectic shops along the route.

The Children’s Museum of Tucson is also here.

On your way to the southeast side of the city attractions, you can visit the Reid Park Zoo.

Around Davis-Monthan Air Force Base, you have several great attractions to choose from.

The Airplane Boneyard is the largest of its kind in the world and includes rows of different military aircraft as far as the eye can see.

The retired aircraft thrive in the desert climate and tours are available, but read the website for specific information about safety and tour requirements.

The Pima Air & Space Museum is an 80-acre site with six indoor hangars to explore with some of the most unique and interesting aircraft the U.S. military and government have used.

The Aerospace exhibit gives you an unprecedented look at the race to space and the use of drones in modern military action.

Also, the Wild West town of Tombstone is just an hour southeast.

You can read our article on that city to learn more about the safety guidance and attractions there.

Places to Avoid in Tucson

When you look at crime distribution maps, you’ll see higher crime areas in the northern part of town, but south of Oro Valley.

There are some midtown and east-side neighborhoods that aren’t very safe.

A handful of southern neighborhoods aren’t ideal either.

The reality is, Tucson is built in a way that you can have new homes with HOA-handpicked property designs, and then be a poverty-stricken area around the next corner.

Just stay on the main roads between the different tourist attractions and entertainment districts and you shouldn’t have to worry.

Alvernon Way is one road that connects to some of the more dangerous neighborhoods, so use that just as a reference point, not a “stay off it no matter what” statement.

Before you consider a day trip to the Mexican border, check out the travel warnings from the U.S. State Department.

Nogales is in the state of Sonora, which comes with a “Reconsider Travel” advisory.

Safety Tips for Traveling to Tucson

So... How Safe Is Tucson Really?

Tucson is seeing an increase in crime, much like other American cities.

While the violent crime rate was 80% higher than the national average in 2021, it’s even growing during 2022.

The biggest problem in communities like Tuscon is the influx of illegal guns on the street.

This issue continues to face American’s second amendment right to bear arms and leaves a solution hard to find.

And the state of Arizona, ours, is exacerbated by the fact our state legislature has completely tied the hands of local jurisdictions.”

There are gangs here and drug problems, even more so because of the proximity to the border where drugs and guns are brought in.

29% of thefts are related to car break-ins, so lock your doors and keep the windows rolled up when you park.

Leave nothing inside either.

Make it as empty as if it just came off the factory line.

Six cars are stolen each day here too, and many end up across the border – never to be seen again.

In reality, a smart tourist using common sense and safety precautions is more likely to get a bad sunburn than be a victim of a crime.

Just avoid the neighborhoods that clearly aren’t a place you should be visiting.

For the utmost safety, stay in Oro Valley to the north, which has a much lower crime rate.

How Does Tucson Compare?