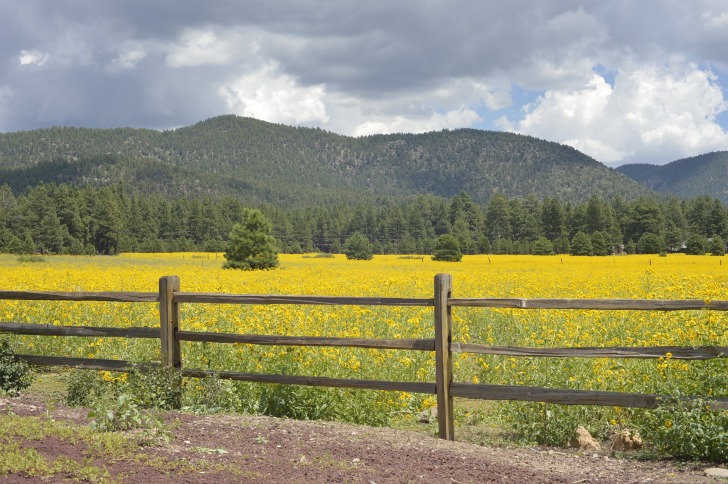 Take your trip to new heights in Flagstaff, Arizona.

The city itself sits at nearly 7,000 feet above sea level and is home to a ski resort at 9,000 feet leading to the tallest peak in Arizona, Mount Humphreys, at 12,600 feet.

The city is home to Northern Arizona University, giving it a college town vibe with some nightlife to complement the daytime outdoor activities.

It is a smaller town of fewer than 80,000 people and doesn’t so much as have a Costco (that’s the #1 complaint from locals).

You are really going to need to love the outdoors to visit Flagstaff, as it’s surrounded by forests and it’s smack dab in the middle of the country’s largest ponderosa pine forest, Coconino National Forest.

One of the benefits of staying in Flagstaff is how close you are to so many natural wonders in all directions.

The city’s name comes from 1876 when settlers whittled a flagstaff out of ponderosa pine and put a U.S. flag on top to celebrate the nation’s centennial.

The name “Flagstaff” stuck and the city grew into the picturesque community we know today.

Coconino is pronounced in many ways by people, but the proper pronunciation is “Coe-cuh-NEEN-oh.”

If you say “Cocoa-Neen-oh” you won’t get too much grief.

There's a low overall risk. We do have some specific higher crime issues to discuss, but overall this city is not only safe for tourists, but it's also welcoming to them. In fact, since the pandemic struck, so many people have moved to Flagstaff (realizing they can work from home) it has driven housing prices up.

The Mountain line bus system is the public transportation option, but honestly, this is a city designed for walking and biking. There is an urban trail system set up that people use daily. Taxis and rideshares are an option too. All of these have a low risk.

18 pickpockets were reported in 2020, but that's still a low risk. Thieves got away with $50 on average per theft. It's a great reminder to carry as little as possible and leave valuables at home.

There are several things to keep an eye on throughout the year. Wildfires and flooding in the summer and spring with snowstorms and blizzards in the winter. There's a medium risk because of all of that, and make sure to study up on safety through the Coconino.

There's a one in 1873 chance of being robbed in Flagstaff, and I'd say that is a low risk. The city does have a crime prevention hotline if you have more questions about that topic. That number is (928)774-1414.

There's a low risk of terrorism here. The bigger targets of Las Vegas, Hoover Dam, and Phoenix are a few hours away, so Flagsgtaff might get some residual impact from an attack or a rush of people escaping, but probably wouldn't be a direct target.

There is a low risk of being scammed and that might be because the Flagstaff Police Department does such a good job of letting people know about common scams. Check out its website under the "Avoid Being Conned" section.

Women should be safe to travel here. There were 39 rapes reported, which is slightly more than the national average, so it's always wise to watch your surroundings, especially if you're leaving a bar at night.

There's no risk when using the tap water of Flagstaff. The quality meets or exceeds expectations. Even with a national standard of assessing risk levels for drinking water supplies, the risk in Flagstaff is low. Cities like Sedona have a higher risk.

Safest Places to Visit in Flagstaff

Snowbowl is the place to ski if you love fresh powder.

There are beginner lessons available if you are as bad of a skier as I am.

This isn’t a small-town ski resort.

There are 55 trails, four parks, and three mountain lodges to warm up.

Going in the summer?

No worries, you can still ascend 3,000 feet on the ski lift to catch breath-taking views of the forest.

I got REALLY distracted writing this looking at the web cameras of Coconino National Forest.

You’ll see some plants that thrive at high altitudes and can’t grow near sea level.

In all my years of hiking, I’ve never seen a bear, which is probably a good thing because my last words would be “Who’s a good bear?

We’ll go through bear safety in a bit.

Wupatki National Monument is incredible with the remains of a community from the early 1100s.

These villages called “pueblos” were home to indigenous people and it’s amazing how many of the structures still stand all this time.

The Flagstaff Extreme Adventure Course is a great way to test your strength and physical skills without having to climb a mountain to do so.

There are obstacle courses and ziplines.

Don’t worry about the kids, there’s a special course just for them.

A trip inside the Riordan Mansion is an incredible throwback to the start of the 20th century.

The home was designed by the same architect who designed the prestigious Grand Canyon hotel.

Tours are available as self-guided or with a docent.

Places to Avoid in Flagstaff

Crime maps show the incidents are pretty spread out all over the community.

The more north you go, the lower the crime rates get, but the population also goes down.

The city saw a spike in violent crime during the pandemic, with no real easy-to-connect dots as to why that happened.

It’s got a small-town feel, but there’s also more crime than the police or citizens would like.

There are plenty of programs and initiatives between law enforcement and community members to keep you safe.

I do want to talk about the one thing you definitely need to avoid in Flagstaff — Altitude Sickness.

Depending on where you live, your body might have a hard time adapting to a daily base elevation of 7000 feet.

This means you might start breathing heavier or faster to keep oxygen in your body.

Overexerting yourself leads to altitude sickness.

You have to give your body time to adjust, even if it means extending your vacation a day or two on both ends, to get the best experience possible.

Signs of altitude sickness from the Cleveland Clinic:

Depending on your home elevation, fitness level, age, and health history, it could take a few hours or a few days to get adjusted.

Talk to your doctor before visiting Flagstaff just to be safe.

Safety Tips for Traveling to Flagstaff

So... How Safe Is Flagstaff Really?

Flagstaff is a fun city that almost outgrew itself.

The streets aren’t really built to accommodate all the traffic from locals, tourists, and the university.

This leads to traffic problems.

When the city tries to do construction to expand, there’s more traffic trouble with road closures.

It does seem odd that a city of 80,000 people doesn’t have a big box store other than a Walmart.

It’s just another sign that the city grew quickly with neighborhoods but the roads and amenities didn’t necessarily keep up.

As for crime, it’s another thing the city is trying to tackle with all the growth.

It’s not a dangerous city at all, but the growing crime areas make it rank on some “most dangerous cities” listings just because of the crime values compared to national levels.

Property crime and violent crime are both above the Arizona average.

Property crime is above the national average, but violent crime is below.

The city generally has fewer than 5 homicides a year, and four years of the past decade had none.

When looking at the crime numbers, perspective is good.

For example, looking at the theft rate.

This is a city where a lot more people ride bicycles by percentage than other cities. 95 of those thefts were bicycles.

Also, when you take shoplifting (43% of thefts) out of the theft category, because that’s not a risk to you as a tourist, the risk goes down to one in 87.

It’s just an example of how sometimes crime rates that look high can really be pinpointed to a particular reason, not an inherent risk to a tourist.

How Does Flagstaff Compare?