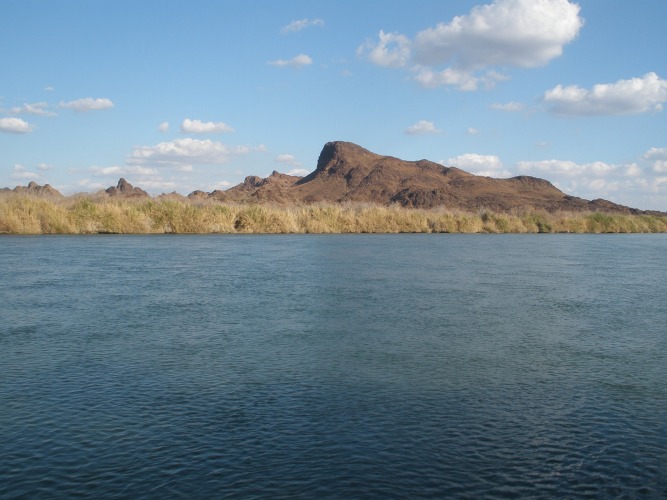 You’re not going to find a sunnier place in the country than Yuma, Arizona.

The city gets 332 sunny days each year and less than 4 inches of rain annually.

This is a sun-soaked sensational getaway.

The city lies just 22 miles from Mexico on the banks of the famous Colorado River.

It’s a great location halfway between Phoenix and San Diego.

It’s a popular place for snowbirds in the winter to get away from harsh winters up north.

The city of 96,000 doubles in population from April through November when the senior citizens arrive for their winter pilgrimage.

This struck me as odd until I dug into it a bit more.

One of the best tourist attractions is Yuma Territorial Prison.

I cringed at the thought until I saw the full name was Yuma Territorial Prison State Park.

It’s an old prison meant for tourists, not an active prison.

The wetlands draw thousands of people each year looking for a respite from the summer heat.

Yes, I burned the lead.

From June through September you are going to be dealing with highs near 110°(F) on AVERAGE.

How can a town that’s so hot be so cool?

There's a low risk in Yuma County as all crime categories are below the national average according to 2020 FBI data. There are some hot spots for crime, but overall you should have a safe visit to Yuma.

Yuma County Intergovernmental Public Transportation Authority (whew, that's a mouthful), otherwise known as YCAT, is the low bus system. It provides plenty of stops throughout town. Fare is $2 one way, but if you're staying a while, you can get a 10-day pass for less than $20 and a 31-day pass for $60 and it can be purchased online. Taxis and rideshares are also available. Shuttle services to the major cities will have to be booked through private companies. All of these have a low risk, as long as you're watching your back at bus stops.

Theft has really been on a downward trend in Yuma since 2013. The number of thefts peaked at 2388 in 2013 and was down to 1412 in 2020. No pickpockets or purse snatching were reported, so there's a low risk of that happening to you.

Extreme heat is the biggest risk here and it's a BIG risk. There's a medium risk because a lot of people visiting Yuma from cooler locations really can't wrap their heads around how hot it can get here and how that heat impacts a body. You don't have to worry about big storms, tornadoes, winter weather, or hurricanes here, but the heat is enough of a concern to be in a class all itself.

Of the 49 robberies reported, 12 were robberies in public. There's a low risk it will happen to you, but you should still practice good personal safety techniques to help keep that number low. One interesting point: of the 12 people who were robbed in public, the thieves got away with nearly $9000. That's a $750 average per person. If you are out, don't carry large amounts of cash or valuables with you.

I've got to give this small town a medium risk, simply because of the military presence here. There's the Marine Corps Air Station Yuma along with the U.S. Army Proving Ground. Terrorists love to go after military bases, but the bases are also very secure and aware of the terrorism risk.

The Yuma County Sheriff's Office (YSCO) has a website section dedicated to scams, but none of the recent ones would impact tourists. There's a low risk. I have heard of a scam in Southern California that could spread to Yuma. It's a lottery scam where a person who speaks little English approaches a mark and says they won the lottery but can't cash the ticket because they aren't U.S Citizens. They ask for the mark to give them money in exchange for the (bogus) ticket. Don't fall for this.

The sexual assault average is below the national limit, but there were 68 rapes reported in the county. There's low risk if you're on your game and pay attention to your surroundings. We'll go through some of the parts of town to avoid in a little bit, but just proceed with caution, but not fear.

The water is safe to drink with low risk. Since so many people visit here from other places, there are questions or complaints about the taste of the water. I thought I'd share how the water utility company from Yuma explains this, "The source water for our desert community, whether it has traveled 1500 miles across the continent in the Colorado River or percolated through the sandy rocky soil into the water table, has picked up a lot of minerals and more than a little flavor."

Safest Places to Visit in Yuma

Yuma Territorial Prison State Park is a great place to start as it’s a great spot to see and it’s close to other safe spots.

The prison dates back to the 1870s when the granite walls held more than 3,000 prisoners in its time.

Most recently, it was used in the movie 310 to Yuma.

There are rumors that if you go into one of the prison cells a ghost will tap you on your shoulder.

Are you brave enough to find out if that’s true?

Nearby is Colorado River State Historic Park, which is the former home of the U.S. Army Quartermaster Depot.

There’s a museum on-site and picnic areas, plus incredible views of the river.

Head to downtown Yuma for an old west feel with a modern flair.

There are shops and restaurants along the way with some of the oldest homes you can find in this section of the desert.

To see one of those homes, check out the Sanguinetti historical site.

It’s a replica of what life was like for a merchant working in Yuma in the late 1800s.

Don’t forget to try one of the mom-and-pop local restaurants, as the food in Yuma is divine and so affordable.

For a true beach oasis, head to West Wetlands Park, where there’s actually a beach on the Colorado River.

The Stuart Vincent Wolf Playground is a great option for kids to blow off steam in one of the most creative playgrounds you’ll ever see.

What makes this playground more special is that when it was first built someone set it on fire.

It had to be rebuilt and the community came together to do so.

There are also three casinos in and around Yuma, so you can get inside the air-conditioning and try your luck at a slot machine or table game.

Don’t forget to tip the waitress!

I hesitate to recommend places that are far away from the specific city, but too many social media sites and YouTube videos say this next recommendation is a must-see.

The Imperial Sand Dunes are about an hour away from Yuma in California but offer open miles of nothing but white sand and it is a very popular ATV spot.

Places to Avoid in Yuma

It’s no surprise that along the interstate in Yuma is where the highest crime numbers are.

This is how many cities are, so don’t get worried about that part.

The farther east and west you go on I-8 and in the county, the lower those numbers go.

There is a neighborhood nicknamed “Okie Town” that is near the intersection of 16th Street and Arizona Avenue that has a reputation of being a “bad neighborhood” with gang activity.

According to a 2019 news investigation, police said there were nine active gangs in Yuma recruiting people as young as middle school students to join.

Avoid any neighborhood where there is a lot of graffiti.

Another sign of gangs is a group of people dressed similarly walking around.

Yuma has many safe places, but there are some dangerous gang and drug activities that happen here.

Safety Tips for Traveling to Yuma

So... How Safe Is Yuma Really?

It’s safe enough that 100,000 snowbirds come down here every year, and if a senior citizen feels safe being here, everyone else should as well.

I took crime statistics for this from the Arizona official report because the FBI website was giving conflicting information, but here are the risks of being in Yuma in common concerning crime areas.

You also have to factor in that some of that violent crime is going to be gang-on-gang incidents, and another portion is going to be a domestic situation.

Of the 20 homicides reported in Yuma County in 2020, none was an attack on a stranger.

It’s interesting to see the locals respond to the snowbirds.

One social media poster said, “The rudest humans on earth come to town in the guise of Snowbirds.”

Others complained about the slow driving of the snowbirds.

I can attest that when I lived in Florida, the snowbirds drove at a speed so slow it’s easy to become unhinged.

However, nobody is complaining about the revenue they bring to the area, so how about we all just respect the elders, huh?

How Does Yuma Compare?