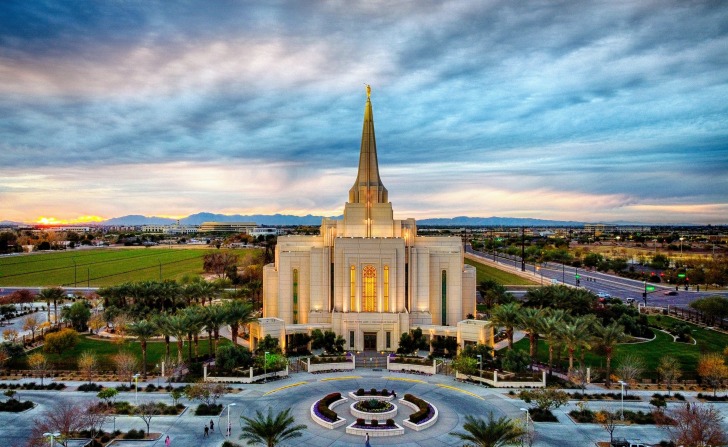 Gilbert, Arizona is nestled in the southeastern part of the Phoenix metropolitan area.

It has a more eclectic vibe than its neighboring cities and big brother city of Phoenix.

Gilbert ranks as one of the “Safest Cities in America” according to WalletHub in 2020.

Its food scene is getting national attention as well, whether you want big-name chef dining or mom-and-pop restaurants.

A community farm welcomes visitors and offers food and gardening tips with a nature preserve nearby.

If you’re in the mood for an old town Main Street, Gilbert has one, as well as a modern open-air shopping mall.

This city is a great getaway from the big city life while still having those amenities nearby should you choose to explore them.

You won’t forget the uniqueness of this blooming Arizona city that has seen the population grow nearly 10 times in the past three decades.

Gilbert, Arizona, comes with a low overall risk. A growing population with a lower crime rate through 2019 puts it near the top of the FBI's safest cities list. There's a one in a thousand risk of being the victim of a violent crime.

There is a low risk in Gilbert when hopping a ride. The Metro Valley rail and bus system goes through Gilbert, and you can grab a cab or rideshare. These options come with government or company license requirements. Gilbert is going through a master-transportation plan that should be done in March of 2022 to revolutionize travel in Gilbert. Biking is also a popular way to get around.

The theft rate in Gilbert is almost half that of similar-sized cities in the metropolitan area, giving it a low risk. It's not a typical tourist destination, so thieves might be more likely to hit the bigger draws like Glendale or Scottsdale.

Medium risk of natural disasters exists in Gilbert and all Arizona cities. While locals tout the more than 300 days of sunshine, they sometimes fail to mention the summer monsoon storms that build up quickly and can be fierce with heavy rain, lightning, and thunder. There's also a wildfire risk as the Western United States is in a 20-year drought. Fires can impact air quality and road accessibility. With Gilbert being on the fringe of the metro area, it might be closer to the line of fire than other cities.

The low theft and violent crime rates give it a low mugging risk. This doesn't mean you should let your guard down. Crimes of opportunity will be the most likely, so protect your belongings and be vigilant as you explore this unique city.

There's a low terrorism risk outside of the Hoover Dam portion of Arizona. The dam, which provides water resources to several western states, has long been a hard target of terrorists and is protected accordingly. That dam is nearly five hours away from Gilbert.

You are at low risk of being scammed as long as you are aware of the common scams happening nationwide. Nothing about Gilbert makes it more likely to have scammers than anywhere else.

Women face a low risk while visiting Gilbert and if they want some company they can reach out to the active Meet Up groups that do a wide variety of activities in town. The low crime rates make this an ideal getaway for a female traveling alone or with friends. The Gilbert Police Department also offers a Self-awareness Program for Women to learn more about solo safety.

The City of Gilbert Water Quality staff are always testing the water—sometimes up to 100 times a day. This gives tap water a low risk. The tap water also meets EPA and state water quality standards.

Safest Places to Visit in Gilbert

The charm and elegance of downtown Gilbert’s Main Street is a big draw. Locals call it the “Heritage District.”

This is where you want to indulge in a meal of your choice and you’ve got 30 options to choose from, including award-winning restaurants.

You can also build up that appetite by shopping at the boutiques that line the street for a one-of-a-kind find.

Regardless of when you visit, there’s probably going to be some kind of festival happening in the Heritage District.

The Farm at Agritopia is a community garden blooming in a neighborhood that is based on the principle of sharing.

Tree-lined narrow streets welcome tourists in to give and take gardening advice.

To get more outdoors, check out the Riparian Preserve at Water Ranch.

This 100-acre plot of land is designed to re-use the water supply, but the city decided to make it a tourist attraction as well.

Bike and walking paths weave around the area with excellent opportunities for wildlife viewing.

Places to Avoid in Gilbert

There isn’t a place in Gilbert that isn’t safe for tourists.

Even crime maps show there’s mostly a low risk of crime in every neighborhood.

That’s not surprising for a city built on family traditions and community gatherings.

With the low crime rate and family vibe, you are going to be hard-pressed to find a nightlife hot spot in Gilbert.

That means you might have to venture to other, higher-crime areas to get an exciting night out on the town.

Safety Tips for Traveling to Gilbert

So... How Safe Is Gilbert Really?

When the FBI says a city is one of the safest in the nation, you can’t argue with it.

In a city of a quarter-million people, only one murder happened in 2019.

The Gilbert Police Department has made a conscious effort to prevent crime from happening and bring people to justice when they commit crimes.

The Gilbert Police Chief reacted to the city ranking as one of the safest cities nationwide by saying, “Gilbert’s safe city ranking could not be possible without the department’s dedicated employees who serve and protect our community and the support, relationships, and involvement of our residents.

We will continue to work with our community and take a data-driven approach to proactively reduce crime and keep Gilbert safe for all.”

How Does Gilbert Compare?